The problem is that in doing so, people who aren't necessarily handicapped or disabled will have an easier time using facilities that aren't meant for them. | 22 Words 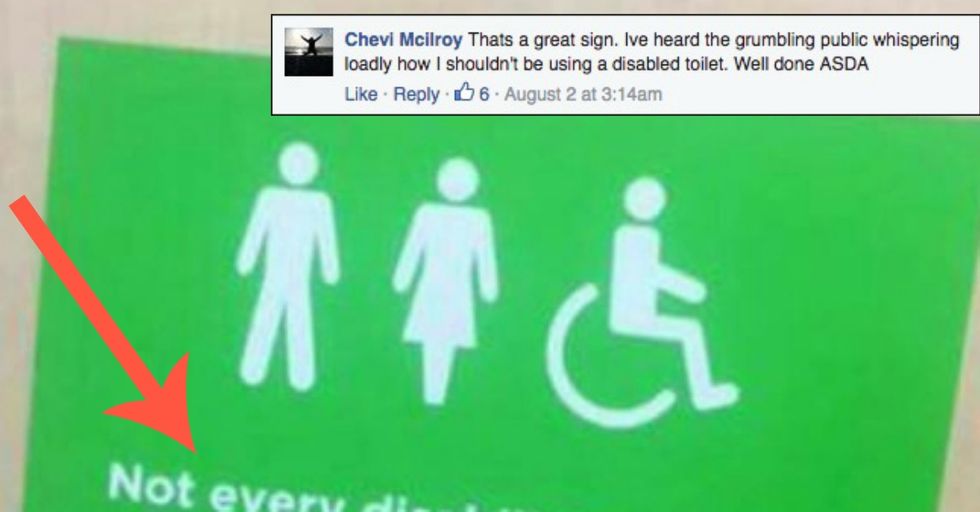 There are numerous examples of disabilities that aren't necessarily visible to the public eye and those people have been called out for using a handicap parking space or disabled bathroom. It's unfortunate and frustrating, but it happens.

Historically, people have a way of equating disabilities with obvious visual cues.

It's understandable, but that doesn't mean it's correct to use those assumptions solely.

There's a lot that can go on in a body that doesn't manifest itself visually.

Well, there's a really good reason for that. Placards and plates designate handicap status on cars, but people in public areas don't feel the need (thankfully) to hang one around their neck to let the world know.

Fortunately, one outlet made a change to let the world know that they shouldn't fly off the handle when they see a "normal" person using a handicap restroom.

It's a small change, but one that's sure to have a big effect on the people who need it.

Of course, there's some unintended collateral damage to this decision, but we'll get to that shortly.

Here's what the crafty company did to help ease the burden of disabled customers.

That's why ASDA, a supermarket chain in the United Kingdom owned by Walmart, made a change to the signs on their bathrooms, reminding the public that invisible disabilities do exist.

The charity Crohn's and Colitis UK shared the change on their Facebook page, and the comments of praise reinforce how important something like this can be.

And this mother whose daughter can't handle public bathrooms.

And those who have been kicked out of other bathrooms despite a necessity.

Most of all, people hope that other stores soon follow suit.

Hopefully this is a sign of good things to come. But, about that drawback...

The problem is that in doing so, people who aren't necessarily handicapped or disabled will have an easier time using facilities that aren't meant for them.

That might just be the cost of doing business, since, ultimately, the decision of whether or not to monopolize a bathroom for differently-abled people rests with a person and not the company operating the restroom.

Also, the process on occupying a handicap restroom isn't clear to everyone.

We know that parking in a handicap space is a fairly black-and-white issue, but what about restrooms? Can we use those when others are occupied and there aren't others in need waiting to use them?

People seem to be split on the matter, as having to use the restroom can be construed as an emergency for EVERYONE.

But obviously, priority needs to be given to those in need. Where do we draw the line?

I mean, those parking spots need to be clear!

Until we can reach a consensus on this, maybe we just follow common sense and decency.

It's just crazy enough to work.