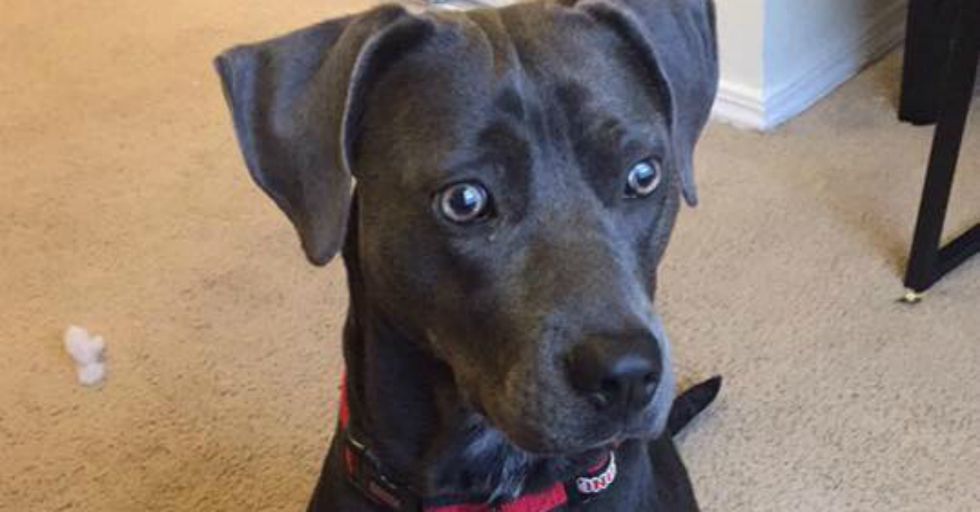 It's no secret that Hurricane Irma has caused a lot of destruction. Floridians were forced to evacuate, and many of them have been left with no homes or possessions. Sadly, they'll have to rebuild and replace almost everything. But while Irma is surely the biggest headline, the stories we love to hear are the ones that speak to the kindness and generosity of the human spirit.

Jessica Lewis and her dog, Luna, are just such a story.

Forced to evacuate ahead of the storm, Jessica, a student at Georgia Southern, needed to head out of town right after her final class. This meant going straight to Atlanta, without going back to get Luna.  As it would be to any loving dog owner, this was out of the question. So she went out on a limb.

A quick note to the teacher was worth a shot.

Hoping against hope for the goodwill of her teacher, Jessica sent a polite request to bring her furry buddy, Luna, to class. She attached a few pictures to make her plea.

Letting sleeping dogs lie is a good way to make your point.

When in doubt, it's a good idea to send as many adorable, sleeping dog pictures as possible. There's no hard and fast rule here, but it can't hurt.

Because who could say no to that face?

Even the hardest of hearts would have trouble putting the kibosh on bringing sweet Luna along. Luckily, Jessica's teacher, Joshua Kennedy, is a standup guy.

He quickly showed a good-hearted and laid back approach to helping his student out.

Calling him "cool" probably didn't hurt, but Jessica's teacher was more than willing to step up to the plate and do what he could to help the two evacuate safely.

With a precious dog at stake, her owner was relieved at the positive response.

No doubt a huge stress off her shoulders, Jessica was thrilled with the message from her teacher. "He responded in literally a minute and I pretty much screamed and ran outside to show my roommate."

They made it safe and sound. Even if it was a tiny bit nerve wracking.

When asked about it, Lewis recounted the miniature adventure. "She's actually awful on a leash and we've had a hard time training her with it, so she dragged me across campus on the way there, but once we got there and she was in the classroom no one had a single complaint about her. She loved it."

Once Jessica and Luna made it to class, everything seemed to work out fine. "She just walked around the classroom and got pets from everyone and made friends. The students were overall pretty excited about it when they saw her. They just took notes while they petted her and we all laughed together (professor included) when she did something funny."

It looks like an overall great day in class.

I'm not sure how much note-taking was going on, but it seems like everything turned out for the best. Cuddling a cute dog and mostly paying attention to your teacher could probably be considered a win-win.

We're collectively "awwww"ing over this.

From the looks of it, Luna not only made friends, but let her owner pay attention to her classwork as well. In the end, both Jessica and Luna got out safe and sound. And everything, thankfully, went according to plan.

It sounds like Luna got cuddles from the whole class, and it's more than our little hearts can handle.

If you're a dog and have to evacuate, getting as many hugs as possible, on your way out, is a good action plan.

In these dark times, we all need dogs to make it better.