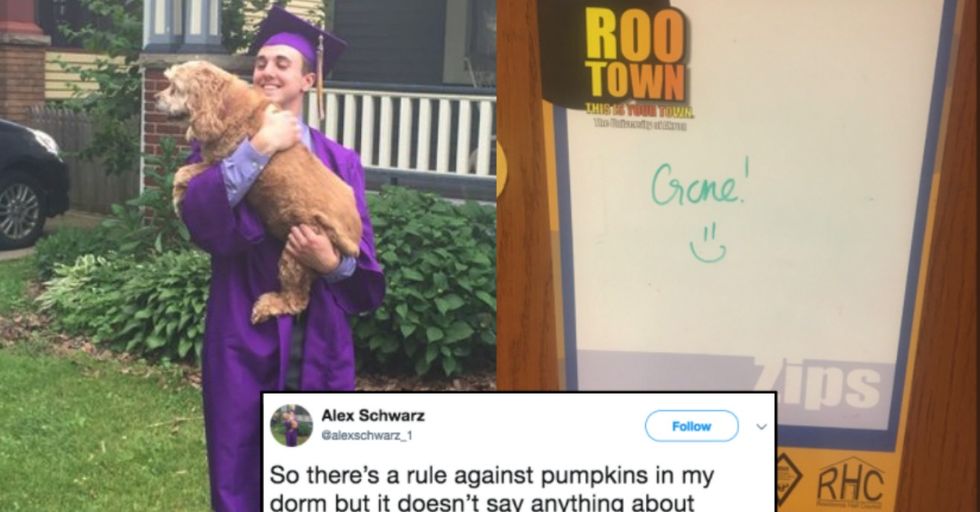 College dorm halls are unique places. Hundreds of 18-year-olds are living away from their parents for the first time and learning how to exist outside the bubbles of their hometowns. People are sharing bathrooms. People are learning about Bob Marley. People are watching Pulp Fiction. Students are lining their bunk walls with posters of both of the aforementioned things. People are cooking ramen noodles inside coffee makers.

There's a lot of chaos going on in dorm buildings, so resident assistants have to enforce some ground rules in an attempt to keep their freshly adult-ing residents from burning the place down.

One of those rules at the University of Akron was a ban on Jack-O-Lanterns.

Alex Shwarz, a student at University of Akron (UA) was not pleased with this rule.

He really wanted to have a Jack-O-Lantern in his room to get into the Halloween spirit. So... the jokester found a way around the restriction.

So there’s a rule against pumpkins in my dorm but it doesn’t say anything about pineapples https://t.co/PypAvVyVOa
— Alex Schwarz (@Alex Schwarz)1509123082.0

"So there’s a rule against pumpkins in my dorm but it doesn’t say anything about pineapples," he wrote. The tweet went viral, but the pineapple didn't last long.

The RA on duty took the pineapple away, to Alex's dismay.

But Alex wasn't finished. He was determined to get in the Halloween spirit. And he would only accept decorations that resembled a Jack-O-Lantern.

In retaliation, he carved eight different Jack-O-Lantern faces into apples and set them out in the hall on display. We'd love to see a tutorial on how to carve faces into a fruit as small as an apple.

Whether you think he's a smart alec or a genius, you've gotta admit that this guy is creative!

What would you carve into a Jack-O-Lantern if you couldn't use a pumpkin? We hope you have a Happy Halloween, whichever way you choose to decorate!