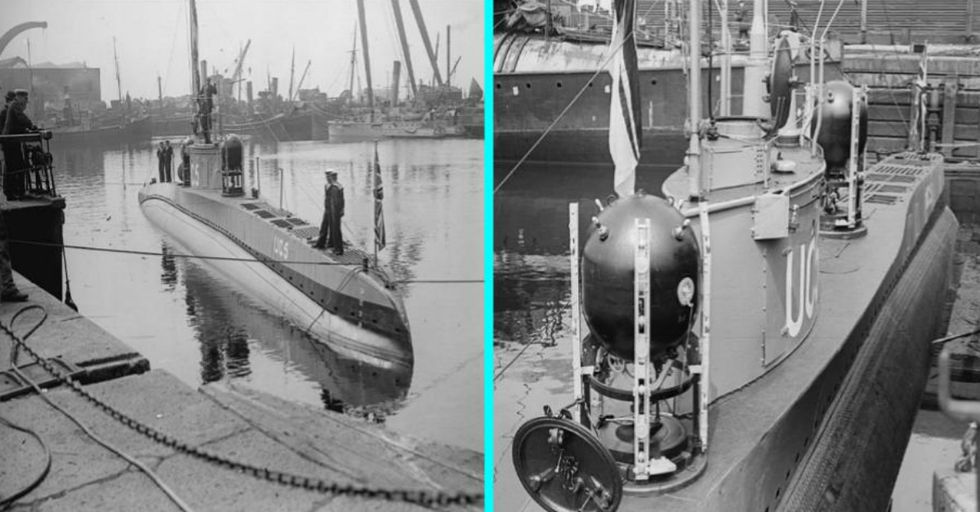 The smallest details about World War I are fascinating, especially to history buffs. From military uniforms to battlegrounds, one of the most intense periods of human history does not fail to both enlighten and horrify even the most casual of scholars. The good news is that it's all written down for us to take in.

In what looks to be a shocking turn of events, historians have discovered what appears to be a submerged German submarine off the coast of Belgium. The most macabre detail, however, is that the craft contains 23 intact bodies.

The type UB-II submarine seems to be in decent shape.

In good condition according to experts, the UB-II is currently lying about 100 feet below the surface of the water, just slightly off the coast in the North Sea. Researchers have been reluctant to share the exact location due to fears of possible looting and destruction.

It's no small discovery.

Exploring the finer points of the submarine could take some time. It's reported that the vessel is about 88 feet long, 20 feet wide, and lying on the sea bottom at roughly a 45-degree angle. Documenting every inch of it will undoubtedly involve countless hours of painstaking work.

This is a landmark finding that has set the historical and media worlds up for a lot of new tidbits about German submarines. Other WWI enthusiasts have been quick to share the exciting news. The above tweet contains a sketch of what the sub may have looked like in its entirety.

It's obviously not unscathed.

Though the vessel looks to be in amazing shape by today's standards, there was damage sustained on the upper side, mainly contained in the bow. Upon closer observation, the hatches were all closed. Because it's so well-preserved, it proves to be a great opportunity to study, more closely than ever, aspects of the historic WWI era.

There will be obstacles.

In the remarkable underwater footage of the UB-II, it's clearly that the vessel is a maze of barnacles, seaweed, and coral. Up-close investigation won't be without its challenges. Still, West Flanders Governor Carl Decaluwé summed up the overall reaction to the discovery. “It’s quite amazing that we found something like this," he told BBC News.

Check out the amazing video.

In a bid to bring history alarmingly to life, researchers have recorded up-close footage of the UB-II in its current state. The diver exploring the resting site goes to great lengths to give viewers an intimate look at the outside of the craft. Like everyone else, we're floored to get the chance to scope out what was once an imposing war vessel.

It was possibly sunk by a mine.

Although the exact details are still being nailed down, it's thought that this particular UB-II was sunk due to a mine explosion. This would've been par for the course. Navigating the waters during WWI was the epitome of dangerous. The photo above shows U.S. survivors of a sub sunk by a similar German sub.

We learned some details about the crew.

No one knew the danger of sinking better than those crewing the submarines. Indeed, today's soldiers on the water realize that same potential for peril. Decaluwé relayed to reporters that this type of submarine generally held about 22 crew members. And from what researches have discovered, it looks as though this particular submarine was no different.

There appear to be 23 bodies.

From the looks of it, all 23 crew members from this particular UB-II appear to be intact and preserved inside the vessel. Due to the massive passage of time and exposure to the elements, this is an exciting discovery for researchers. We're intrigued — but a little freaked out as well.

The discovery is rare, but not unheard of.

While uncovering the UB-II is certainly remarkable, it's not an isolated discovery. The Belgian coast is actually a hotspot for sunken craft. In total, this is the eleventh sea vessel to be found in and around that location. The bodies inside, however, do present a unique key to the past. The crew is gone but not forgotten. There's no question that this coast was a veritable beacon for sunken craft and lost lives. Allied and German forces alike now claim it as their final resting place. It's no surprise then that Belgium's North Sea Minister is rumored to be looking into whether the UB-II can be classified as a heritage site.