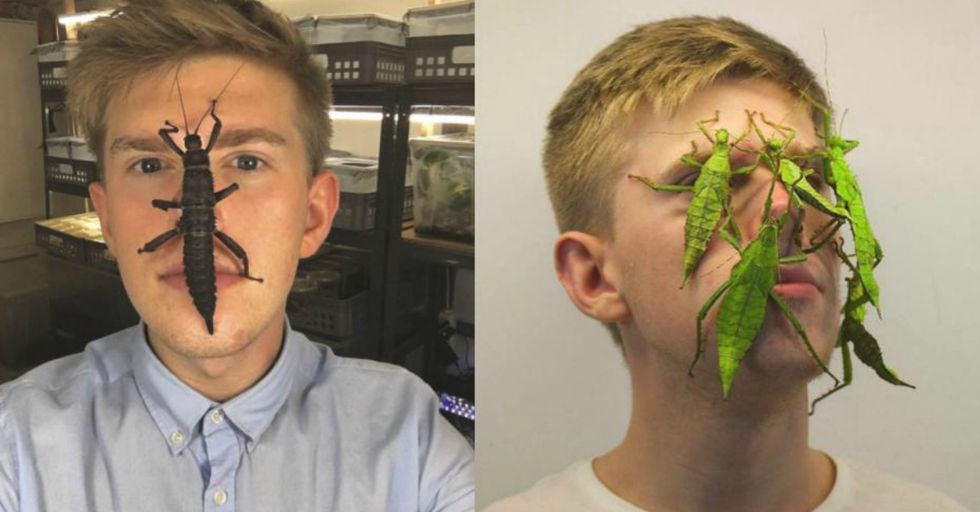 If Jack Hanna and Steve Irwin taught us anything, it's that the world is full of interesting animals and insects. Some of them are adorable enough to cuddle. Others are aggressive hunters that move at lightening speed. And some of them are just downright terrifying (We're looking at you, great white shark.)

Then there are the creatures that fall into the "well that's bizarre" category.

There's no shortage of such living oddities, and no one knows that better than an insect breeder who recently shared a giant creature of the mollusk variety on social media.

Most of us love animals, especially the dog and cat variety.

What's not to be thrilled about? Unless you're completely not a pet person, dogs, cats, and all other domestic animals pretty much radiate affection. They're soft, furry, and make cuddling up on the couch during Netflix binges even more enjoyable. They complete us, and so we buy them ridiculous amounts of toys and treats.

But move into odd creature territory, and there's a good possibility we get creeped out really fast.

While the collective public tends to gravitate toward furrier friends, when it comes to creeping and crawling beings, the enthusiasm wanes just a bit. Most people don't want to take the huge spider they found in the dark laundry room for a walk. They want to whack it with a shoe. Also on the "gross" list: other creatures like roaches, ants, and centipedes.

While snails aren't too strange, they still have a certain creepy factor.

For most people, snails, are kind of like insects in terms of the "ick" factor. But because they're relatively small and tend to hide under inconspicuous ricks in the garden or yard, they fly largely under the radar. The fact that they're technically mollusks — not insects or rodents — doesn't hurt.

This handsome guys actually lets all of nature's oddities get to know him personally.

Meet Adrian Kozakiewicz. He's an insect breeder behind Germany's Insecthaus. With a fearless and loving attitude toward all the world's creepiest and crawliest, Kozakiewicz has no problem getting up close and personal with all types of multi-legged friends. He has an vested interest in both insects and snails.

Not many people would fit that title, but cruise through Kozakiewicz' Facebook page, and it's easy to see he has no issues with letting his "work" roam where it wants to. He's one with the bug universe, and seems to love studying his subjects in and out of their natural habitats.

Educating the public is extremely important to him.

Because he's blessed to have a curious attitude toward nature's creepy-crawlers, instead of being terrified, Kozakiewicz is a huge advocate for getting to know the creatures we seem to actively avoid. He's excellent at sharing new species with his social media followers and educating them on little guys they probably would've stepped over or hit with a newspaper.

As far as crawling things are concerned, he's the coolest guy in town.

It doesn't take a scientist to see that the budding entomologist is ridiculously popular on all his social media accounts. With hundreds of thousands of dedicated bug lovers following him on Instagram and Facebook, Kozakiewicz has a fan base that's listening and hangs on every insect and snail detail.

One of his more recent offerings was a giant snail. GIANT.

When he's not letting bugs crawl all over his face, Kozakiewicz has a penchant for dragging huge snails out to parade on social media. The specimen above is a giant West African snail, a breed that can grow almost eight inches long and live for up to ten years. It's not just your garden variety snail. Mostly because it's closer to the size of a small cat.

That snail's got the moves. Albeit, extremely slow moves.

In the fascinating video above, the insect enthusiast does the public an amazing service by letting the average viewer get a closer look at how the incredibly large snail moves. It's slow and steady, and also kind of mesmerizing to watch. His adorable handler makes the video a slam-dunk in the entomology world.

Everyone loves a giant snail. At least if it's from Insecthaus.

Far from being revolted, the comments from Kozakiewicz's giant snail video range from delighted to over-the-top enthusiastic. For this Facebook commenter, it was just another amazing post from an awesome natural science whiz. Nothing like one-upping your co-workers when it comes to insider snail info.

The giant snail may be as big as a guinea pig, but that doesn't stop some people from wanting one.

This Facebook fan echoed the sentiments of many others who were following Kozakiewicz's snail post. More than a handful of people thought the idea of having one as a pet sounded absolutely fantastic. One commenter even stated that she rubs her own snail down with coconut oil. Interesting. We're still not sure if we want one ourselves, but it's clear that Kozakiewicz is going places, and he's bringing all sorts of interesting creatures with him.