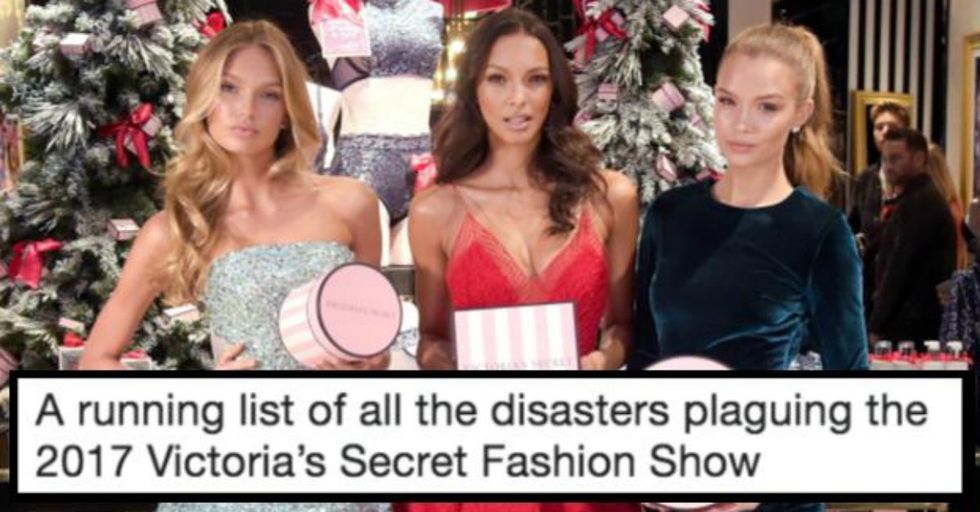 Looks like this year's Victoria's Secret is already coming apart at the seams. The lingerie extravaganza is scheduled to happen next Monday in Shanghai, China, but the Republic's notoriously finicky diplomats have already banned two of the evening's brightest stars – Gigi Hadid and Katy Perry.

Every year, the Victoria's Secret Show is one of the biggest fashion world events.

It always features an amazing roster of the hottest models, the most popular acts, and a front row dripping in celebs.

This year, however, the show's producers decided to do something different. They decided to host the show in Shanghai. There's only one problem. China's visa process is notoriously difficult.

According to Page Six: "For every artist who wants to perform in China, officials comb through their social media and press reports to see if they have done anything deemed to be offensive to the country. Maroon 5 was banned a few years ago because one band member wished the Dalai Lama happy birthday on Twitter."

For wishing someone "Happy Birthday?"

Sure, it's the Dalai Lama, and China has historically not had the best relationship with Tibet (to put it lightly) but still. All the man did was wish another person "happy birthday."

In any event, China also bans anyone it deems as having done a more serious crime. Case in point, Katy Perry.

In 2015, Perry did a concert in Taiwan, a country that China sees as its breakaway province. Basically, China feels Taiwan is part of China, and Taiwan feels otherwise... and then in the middle of all this popped Katy Perry.

During the performance, Perry wore the Taiwanese flag as a cape and a dress with sunflowers on it.

Sunflowers, fyi, had been adopted by anti-China protestors the year before. China, to put it lightly, was not amused.

When the singer put in her visa application, it was denied. Perry definitely will not be headlining the fashion show. Instead, Harry Styles will now take that honor.

But China wasn't done yet. Supermodel Gigi Hadid was stunned to find she wouldn't be walking in the show either.

Well, not stunned, per se, since the model had ignited a furor on Chinese social network Weibo earlier this year when footage emerged of her holding up a Buddha and squinting her eyes in a seemingly racist way.

Hadid issued an apology for her actions via Weibo.

She stated, "I have learned to be very careful of how my actions can come off or be portrayed, and I'm hopeful you'll accept my apology."

Nevertheless, China denied her apology, and her visa (because, no to racism) forcing Hadid to announce that she would not be walking in the show.

"I'm so bummed I won't be able to make it to China this year. Love my VS family, and will be with all my girls in spirit!!" the model posted on Twitter.

Still, Perry and Hadid are not the only performers banned from China for the Victoria's Secret Show. Models Julia Belyakova, Kate Grigorieva, Irina Sharipova, and Adriana Lima have been denied visas as well for issues ranging from racist incidents to "diplomatic issues." Models, ya know.