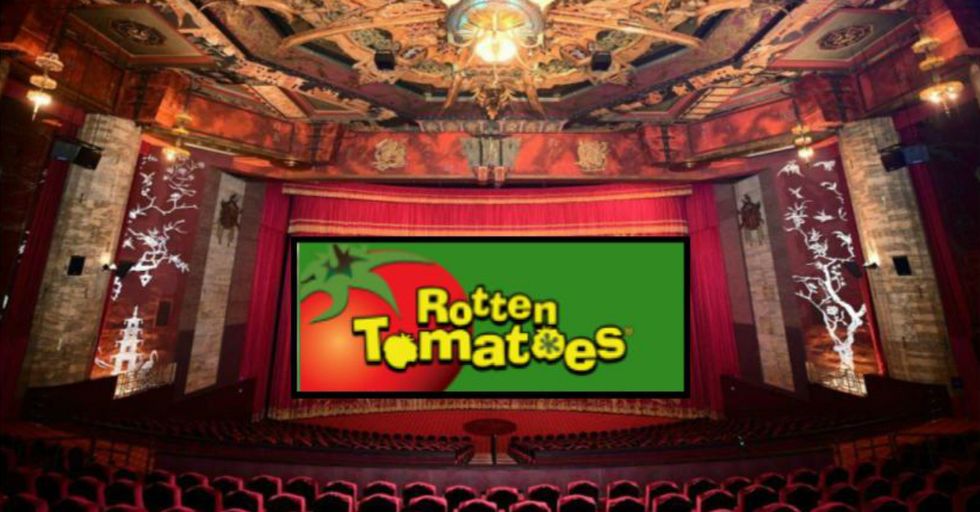 In 1999, Toy Story 2 blasted into theaters. The movie, which followed the efforts of toy spaceman Buzz Lightyear and his pals to find and retrieve his bestie Woody was met with near universal acclaim. Of the 163 reviewers who watched the film, all 163 marked it certified fresh on Rotten Tomatoes, a review aggregation website for film and TV.

It was a nearly impossible feat, one that has remained unmatched... until this week.

Do you know how hard it is to get a perfect Rotten Tomatoes score?

First, you have to get a crap ton of reputable reviewers from reputable publications and sites to agree.

No, you can't use your friends or contacts, which is what some of those perfect Rotten Tomato-scored films with only five or six reviews do. You actually have to have professional reviewers who review films for a living to agree that your film is good – or, in the parlance of the Rotten Tomatoes site, "certified fresh."

Toy Story 3 was the second heavily reviewed film to come close to having a 100% fresh rating. 145 reviewers had watched the film and proclaimed it excellent.

That was, until Armond White, a notably finicky reviewer, tanked the score. Toy Story 3, he sniffed, "strictly celebrates consumerism." Then again, White has never been a fan of Pixar. Of the widely celebrated Wall-E, he opined that the story was "ugly, end-of-history cynicism."

In his slasher of a review for Toy Story 3, White revealed that he's simply not a fan of the genre.

"I admit to simply not digging the toys-come-to-life fantasy (I don’t babysit children, so I don’t have to) nor their inevitable repetition of narrative formula: the gang of animated, talking objects journey from one place to another and back–again and again." Well, damn.

But even White's cold, cold heart was warmed by the new film that has a perfect 100%, certified fresh score from 165 reviewers.

Of the film's semi-autobiographical  source material, he cooed that it has an "authenticity makes the film likable." He even had glowing words to say of the teenaged lead actress, opining, "She brings to mind the young Vanessa Redgrave’s prodigious intelligence that turns girlishness into womanliness." By now, you may be wondering what paragon of cinematic excellence warmed the cockles of Armond White's cold heart...

It was Lady Bird, of course!

If you, like most people, haven't yet heard about Lady Bird, it is the directorial debut of actress Greta Gerwig, which premiered at the Telluride Film Festival in Colorado to rave reviews.

Gerwig is known for rising up through the mumblecore film movement.

Mumblecore is a movement "characterized by naturalistic acting and dialogue (often improvised), low-budget film production, an emphasis on dialogue over plot, and a focus on the personal relationships of people in their 20s and 30s."

Gerwig has had roles in Mistress America, Damsels in Distress, and To Rome With Love.

Basically, she's one of those actresses whose face is super familiar, and whose name is definitely rememberable, but you just can't ever place it. Gerwig originally set out to be a playwright, but turned to acting when she couldn't get into any MFA programs.

In addition to directing Lady Bird, she also wrote it.

The indie feature, which has already made $11 million off a $10 million budget, meaning it's already earned back its budget and more, is semi-autobiographical, as it is based loosely on Gerwig's life.

The plot of the movie seems like basic teenaged angst-fare.

Indiewire describes it as a "relationship comedy," which "stars Saoirse Ronan as Christine McPherson (Lady Bird, no relationship with the wife of LBJ), a rebellious student at a conservative Catholic Sacramento high school who wants to escape her family and small town constraints to go to college in New York."

The film boasts a robust cast of known faces and up-and-comers.

Laurie Metcalf, Lucas Hedges, Tracy Letts, Timothée Chalamet, and Beanie Feldstein all star in the indie vehicle. Metcalf plays Ronan's formidable mother, with whom she is at loggerheads for most of the film.

Critics have all given the film glowing reviews, hence it's perfect score. Unfortunately, haters have already come out the woodworks.

One particularly acidic reviewer named pee t (not an error, he or she literally spelled their name this way) had this to say of the film: "It's old, it's boring - it's actually just another movie about the tyranny of the entitled. I'm speaking of Gerwig, Baumbach, Franco and their ilk. I'm speaking about the squandering of resources, the line jumping diversion of opportunities for people of merit and talent, and the crap the public is repeatedly fed by this latest version of The Brat Pack ..." "They are tiresome elitists who seem too busy at being their insular ideas of clever/hip/whatever to produce anything of merit. Face it, Gerwig is not clever, or very bright, or funny. She has zero talent - she just has connections that have connections that have... She is, as others have rightly pointed out, an oblivious racist too boot. Ah well, in these culturally bankrupt Trumpian times, what can we expect? Go Greta!" Okaaay....

Another naysayer had a much milder, more nuanced bad review.

"This was NOT FUNNY," James I of somewhere on the internet said, "I was sooooo angry they said it was a comedy. If its not a comedy don't say it is, just like The Martian is not a comedy or a musical (Really Golden Globes?) Is it a nice story, meh. It's obviously a the bio pic of a friend of a "green lighter" at the studio." Cool, point taken. Anyway, Lady Bird is in select theaters. You can see for yourself whether it's good or not.