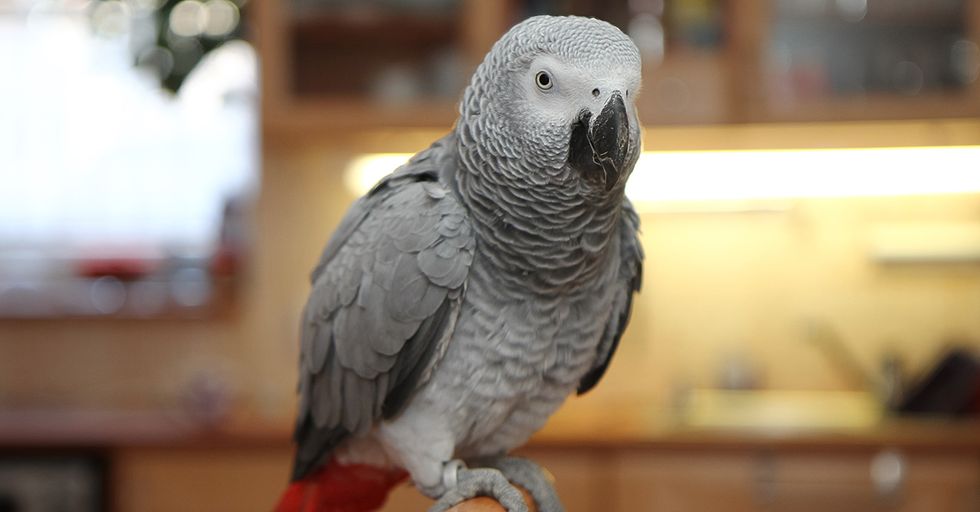 If you have Alexa in your home, you know that it makes life a little more interesting, for many reasons. Having a talking robot in your house that can tell you the weather, order you a new coat, list the ingredients for your favorite recipe and play Justin Bieber's music, makes you feel like you're living in the future.

But with progress, comes pain and sometimes, Alexa bites back. One bird loving family experienced a little bit of technology trauma when their pet bird started becoming BFFs with Alexa, and not in the best way.

This parrot with a potty mouth started to use Alexa for his own benefit. The lonely bird loves to swear, and the popular electronic system loves to listen.

It's a crazy world we live in. These days, technology can operate as more than just a piece of metal, it can become a friend to rely on.

If you have a pet, whether it's a dog, cat, bird or lizard, you know it's not really debatable when it comes to explaining how important they are to you. You wouldn't be the first, or the last, to say that your pet is your best friend.

It's about to get twisted

So what happens when the two most important non-human things in your life pair up and become besties behind your back?

It's like any romantic comedy– it always starts with a clever and unique story of how the two met and what brought them together. The background story is everything.

Rocco is an African Grey parrot with a bit of a bad boy background.

He's had his fair share of run-ins with the bird law.

Marion Wischnewski, Rocco's owner, adopted him after he had some trouble with the parrot police at the National Animal Welfare Trust sanctuary in the United Kingdom.

"Wischnewski, who worked at the sanctuary, took pity on the boisterous bird after he cursed and threw his water bowl around," an article reported about Rocco.

Now we know to never piss off Rocco or he'll cuss you out, and throw things across the room. Don't cross this guy.

I wonder what a parrots' go to swear word is? Rocco could be a four-letter word kind of bird, or maybe he throws out lengthy expletives that don't really make a whole lot of sense. A girl can only wonder.

Sweet Marion took Rocco under her wing (speaking metaphorically) and learned to deal with his brash ways.

Marion also has an Amazon Alexa in her home– an electronic accessory she uses often. If you have Alexa, you know how easy and convenient it is to talk to her. She's friendly, obedient and informative. What is there not to like?

Remember when Alexa lost her voice?

Alexa loves to talk, and Amazon did a hilarious commercial where Alexa "loses her voice" so they replace it with celebrities such as Cardi B and Gordon Ramsey. It's truly hilarious.

Alexa is a staple in many homes today. Even kids feel the need to converse with the electronic personal assistant. All this sweet girl wants is for Alexa to play baby shark, and it's the cutest argument in the world.

What makes having a pet bird so entertaining is their ability to repeat back words and sentences to other people. Some can even sing songs. They are incredibly intelligent animals, capable of repeating words from their owners, if trained properly.

So when Rocco heard his owner speaking to this Alexa person, he figured he might as well do the same.

Alexa, you've got a new friend

While Marion is at work, Rocco strikes up conversations by ordering the items of his birdie dreams.

On Rocco's list of ordered items include watermelon, strawberries, light bulbs, ice cream and a kite.

I think he forgot something

He should probably be ordering some soap so he can wash out his potty mouth– but to each their own.

Who would have known?

It's amazing what is on a birds' Christmas list. I would have never known that a bird with a potty mouth would want a kite so bad. I want to say I am shocked but I honestly had no idea what kind of things birds wish for.

Keep a close eye on this guy

Marion often has to check her Amazon account everyday to see what Rocco has added to the list, because who knows what this bird is capable of.

"I have to check the shopping list when I come in from work and cancel all the items he's ordered," Marion said in an interview with Daily Mail.

I mean I might keep the ice cream orders if I were Marion. Rocco is the real MVP for ordering some sweets. I like the way he thinks.

There are way worse things he could have ordered. Rocco has pretty great taste for a bird.

When he's not ordering kites, he's ordering Alexa to play some tunes for him to listen to while his owner is at work.

“I come home and he’s playing all sorts of music," Marion reported in The Times. It's like leaving a teenager at home by themselves; you always come home to loud music and random food all over the house.

What kind of music does a swearing, kite-loving parrot listen to? Kings of Leon and Foo Fighters. It doesn't make sense but at the same time, it makes all too much sense.

Marion said she's come home to Rocco dancing to his favorite bands and chatting with Alexa to pass the time. Rocco has learned to entertain himself and with the help of Alexa, has just enough friends to have a good time.

Marion was forced to put a parental control on Alexa to make sure none of those spontaneous bird orders went through.

Looks like Rocco will have to stick to swearing because he's not going to be getting any new adventures with his attempted Alexa orders.

Smart runs in the family

Other parrot owners came forward online in response to this story stating that their parrots pick up on things like this too, noting how intelligent these creatures are.

But so does swearing

Another Twitter user said her parrot has a potty mouth, too, meaning Rocco has a few friends with similar habits.

I guess there are other parrots out their who love to shop around, even if it's for a bunch of wood piles.

@thetimes Y'all can play with these computer "assistants" and home robots if you want but don't act surprised when… https://t.co/MvujkAnV7G
— divaD (@divaD)1545070661.0

This would make an awesome movie but now I'm terrified that this could be true. Alexa plus the animal kingdom would take over the world.

@WendyLite4one Good he can’t order food because they would get thousands of boxes of crackers
— difficultmusic (@difficultmusic)1545075407.0

This guy has got a good point. The whole house would probably be filled with saltine crackers if Rocco had it his way.

Who would have ever guessed that a bird and an electronic personal assistant would become such good friends? It's definitely a hilarious, and happy ever after. Share this article with your friends to get a good laugh!