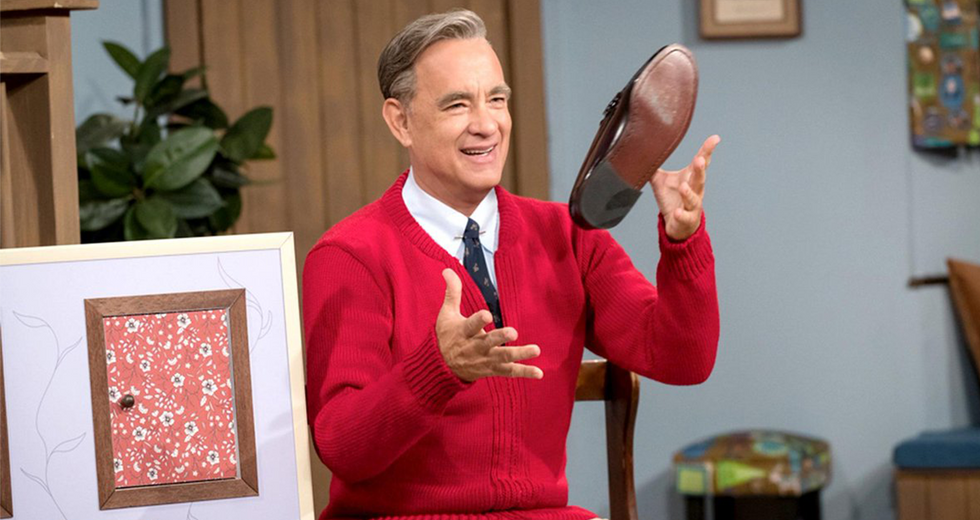 This Sweet Video of Tom Hanks as Mr. Rogers Will Make Your Day

Recently, it was announced that Tom Hanks would be playing Mr. Rogers in an upcoming film called A Beautiful Day in the Neighborhood and the entire world celebrated. Now, we have actual proof that Tom Hanks is the perfect Mr. Rogers. Sony released image of Hanks dressed exactly like Mr. Rogers and honestly, it's breathtakingly similar.

The internet is freaking out in the best way and, just by looking at the pictures, we are confident that Hanks is going to nail the role of Mr. Rogers. I mean, is there anything Tom Hanks can't do?

Well, he's 62 years old. But he cannot be stopped.

Who didn't love "Cast Away"?

"Forest Gump" taught us all how important it is to run.

It was a love story like nothing else of its time. If you didn't cry in this movie, then you have insane will power because this one is an emotional roller coaster.

"You've Got Mail" was the first online love story.

Hanks swept us off our feet and was an instant 90's heartthrob. I was even tempted to start a fan club based on this movie.

"Sleepless in Seattle" was a classic romantic comedy.

He voiced our childhood in "Toy Story".

Growing up and watching Mister Rogers' Neighborhood taught kids about empathy, kindness, and joy. It was the purest television show for kids to watch and left an everlasting impact on the those who watched.

The show ended in 2001, after 31 amazing and joyful seasons. Every episode highlighted the importance of children and told stories that focused on inclusion and sensitivity towards difficult subjects.

Get ready for "A Beautiful Day in the Neighborhood".

With Tom recently gravitating towards playing real-life roles, like Walt Disney Saving Mr. Banks and Tom Sully in Sully, this might have the potential to be one of his best yet.

It's going to be a new perspective of Mr. Rogers.

Fred Rogers passed away in 2003 at the age of 75. He would have turned 93 on March 20, so this wonderful news could not have come at a better time.

Coincidentally, Colin Hanks, Tom's eldest son, plays Mr. Rogers in this buzzed retelling of Mr. Rogers life on the Comedy Central special series Drunk History. Watch this to brush up on the life of Mr. Rogers while you anxiously await for this new movie to come out.