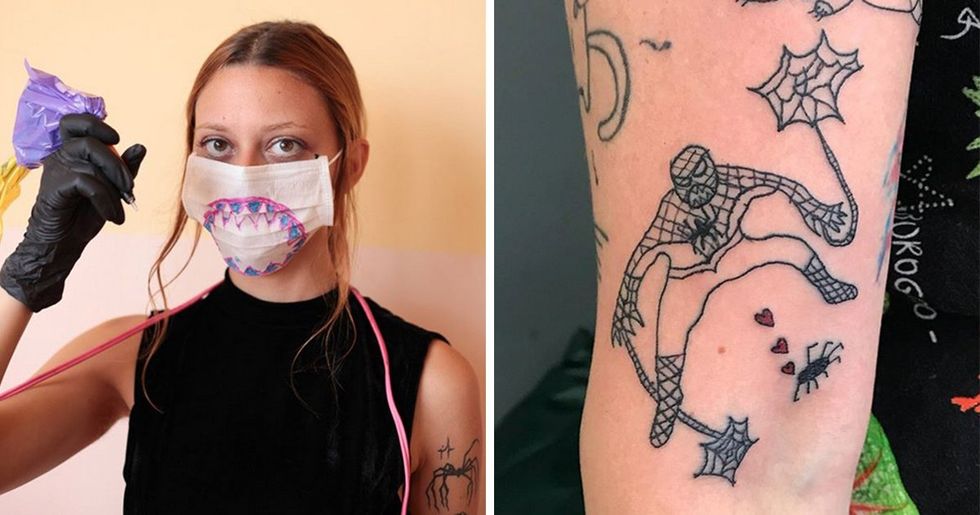 Generally, when people get tattoos on their body, tattoos that will be there forever, they want something beautiful, meaningful, and in all other ways attractive. Not so for the customers of Helena Fernandes! This Brazilian tattoo artist has created her own niche in the tattoo world. She can't draw. Her artistic skills are not what you would call conventionally...good. But she has owned the idea of the "ugly tattoo," and that has people lining up around the block.

Her drawings are crude and odd and weird but in the best way possible. Seriously, they fall into that "so bad they're good" category that is very hard to achieve. She tackles all sorts of subjects in her work, from animals to superheroes to strange monster creatures, but they all have one thing in common: They are all uniquely Helena. Not gonna lie; after looking at her Instagram account, I kind of want one of these silly little tattoos!

She's not the most classically talented artist in the world, but boy does she have a voice and a unique way of drawing.

I'm already in love. This little weird cat is super charming and silly. I just can't get over all the details on this cat...if you know what I'm saying.

Sure, it looks like something I drew when I was eight years old, but it's adorable and I love it. Even though the unicorn looks shocked.

I think this is supposed to be Daffy Duck, but he has a mouth full of sharp teeth and that's terrifying!

I think that'ss a saw, a pair of shears, a hammer, and a drill we're looking at. I'm too distracted by their cute little smiles! The next one takes cuteness to a whole new level...

A piggy, a goat, a rabbit, and a bear! How cute! This one is actually good. I think Helena has more artistic ability than people think.

At least I think that's supposed to be a penguin. Maybe he's mad because it's way too cold outside!

Sure, it looks like a four-year-old drew it, but that doesn't mean this yellow monster isn't super scary. Coming up, Helena attempts to draw people.

Um, is that supposed to be Bruce Lee on the right? I have no idea what's going on here, but, perhaps surprisingly, I'm on board.

This tiny cat has little bird feet. Wait, now I'm thinking that maybe this is just a bird. I have no idea what it is, but that doesn't change the fact that I love it.

This little paperclip looks just like Clippy from Microsoft Word, but like, a pervy version. What is he looking at?

This seems like a tattoo that someone would have gotten in 1996 when the Internet just became a thing. Be honest: Is this Al Gore's arm?

I don't actually know if this is supposed to be a cat with a cleaver on its tail, but if not, tell me, what do you think it is? Next, we explore more of the animal kingdom!

This may be the most unintimidating looking shark I have ever seen. He looks more scared of us than we are of him.

OK, this is actually really great and seems like it was hard to do. The head-on angle is not easy to accomplish!

These spaceships also have little birdie feet! That seems to be a favorite detail of Helena's. And you know what? It works.

This looks like one of those Fisher Price plastic play castles that you had in your backyard when you were little.

This little devil in a hole is equal parts scary and cute, and I don't know what to think. I want to hug it, but I also want to hide from it. Just wait! The alligator's my favorite.

This looks like a tattoo that would look really majestic from far away, and not until you got up close would you realize that something was off.

It's a bird! It's a girl! It's a weird little tattoo that could 100 percent be a character on a Cartoon Network show.

This cat is totally great and proportional until you get to the head. Then it's just a free-for-all.

I think this is supposed to be an evil, angry version of Charmander the Pokemon. He looks like he's yelling about Trump.

Cow = cute Pig = cute Chicken = Something happened to this chicken. The next one is new levels of confusing...

Is it a dog? A sheep? All I know is that it has six legs and a long tongue and maybe a bug on its head?

This sentient espresso maker pretty much expresses how many people feel before they've had their coffee in the morning.

I don't really get what's going on here, but I will say that if you put ketchup anywhere near a slice of pizza, you should go to jail.

What a cute little giant predatory reptile! Share this with someone who'd appreciate these "ugly tattoos"!