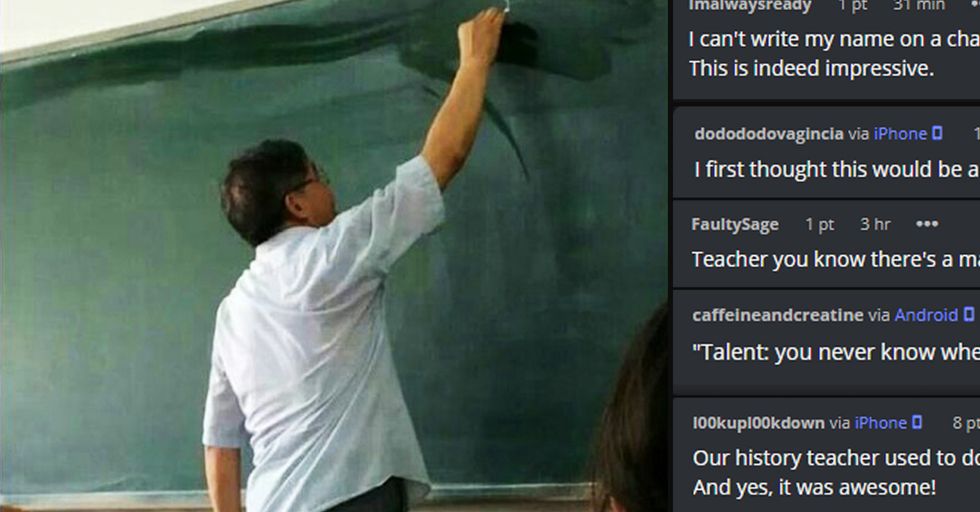 This Teacher Has an Unexpected Talent, but Not Everyone's Impressed

Year after year when back-to-school season rolls around, parents and students get sucked right back into that late-summer panic vortex of shopping for school supplies, locating non-flip-flop shoes that still fit, and retraining our bodies to wake up before lunchtime.

It's easy to forget, amid all the last-minute runs to Target for more glue sticks, that there's a ton of pressure on teachers, too.

They have the daunting task of not only teaching kids everything from basic reading skills to the Magna Carta, but they have to actually hold their students' attention while they're doing it so the kids, you know, remember some of that stuff.

Most of us couldn't name all the state capitals, let alone find half the countries on a globe, but then again most of us didn't have a teacher like this guy.

Posted by imgur user AdanEvin, an unnamed teacher is shown getting his teach on in a series of photos. At first we see him in a familiar teacher stance, with his back to the classroom while he starts to write on the chalkboard. Nothing remarkable there.

But what is he drawing?

At this point it looks a little like some classroom prankster sprayed Silly String all over the board. If that's the case, this teacher is being way more chill about it than any teacher we've ever had.

By the third photo you can start to make out what he's working on.

Can you see it? It's still pretty squiggly, but one of those squiggle blobs looks suspiciously like Australia...

It's clear this teacher did not come to play.

He is making full use of every inch of that chalkboard, getting all the way up on his tippy toes to reach the top. Hey, make room for the man, there's clearly some genius coming through and he needs some space for it.

And just like that, this teacher doodled the whole Eastern Hemisphere. But he still has some work ahead of him...

I see London, I see France...and I also see the Americas over there! Just a few finishing touches...

Let's not forget to draw the edges of the Earth.

We don't want to fall off now, do we?

There it is — an incredibly detailed, hand drawn world map. Done on the spot, during class, without using a cheat sheet or anything. The photos were trending on the site within hours of being posted, and it's pretty easy to see why.

Most folks on Imgur were duly impressed.

True, a drawing like this is quite a feat under any circumstances, but doing it in chalk on a vertical surface definitely ups the difficulty level.

Aside from being an artistic achievement, though, this map has major academic merits.

Lots of schools have taken to combining art with other subjects, including biology, geography, and even math. The technique is especially helpful for visual learners, and drawing things like maps or biological structures can help your memory retain information in ways that lectures or slide presentations often can't. Of course, not everyone was equally awed by his talents.

There were some complaints about accuracy.

Okay, so maybe Africa looks a little on the wide side. But he's drawing it freehand... by memory, people.

Maybe we should adjust our standards a little?

I'll give you that, but TBH we all snickered about the shape of Florida at some point or another in the fifth grade, so the east coast of the US was already considered mildly comical anyway.

Then there was this guy, who was disappointed for an entirely different reason.

We'll grant you that, Westeros would've been pretty cool. But this is the actual world, so, you know, also cool.

For anyone who wants to crack on this teacher for "showing off" during valuable class time, several people who'd had similar classroom experiences took up his defense.

Plus, plenty of people pointed out that, chances are, this teacher could talk and draw at the same time. So, he's still teaching.

In fact, one person claimed that the skill is actually pretty widely used in China.

We have no idea if that's true, but it sure sounds about right, which makes us feel both respect for China's school system but also relief that we didn't go to college there. However, as much as we enjoyed reading the props everyone was giving this prof, what we really enjoyed were what the Internet's sort of known for...

While we were busy +1-ing this user for the Magellan reference, someone was already right there with a reply.

User nygen imagines the teacher had this quick response:

Oh man, if that doesn't give you flashbacks to middle school, nothing will. We broke into a cold sweat just reading that.

Oh well, according to this guy it doesn't even matter anyway.

Oops! We weren't the only ones wishing it was a video so we could see the map unfold in real time, but it probably didn't last two hours past the bell! We hope.

Of course there was one way he could have saved a bunch of time...

Oh yeah, that thing! The map they already have in almost every classroom across the globe (as far as we know).

Yet even the roll down map wouldn't have helped the countless people who commented stuff like this.

LOL, let the flat-Earthers have their moment, I guess. With the photo series caption, "Talent: You never know where you will find a true artist" you know the sarcasm is all in good fun. Major props to this teacher, and to any teacher who comes up with such cool, creative ways to get kids' attention and make their lessons memorable. It's because of people like you that there are students who grow up to do great things. Like make the Internet laugh with a well-timed Magellan joke.
20%