A teacher at Fox Chapel Middle School in Hernando County, Florida, has been fired after handing out that very assignment, one parents found completely inappropriate. | 22 Words 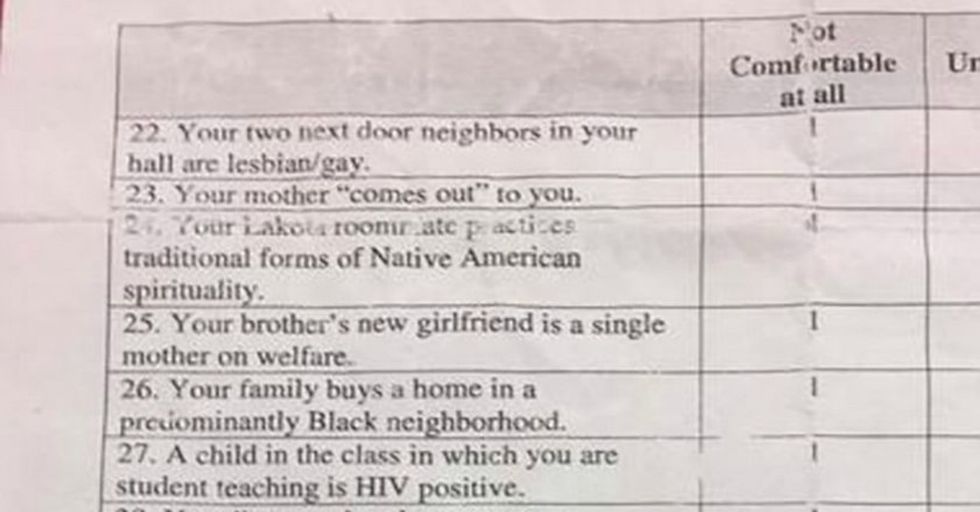 This Teacher Was Fired Over Homework That Asked Inappropriate Questions

There are certain topics that middle school kids are exposed to whether through friends, the Internet, or media that could be considered a little controversial. That's to say, they're not stupid and they're aware of things related to race and sex, for example.

But if you're a middle school teacher, it's probably not the best idea to create a forty-one question homework assignment titled, "How Comfortable Are You?" that asks them that very question about things like being "invited to a gay bar," and "sitting next to an Arab man on a plane."

A teacher at Fox Chapel Middle School in Hernando County, Florida, has been fired after handing out that very assignment, one parents found completely inappropriate.

Sixth grade students were asked to respond to the hypothetical situations on a scale of one to four — with one being "not comfortable at all" and four "completely comfortable." Because it's a little difficult to read, I'll just tell you some of those sample questions include: "The woman sitting next to you on the plane weighs 250 lbs." "Your mother 'comes out' to you." "Your new roommate is Palestinian and Muslim." "A group of young Black men are walking towards you on the street."

Tori Drews, one of the students that also received the paper, said that she was given it during her 7th period Leader In Me class, in which the students learn about accepting other people's differences.

"There were children that were saying this is wrong. Why are we doing this? Does this have a reason? She was going yeah this is kind of wrong...maybe I should take it back," Drews said. She said the teacher, who was let go, handed out the assignment to the class. "Kids were asking if they could share it with their parents. She was like no. Don't show your mom. Don't take that home. I'm taking it back up," Drews said. District officials said that the teacher had joined the school in January, and was still under probation when she was fired for handing out the assignment. In a statement they said "in no way, does that assignment meet the standards of appropriate instructional material." What do you think? Was it out of line?