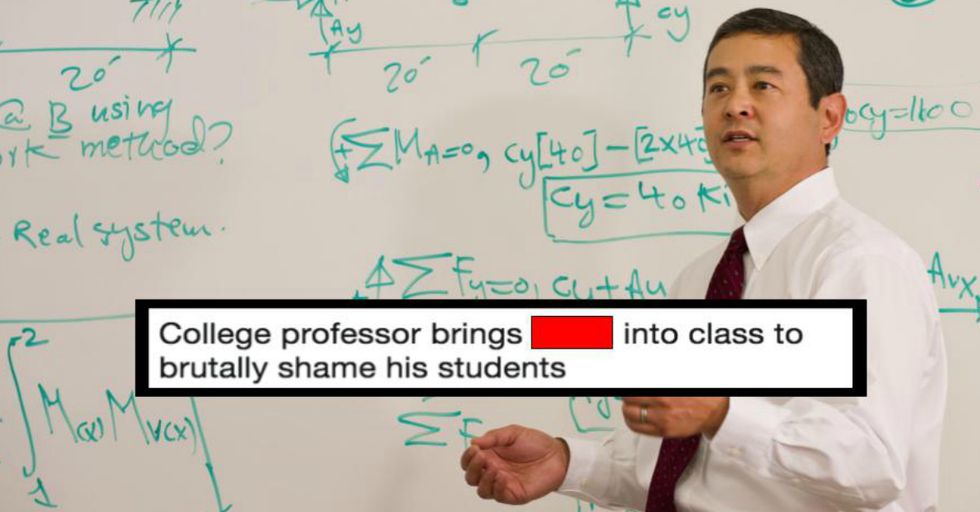 Teachers are among society's most unsung heroes. It takes years of work to earn a teaching degree, and even when you get there, the pay is often less than stellar. But most teachers do what they do because they love working with young people, which ultimately helps shape the future.

Even if that means bypassing a few roadblocks on the way.

One teacher recently showed that his sense of humor was fully intact even when he had a big point to make about his students' abysmal test scores. He could've ranted and raved about their disappointing academic performance, but instead, he decided to show how he felt through an over-the-top visual gag.

It takes a brave an committed soul to actively spend years getting certified in a field that's often thankless. But teachers are the kind of people who not only accept long hours and small paychecks, but also absolutely love what they do. It's a pretty selfless job.

Which is a good thing, because all of us need that guiding light in our lives.

Most people can look back and remember a teacher who inspired them. Whether it was in math, reading, art, or music class, chances are there was a man or woman who made learning fun and encouraged you to follow your dreams and pursue your strengths. If you look back and smile at a memory of a specific teacher, they probably did their job, nudging you toward a positive life path.

Not all that "nudging" looks the same though.

While it's true that the vast majority of teachers want to see all their students succeed, each teacher has his or her own way of going about that particular mission. There's no one-size-fits-all solution to helping a young minds live up to their potential. Teachers have to develop their own style of encouragement.

Some teachers like to walk on the stricter side.

Years of experience have convinced some teachers that being demanding and holding students to exceptional standards is the way to go. It gets results, and if they can simply impart the lessons of diligence, hard work, and perseverance, they've done their job. They're not necessarily there to be your friend, but, come hell or high water, they'll make sure you do your best.

Other teachers take the soft-spoken route.

These instructors not only want to mentors, but also friends to their students as well. They want you to learn, but they're also ready to listen to problems, encourage open discussion, and possibly entertain that long-winded explanation about why you couldn't finish the final term paper on time. Occasionally, their goodwill gets taken advantage of, but it's hard not to have a soft spot for these types of teachers.

But, sometimes, it doesn't matter how hard a teacher tries.

No matter the style, some days, the class isn't going to meet expectations. This is disappointing for everyone involved, but for the person who's spent hours upon hours trying to effectively convey new information, it can be especially discouraging. When a class collectively fails a test, it means rehashing old information and, essentially, taking two steps back in the learning process. Frustrating for students. Mind-numbing for teachers.

Every teacher has their own way of dealing with a class bombing a test — but one professor recently blew all the others out of the water.

When an entire class fails a test, the teacher has to do something about it. Some would've given out more homework. Others would've given a stern lecture on the importance of paying attention. This hilarious man found a very memorable way to let it be known that the class had basically killed him and his optimism, all at the same time.

His extreme message caught the attention of social media right away.

After a Twitter user and student @elmariochido posted the picture of his professor hanging out in a coffin, the rest of the internet had questions to spare. After all, it's not every day you show up to class and see that you've done your teacher in, literally, just through poor test scores. The first questions on the table: How'd this teacher obtain an empty coffin? And how'd he get it into the classroom?

Others were quick to speculate.

Twitter users are nothing if not helpful in the area of "random useful facts you never knew." And this thread did not disappoint. A few followers chimed in with how one would go about renting a coffin, but then user @castielcampbell volunteered a fact that seemed to take everyone by surprise. He also later added that coffins can only be purchased through Walmart.com, and not in the brick-and-mortar stores. Because that would just be weird. Right.

The over-the-top stunt had unexpected results.

@MargotJSolal @elmariochido That man is my hero - and he has totally shamed me. From now on, I shall try that much… https://t.co/eqTRXLrVr4
— William Scheckel (@William Scheckel)1509836515.0

Most followers of the thread were busy trying to figure out the coffin logistics, but another commenter took the professor's lesson to heart. From the looks of it, this educator may have been so inspired by the viral teacher's morbid statement that he vowed to outdo him in the future. Will there be a rash of teachers hanging out in empty caskets? Only time will tell.

Everyone is pretty much in agreement here.

One glance at the extensive Twitter thread, and there's no doubt that everyone agrees that this professor is a legend. It still doesn't answer the question of exactly how bad the student's test scores were —inquiring minds on the internet still want to know. But one thing's for sure: this lesson is one no student in that class will ever forget. And we won't either.