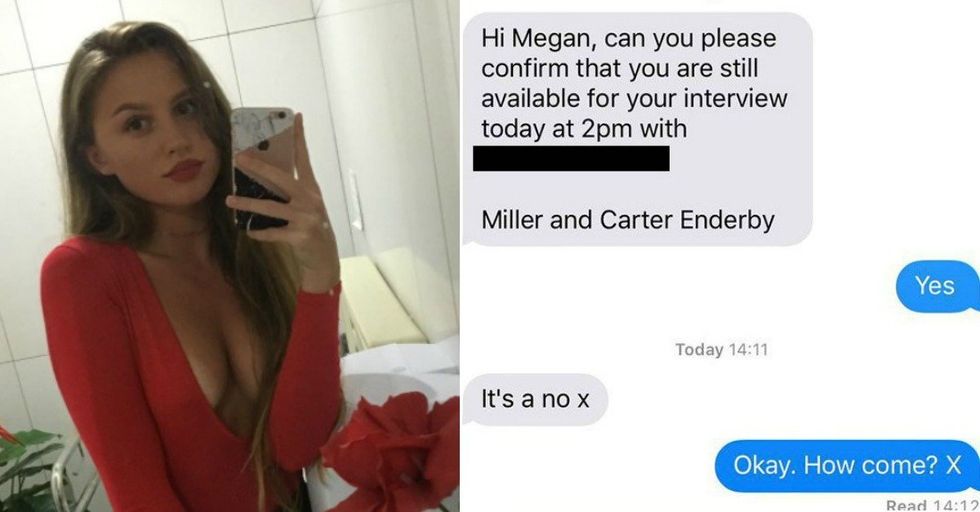 It's never fun to get rejected from a job you were interviewing for, but most companies try and keep it classy and let you know in a respectful manner — I said most companies, but apparently not all of them.

Dixon went for a job interview at a restaurant called Miller and Carter.

Almost immediately afterward, she received a horrible rejection message from the branch’s assistant manager, Shantel Wesson, who should probably be in a different line of work.

Dixon followed up her original tweet with this, adding insult to injury.

The tweet quickly went viral, with people ticked off on Dixon's behalf — and because the woman couldn't even use proper grammar.

The restaurant responded to say a big ol' "oops."

"We can't apologize enough to Megan," a spokesperson for Miller and Carter told The Sun. The statement went on...

"It was never our intention to be disrespectful or upset her in any way. The texts were sent in error and were intended for our manager, not the candidate."

Yeah, but even if it wasn't their intention to be disrespectful or upset, they totally were and they totally did! Your intention doesn't really matter in this case, does it?

Then they say that that's how they talk about possible staff among themselves, so if we're being honest, she's much better off somewhere else.

Seems like she dodged a real bullet. That seems like a terrible place to work and frankly terrible people to work for!
We recommend that Megan Dixon say, "Bye Felicia!" to Miller and Carter forever. She's young and capable and there will be plenty of better opportunities in the future.