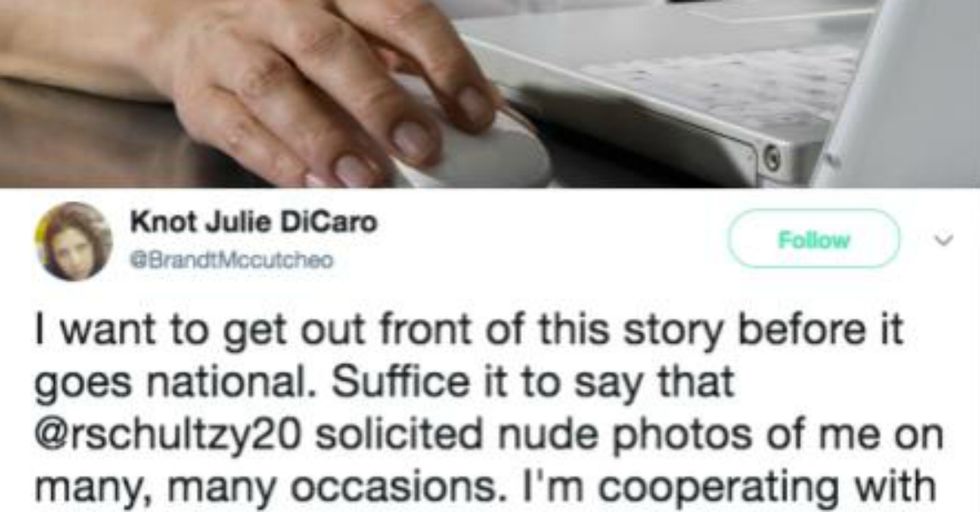 Thanks to MTV, we all know what catfishing is: when someone tricks people on the internet into thinking someone they are not. If you've watched the MTV show Catfish, you may think they have seen the weirdest, most bizarre catfishing stories that exist. Well, buckle up because the catfish story you’re about to read rivals 90s teen movie Never Been Kissed for most outrageous example of someone pretending to be someone they just completely aren’t.

Ryan Schultz is a sportswriter who writes about the Chicago White Sox for several online publications.

Or at least until a few days ago, that’s what everyone thought. In the article published on Baseball Prospectus, SB Nation, and RO Baseball and on his Twitter account, he claimed to be Ryan Schultz, a married father of two. But actually, Ryan is not married or a father. Actually, he’s not even named Ryan. Or a man. In fact, the writer Ryan Schultz is a 20 year old woman named Becca Schultz. Becca has been writing articles, interacting with people online, and tweeting as Ryan for the last eight years. Since she was 13 years old.

A few days ago, a woman named Erin who had previously interacted with Ryan tweeted a shocking series of screenshots:

I love the show catfish but I never thought I would end up being Catfished myself. Here is some news about Ryan Sch… https://t.co/uP99A2NhJ5
— Channing Tweetum (@Channing Tweetum)1510187247.0

In the screenshots she revealed that the writer who had been publishing under the name Ryan Schultz was actually Becca. And what’s more, Ryan Schultz had been harassing multiple women online for years. He made misogynistic jokes, berated women, and in some cases demanded women send him nudes and threatened to hurt himself if they didn't. All this time, everyone still thought he was Ryan and not Becca.

When some of the women came forward with their stories of his harassment, Ryan was fired from the publications he wrote for.

But something seemed off. The women noticed that Ryan never appeared in any photos with his wife or children. They also discovered that while Ryan claimed to be working on a degree in pharmacology the school he claimed to attend did not have a pharmacology school. They confronted Ryan and the truth came out: he was really 20 year old Becca.

Lots of people who interacted with Ryan were surprised by his real identity.

I’m absolutely dumbfounded right now. I interacted with the rschultzy20 account all the damn time. The internet is wild as hell.
— Jeff (@Jeff)1510206377.0

Twitter users who had read his articles and spoken with him over the internet expressed shock over the revelation that Ryan was not, in fact, Ryan at all.

Becca wanted to be a sportswriter, but didn’t think anyone would take her seriously if she was a young woman.

When confronted by the women she’d harassed, Becca admitted that she didn’t think as a woman she’d be able to make it as a sportswriter. So she assumed the identity of the older, male Ryan, sadly not an uncommon move for women who are worried they won’t be taken seriously as a writer.

But Becca got in too deep...

After Becca started getting published as Ryan, she felt she had to keep up appearances. She had gained a following on Twitter and people were reading Ryan’s articles. She used a photo of a high school classmate to pose as Ryan and photos of his niece and nephew to use as her children. She was living a double life. She even appeared on a podcast as Ryan. She didn’t know how to get out of the lie she’d created.

Harassment did not have to be part of Ryan’s persona to write about baseball.

According to an interview with Deadspin, Becca said of Ryan’s persona:

I was young and had no idea what to do, so I just acted like I thought a man would do. That slowly led me down a path to some things that I was very uncomfortable doing but didn’t even realize were happening.

Unfortunately what was happening was that Becca had begun harassing women she met online as Ryan. According to the same Deadspin article Becca said,

Ryan’s Twitter account has since be deactivated, but Becca did activate it again long enough to tweet an apology to the people she hurt. Unfortunately, while it is a totally bizarre story, what Becca did hurt a lot of women, whether was acting as Ryan or herself.