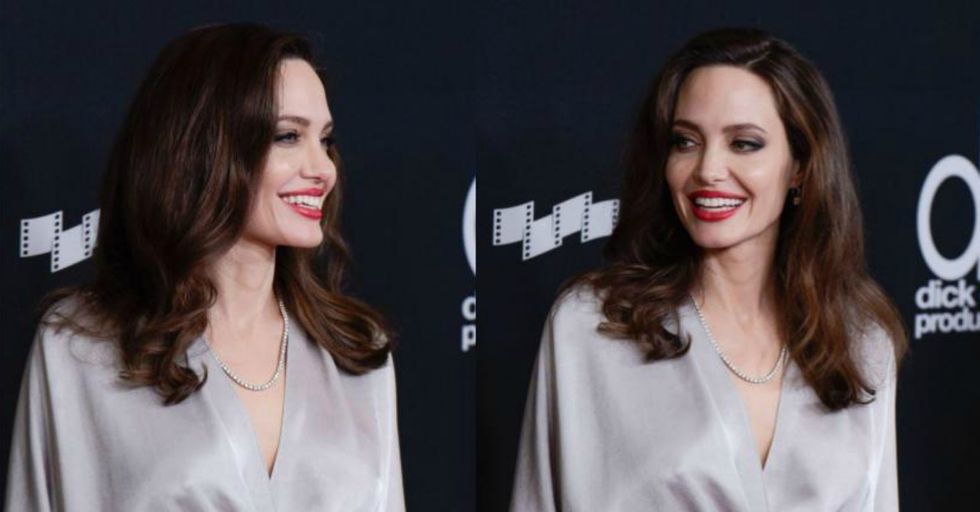 43-year-old Angelina Jolie, the actress that brought Disney's Malificent to life and gave cheekbones and heaving bosom to Lara Croft of Tomb Raider is regarded by many publications – Vogue, People, Esquire, FHM, and Vanity Fair – to name a few, as either the most beautiful woman alive, or the world's sexiest.

Of course, there are other contenders from around the globe – India's Aishwarya Rai comes to mind – but, for the most part, countries of European extraction tend to view Jolie as the epitome of all that is feminine beauty.

In an interview with Esquire, Jolie acknowledged that this was in part because she had a reputation for being “kind of wild or bad or weird or crazy."

Jolie is famously obsessed with blood. She and her ex husband Billy Bob Thornton wore vials of each other's blood and even signed their wills in blood in 2001.

But then, Jolie has struggled with depression since she was a teen (not that depression and a fascination with blood go hand in hand, fyi).

"The tattoos, the blood, cutting myself — it’s all very much who I am," she said to Esquire. "If you knew me privately, you might think I was even wilder than my reputation. But I’m also much softer. I’m a soft woman. Softer than people think."

In fact, Jolie didn't always want to be an actress. Once upon a time, she actually wanted to be an undertaker!

“It sounds like this very strange, eccentric, dark thing to do but in fact I lost my grandfather and was very upset with his funeral," Jolie said in an interview. She was upset with the way it was conducted, so, “If this whole acting thing didn't work out that [funeral director] was going to be my path."

Jolie once even dropped out of acting school to pursue undertaking.

After two years at the Lee Strasberg Theatre Institute, Jolie left to study the mortuary sciences (at least we think that's what they're called). She even studied embalming!

We say all this to say that Angelina Jolie has had a long history of being both sexy and goth.

It is her slightly dangerous allure that has made her such a consistent figure of lust and envy for decades. It's also this allure that has made women across the world want to be like her. Angelina Jolie lips and breasts are in constant demand from plastic surgeons, as are her ever distinctive cheekbones. One teenager, however, took her fascination with Angelina Jolie to an entire other level. And you'll have to see the results for yourself...

19-year-old Sahar Tabar of Tehran, Iran, is on a mission to turn herself into Angelina Jolie.

The teen wants so desperately to resemble her idol, she has reportedly done over 50 surgeries to look like the Mr. and Mrs. Smith actress.

She had brown hair and brown eyes, regular weight. She seemed completely normal...

But then, Saha decided to transform herself into Jolie.

She is a fan of contacts and wears icy blue to resemble the actress's sultry blue-green gaze. She also seems to have manipulated her nose – both through surgery and aggressive app filters.

While Tabar may think she looks like Angelina Jolie, people on social media haven't been so kind to her celebrity transformation.

The teenager has over 451,000 followers on Instagram, and some of their comments have been ruthless. One widely-cited comment was quite stinging.

Her: Doc, make me look like an 8 month old corpse.

It is important to note that most of Tabar's photos appear to have been manipulated with Photoshop, as well as some sort of filter, so the images are very much distorted. No matter what people think of Tabar's photos, we hope she's happy and healthy and comfortable in her body.