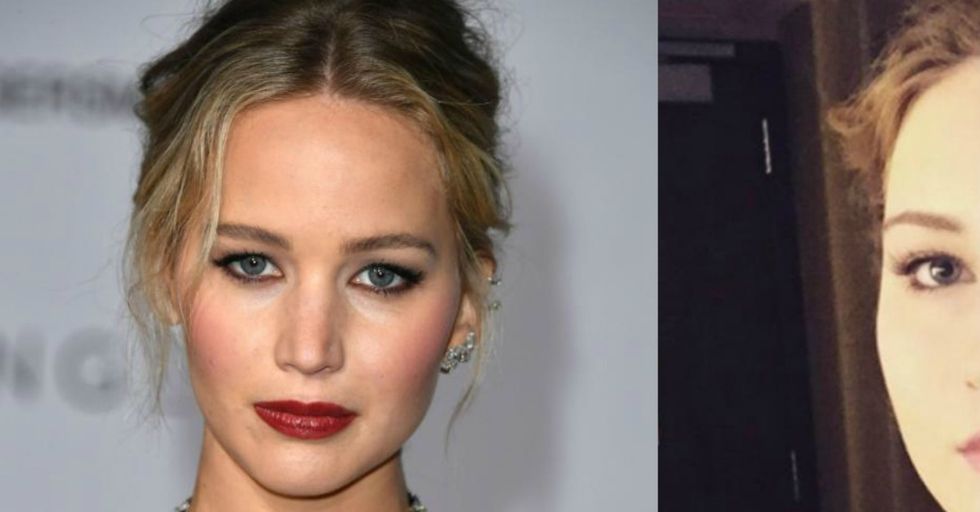 From the moment Jennifer Lawrence burst into the spotlight with her award-winning turn in the indie film Winter's Bone, she captured our collective attention. From her slanted blue eyes and plump cheeks to her signature svelte figure, Lawrence is extremely distinct from the host of other blonde-haired, blue-eyed actresses that slog around Hollywood.

She then went on to win the award two years later at the age of 22, making her the second youngest person to do so. The point is Lawrence is beyond amazing.

Maier goes to school and models, does all the things ordinary teenage girls with exceptionally pretty faces do. But one thing separates her from her classmates... people keep coming up and asking her for autographs because they think she's Jennifer Lawrence.

In an interview with the Daily Mail Maier says she discounted the comments at first.

"At first I thought it was a joke when people started saying I looked like Jennifer Lawrence," Maier says. In fact, she didn't really see the resemblance.

But then, it wasn't a big deal in her hometown growing up.

Maier lives in Ponte Vedra, a tony beachside community that lies within St. Johns county, the wealthiest country in Florida, and she says, "In my hometown, people know they're not going to see a real celebrity, so I've been told I look like her, but never confused [with her]."

It's completely different, however, whenever she visits New York, as girls who model often do.

People often rush up to her asking for autographs. "I think one of my favourite examples is when a woman said 'Jennifer, I'm your biggest fan!" Maier says.

Of course, Maier immediately informed the woman she wasn't the Hunger Games actress.

The woman wasn't dissuaded. "Are you sure?" she asked.

Maier acknowledges that her resemblance to the actress has affected her life in "strange ways."

"I got a lot of attention in the first couple years of high school because of my similarities to her," Maier says. "I was also subjected to a lot of online attention when I was pretty young, good and bad, but both have managed to help shape me as a person."

We're definitely hoping the good outweighs the bad, but one thing is for sure – Maier is not a fan of Jennifer Lawrence.

"I know this is not the answer people are expecting from me, but I am not a fan." Say what?

So what do you think, does she look like Lawrence?

We think she looks like a dead ringer. Just goes to show, there really is a doppelgänger for everyone.