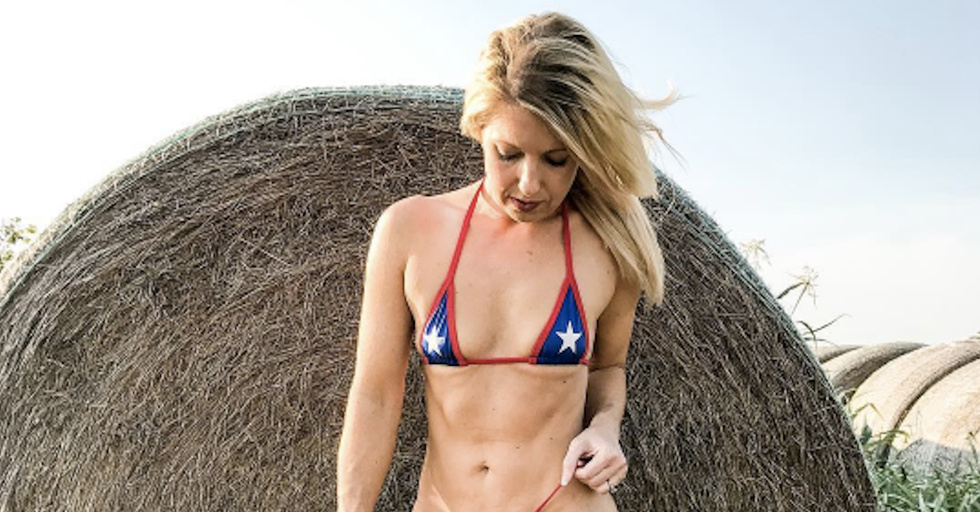 This mother of two blew off her haters and has turned her love of her body into an Instagram sensation. And now, she's cashing in on her new found fame.

In less than a year, Texas mother Courtney Ann has gained almost 400,000 Instagram followers by posting photos of her butt.

Her account @texasthighs started as a dare with her husband who admires his wife's commitment to fitness despite her busy life.

And it's just exploded from there.

"My husband is always taking pictures of me and saying, ‘You’re so hot,’" she told the Dallas Observer. “As I've gotten older, I've tried to stay in shape, but with kids and everything, it's kind of crazy."

But as her online following grew, some family and friends were less than supportive.

They even went as far as to flag her posts, getting her account temporarily suspended. Though she doesn't give out her last name, Courtney Ann has definitely faced backlash.

"I try to keep everything on my page about being happy or positive or grateful or chasing goals, whether it's physical or mental," she said.

"So it was interesting when I did start getting a lot of, ‘You're a mom; you’re too old to be doing this.’" Because as we all know, once you have a baby, you're assigned a mandatory mom haircut and all your credit cards get replaced with Coldwater Creek coupons.

Courtney has always seen the account as a way to celebrate how hard she works for her body.

And as she tells the paper, even her own kids, ages 9 and 12, have an opinion about what their mom posts...

“To them, it's kind of everywhere anyway, so they just kind of see it as, ‘Mom looks pretty.’ And they know how hard I work out."

That's super supportive considering that when I was their age, all I had to say to my parents were things like, "Get out of my room!"

Though she deals with plenty of criticism online and off, she's expanded her Instagram account into a small business.

She offers exclusive content to members for $10 a month, but calm down, it's nothing more salacious than her public posts.

This bonus content plus t-shirt sales means Courtney's butt is cashing in.

Meanwhile, mine is making me buy new jeans every three months. (But if it gets big enough, maybe one day my butt can have its own Instagram account, too.)

His wife's fans don't make him jealous at all since he says that she gets plenty of attention offline too. Not surprising!

"If we go to a family event, if we go to a bar, if we go places, it's less protected than it is on the internet," he told the Observer.

I mean, just look some of the awesome things he says about his wife in the caption to this picture. He's clearly very proud of her and her journey! He even has an Instagram account of his own...

His Instagram bio reads, "Amateur photographer and DJ for Texas Thighs. Blessed husband of Texas Thighs. Yes I am as lucky as any man can be."

At least he knows how lucky he is. This is one supportive family!

Courtney Ann is a positive figure for peachy women everywhere!

The message is clear: You got it? Flaunt it.