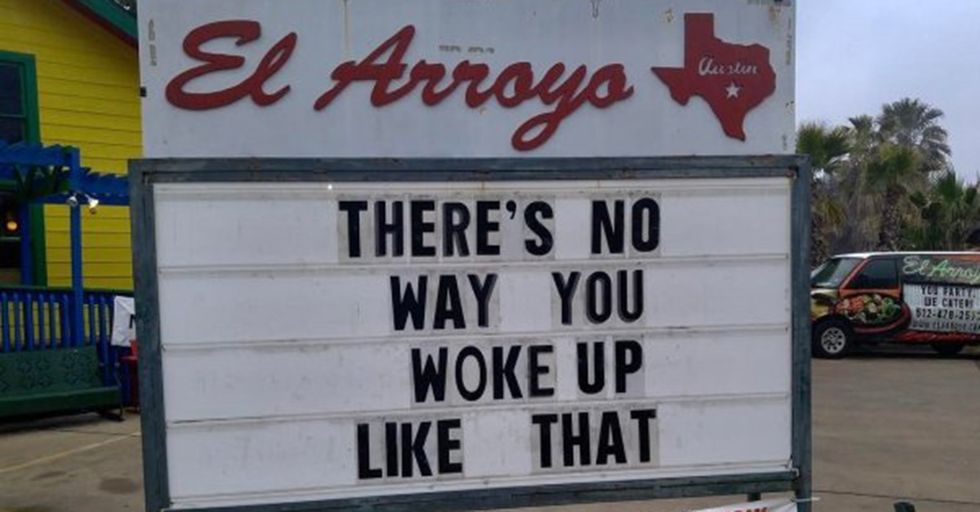 This Texas Restaurant Has Become Legendary For Its Consistently Hilarious Signs

Normally, restaurants are known for their food or service, but a Mexican restaurant in Austin has found fame a different way...

...with its hilarious and iconic sign out front. Think of it as a "shower thoughts" billboard that changes on a regular basis. The sign has become Internet-famous and made El Arroyo a must-see destination for tourists. If you're in Austin, check it out. The food's great and the margaritas are...large.

As you can see, the sign doesn't really have a genre. It will make some random observation or even help you with your love life.

The messages can get a little...abstract.

But that's just part of the charm. El Arroyo's doing its part to "Keep Austin Weird."

We may never know the answer.

But at least we'll have the question in the back of our minds.

I"m not sure what a "parked car conversation" is.

Is that a convo that's important and deep enough that you stay seated in your car even after you've reached your destination? Because if so...yeah, true enough.

Let's be friends forever. We can love each other's insecurities. No judgments.

Also, if you just woke up, then who's taking the well-lit picture of you? Sounds staged...

Start my own family? CHECK!

According to the serving sizes on these boxes, you're achieving your life goals faster than you planned. Nice work!

I wonder if there's just one Yoda-like wise person making the signs, or if they're done by committee. Either way, the output is impressive.

Ok. This one might be a little weak. Maybe they found this pun on a gum wrapper or popsicle stick.

You honestly didn't miss much with the first 181 iterations of the band. They really hit their stride at 182.

Cargo shorts got your back.

No more time spent fumbling with your belongings. You just focus on charming other people. Your stuff will be safe and secure. Trust me.

...a cup cup cup? When does it stop? This could get really out of hand quick.

...to the couch. It's really coming along nicely.

I think this one's easy enough to get without explanation.

Kale takes a lot of heat these days, but I wouldn't expect a Tex-Mex restaurant to be lovin' it.

Maybe the owners could start an animal psychology lab to get some of these answers for us. I mean, they're the ones asking the questions.

The nice thing about a Caeser is that every time you order it, it feels like a little betrayal. It's fun.

It might not be relevant to much, but at the very least, this wordplay will look good on your Instagram feed.

Think about it. El Arroyo: serving up Mexican food and deep thoughts to Austin residents and tourists for decades.