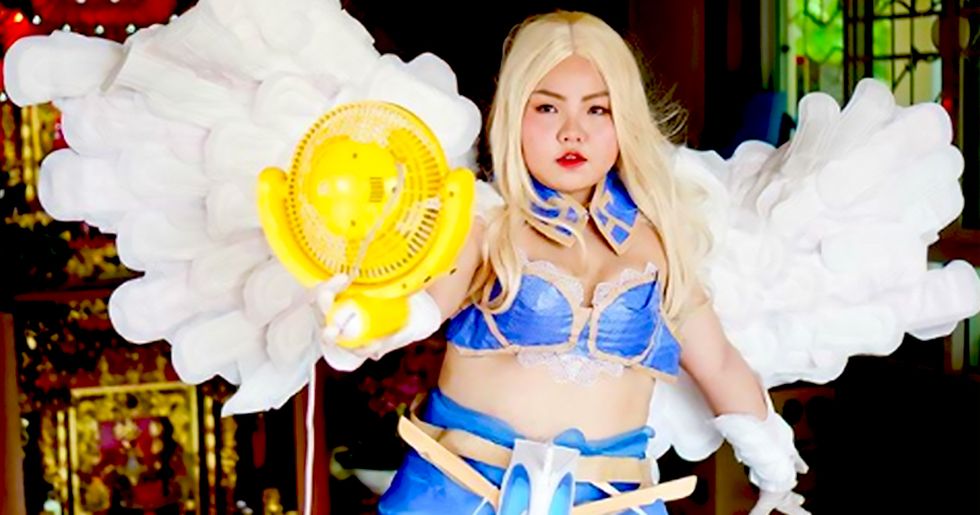 Mastering the art of cosplay and costume design is something that most people only dream of. But Benjaphorn "Sine" Chetsadakan knows exactly what she's doing. The young Thai woman has gained a huge Instagram following for her unique take on cosplay.

That's because Sine uses a special kind of material for her costumes: food. She's a pro at crafting on a budget, and making a complex look from foodstuffs! If you know much about cosplay, you know that it can be super expensive depending on the materials used. So Sine launched a parody career using food, with surprisingly stunning results!

Check out just how Sine does it, plus some of the amazing looks she's recreated along the way!

She's made a name for herself on the internet, by creating her own interpretations of famous costumes out of food!

She's been at it for a long time.

Looks like her love of costumes and design set in at an early age!

This dress got a ton of attention.

And it's made from bags of prawn crackers! The original dress was Thai actress Araya “Chompoo" Hargate’s red carpet look from the Cannes Film Festival, and Sine's version was what first caught everyone's eye.

22-year-old Sine's parody cosplay career began as a means of promoting her own plus-size clothing shop, and it's taken off!

Sine has talked about the inspiration behind her work.

“Originally, I wanted to be an inspiration for plus-size women. I wanted to show that even I could put together an outfit and look beautiful. So in the beginning, the looks that I created were everyday wear, and it escalated from that," she told Coconuts Bangkok.

Everyone always marveled at Merida's curly red hair...turns out, it's not that hard to replicate.

Her costumes always go to good use, too.

“I love to eat, so I thought that food should be part of my costumes," Sine told Bored Panda. “I have a lot of fun making every costume, and me and my relatives eat them afterward."

Sine's dream is to walk a red carpet in her cosplay.

“One of my dreams is to walk the red carpet like Chompoo. It doesn’t have to be a global red carpet… any award show in Thailand would do, and I’d show up in my cosplay outfit!" she said.

Sine's definitely got that "Look what you made me do" vibe going on!

“I never dreamed that I’d be working abroad. I’m just a regular girl who doesn’t even speak English, and now I have to talk business with foreigners? I feel the need to improve myself even further, and I’m studying English," she said.

She knows the way.

Look at Sine's adorable outfit from Moana! And we're loving her substitute for Moana's pets.

Sine has a good method for inspiration.

Coming up with new and interesting Instagram posts can take a lot of thought, after all. Sine talked about how she does it: “I think that when you run out of ideas, you can’t stay in the same place. Go out. Find a place to relax. For me, I just go to a fresh market and find something to eat."

She made an actual meat dress!

Honestly, I think that makes her look even more hardcore than Rihanna's.

And of course, there's a 'Wonder Woman' cosplay.

Complete with makeshift crown and what looks like broom bristles for the chest piece!

The sheer amount of girl power in this post is just awesome!

Heck, she can even pull off ice cream!

She's got the sprinkles, the cone-like pattern on her hat, and everything!

This look is from a Thai online game.

Yes, those are sanitary napkins making up the wings. And you know what? Those make pretty effective wings!

In fact, there's more than one way to make a wing.

Could use pads...could use Nescafe Blend packets. The options are endless!

It's Ariel, from 'The Little Mermaid'!

See, you don't have to order an expensive wig or dye your hair. There are a million ways to fix every problem.

Because Sine put together her own rendition of Hela, from Thor: Ragnarok!

Oh, and that's not her only Ragnarok look.

Also: above, we have Chris Hemsworth. Below, we have a cute sandy-haired pup. I see no difference, tbh. They've both got a lot of on-camera charisma.

When your fake six-pack is a six-pack...

...of dinner rolls! Some people just wouldn't bother, but I enjoy the attention to detail.

Luke, I AM YOUR FATHER.

See, you can many anything look sleek and shiny.

And here we have another interesting example of wing-like appendages!

They both look so elegant that you hardly notice the food.

Here's a re-creation of a costume from Buphaphonniwat, a popular TV show.

Gotta have a girl group look!

This one is from the Japanese girl group AKB48's "Sonichi" music video.

Because Sine has a DIY cosplay from Dragonball Z, too!

Which makes them fun to re-create as cosplay, too. Another cool Rihanna costume from Sine!

And here's a dress from the Cannes Film Festival.

But why buy couture when you can buy mushrooms? (Yep, Sine's dress is made from mushrooms, and she's rocking them!)

Another Cannes look, made from durian fruit. I wonder how she got that poof in the skirt without using floaty fabric?

Avengers fans will appreciate this one:

It's Natasha Romanoff, and she's ready for a (food) fight.

Think this dress will make the news?

It's a dress made entirely of newspaper. How cool is that?!

Kale has been super popular recently.

And I guess it's good for more than just eating; it also makes for a very nice tulle replacement!

Hmm...something about this cosplay seems fishy.

Now THAT is am actually breathtaking food-based ballgown.

It's daVinci's most famous work.

Ah, if only Renaissance-folk had good ol' pizza. I think that Mona Lisa looks a little happier...

And she's pretty much got the whole cast of 'Aquaman' figured out.

Here's the evidence: an Arthur Curry and a Princess Mera cosplay! Aren't these DIY costumes insanely creative? Share them with the other cosplay friends you know!