You have to wonder at her reaction to Buddy. | 22 Words 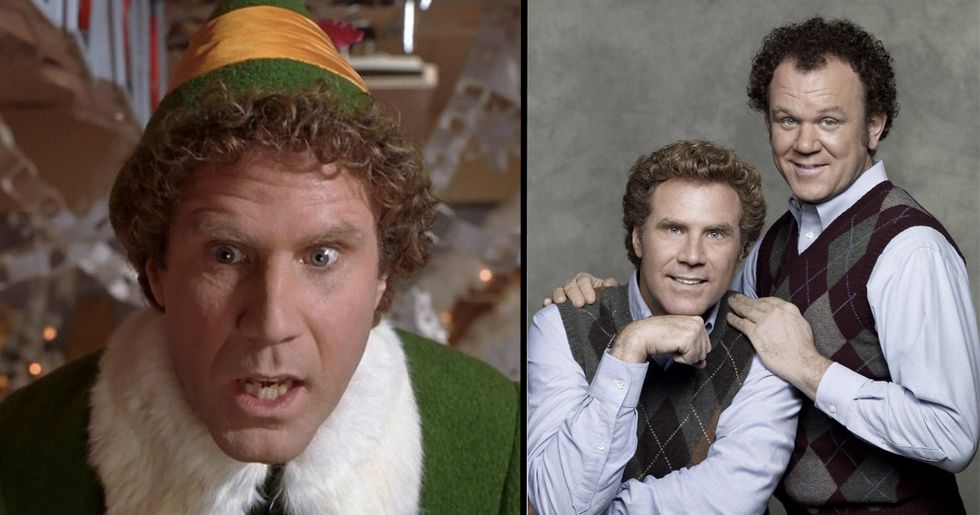 Right around this time of year, everyone is breaking out the Christmas movies– And one popular Christmasy comedy is Elf. Something about Buddy the Elf's extreme naïveté tickles our funny bones!

However, one man's yearly Elf rewatch ended with an epiphany. During his movie binge, blogger Trent decided that Elf is most definitely a prequel to Step Brothers. Oh, and he's pretty sure that Buddy has adult-onset diabetes. But it's the prequel thing that gets interesting!

As it turns out, both movies have a few things in common. When you look at the bigger picture... well, Trent might be on to something.

Check out this wacky theory, and see what you think when you're done!

We all know Elf, right?

It's the classic "boy lives in the North Pole, discovers he's human, meets father, finds stepfamily, and shows everyone the true meaning of Christmas'" story.

And of course, it stars Will Ferrell.

Ferrell plays Buddy the Elf, a grown man so full of childlike wonder that he, well, gets into countless shenanigans.

By some twist of fate, he ended up in the North Pole as a baby.

And there, he was raised as an elf!

Then he finds out he's human.

So he travels to New York city to meet his father (and step-family).

He kinda sticks out at first.

And his biological father isn't too thrilled about it for most of the movie.

And he gets off on the wrong foot with the love of his life.

Basically, Buddy has a rough time of it.

No matter where he goes, he can't seem to fit in.

Until his family accepts him.

And that's where the story ends.

Or is it? Because one blogger got an idea for what happens after Elf fades to black.

But here's the thing: it actually makes sense when you really think about it. After all, Elf was made years before Step Brothers. They could very well take place in the same universe!

Let's start with the moms.

According to Trent, this is one of the bigger connectors between the two movies. Mary Steenburgen plays the mother of Will Farrell's character in both movies.

In Step Brothers, she plays the divorced mother of Brennan Huff. In Elf, she's technically the step-mother of Buddy the Elf.

But Trent had an explanation.

Which is that Walter, Buddy's biological father, loathed him for most of the movie– whereas his step-mother was really happy to meet him. So logically, if there were a custody battle, she'd probably win.

You have to wonder at her reaction to Buddy.

Most women would be confused at best, and furious at worst, if their husband's long-lost son from a previous relationship showed up on the doorstep out of the blue. Yet she's the most welcoming out of the whole family! There's obviously a connection between them– certainly more so than between Walter and Buddy.

And thus, the divorce.

We know that Step Brothers' Nancy is divorced, right? So what if she and Walter had done the divorcing? And with her being a more fit parent, she got Buddy!

Also, here's WHY there would be a divorce.

Don’t even ask why they got divorced. Walter absolutely ended up getting fired from his job and became an alcoholic.

Yep. There you have it, folks!

Next up: the name change.

Brennan Huff is a far cry from Buddy, right? But what if, after the divorce, his mom got Buddy a name change to make the transition into the real world less difficult?

How about the brothers?

Both Buddy and Brennan have younger brothers. And some people think that might not be a coincidence!

But Buddy and his brother got along.

However, familial relationships– especially between siblings –can change rapidly. If something went bad between them (say, their parents' divorce), it might end in resentment. Thus, we have Brennan and his little brother in Step Brothers.

Buddy and Brennan can both sing.

And what's more, they both like singing! Heck, Buddy is so enthusiastic he'll unknowingly wander into a women's bathroom to pick up a harmony.

But Brennan isn't so carefree.

Now, you might think this doesn't fit because Buddy has no problem belting out songs in public, where Brennan is scared to, but it actually could make sense!

The key is this scene:

After the events of Elf, Brennan (Buddy) takes part in a talent show and loses his confidence, so that's why he's afraid to sing in front of Dale!

Both characters are animal lovers.

In Step Brothers, it's mentioned that Brennan recently worked at PetSmart. This means that he had to like animals enough to work around them all day, which is definitely something Buddy would do.

And Buddy is overly enthusiastic about animals!

For reference, please see the above clip of Buddy being mugged by a raccoon.

And now, the final piece.

It's another pretty obvious one– both Buddy and Brennan are unable to function as adults.

Look at each of them:

When Buddy's stepmom asks how long he'll be staying with them, he answers "Well, I was thinking...forever?" Meanwhile, Brennan refuses to move out of his mom's house or get a job– maybe because he's actually Buddy, who wouldn't know how to!

And once again, the father-figure does the pushing.

In Elf, it's Walter who tries to get Buddy out of the house and turn him into a normal adult, while his step mom pities him. And the same thing happens in Step Brothers, as Brennan's step dad pushes him while his mother frets about it.

Maybe she's worried for a reason.

Like, maybe she's still wondering how Buddy (Brennan) is holding up after her divorce with Walter? Food for thought!

You have to admit, they're very similar personalities.

Brennan in Step Brothers starts off as immature as Buddy– almost like we're picking up where Elf left off! Step Brothers is all about two childish men learning to be adults and to be part of a family. Sounds like a good next step for Buddy!

Trent is pretty convinced that these two movies occupy the same universe, and that Elf is, in fact, a prequel. Are you? Has this eye-opening theory caught your attention? Share it with friends and see if they agree!