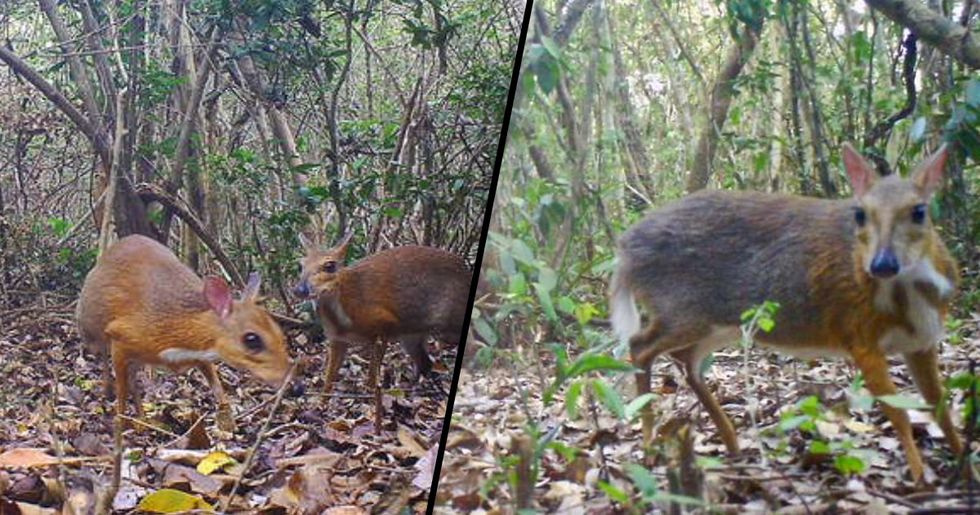 This Tiny ‘Deer’ Is the Size of a Rabbit

The animal kingdom is a vast and wonderful place, and we are lucky enough to share our planet with so many different species of animals.

But it's no secret that too many species have been declared extinct over the years, mostly thanks to humans neglecting our beloved Planet Earth.

However, there have been some species of animals that aren't as extinct as we once imagined.

A tiny deer, that is around the size of a rabbit was presumed to be extinct for around thirty years. However, it has now been miraculously re-discovered in Vietnam!

Keep scrolling to learn more, and witness the cuteness in these amazing creatures...

Our planet has lost too many species of animal.

It's impossible to say how many species of animals there are out there (estimated between 1.4-1.8 million), but what we do know is that, already, we've lost an awful lot since the beginning of mankind.

It's no secret that we humans have something to do with the rapid extinction rate...

WWF has found that the rapid loss of species we are seeing today is estimated by experts to be between 1,000 and 10,000 times higher than the natural extinction rate.

Unlike the mass extinction events of geological history, the current extinction challenge is one for which our species appears to be almost wholly responsible.

It is scientists who declare species to be extinct.

But sometimes, these scientists can be wrong.

A tiny creature has been re-discovered recently...

The creature in question was presumed by experts to be extinct nearly 3 decades ago, and it has finally re-emerged for the first time.

It has been nicknamed the "Vietnamese Mouse Deer"...

Purely because it is a species of mammal that looks like a deer, but is around the size of an average rabbit.

Its scientific name is the silver-backed chevrotain, and it was last recorded alive twenty-five-years ago when a team of Vietnamese and Russian researchers obtained a dead chevrotain from a hunter.

The species was first described by scientists in 1910 when 4 specimens were collected around Nha Trang.

There were no scientifically verified records again until 1990 when a single animal was confiscated from a local hunter in central Vietnam, further north.

People even began to doubt the species ever existed...

Vietnamese biologist and Ph.D. student with the Leibniz Institute for Zoo and Wildlife Research An Nguyen told CNN, "For so long, this species has seemingly only existed as a part of our imagination."

Experts are eager to protect the little deer...

"Discovering that it is, indeed, still out there, is the first step in ensuring we don't lose it again, and we're moving quickly now to figure out how best to protect it," he also said.

Scientists believed the creature had perished to habitat loss...

The silver-backed chevrotain had been among a list of the twenty-five "most wanted" lost species by the Global Wildlife Conservation (GWC).

Scientists were eager to capture the creatures on-camera...

After interviewing villagers and forest rangers near the beach city of Nha Trang, the team of scientists set camera traps for 5 months in areas where the locals said they may have seen the animal.

275 photographs of the tiny mammal were captured as a result.

The team went on to set up a further twenty-nine cameras in the same area, this time recording 1,881 photographs of the little creatures over a 5-month period.

Despite their nickname, chevrotains are neither mice nor deer...

They are also the world's smallest ungulates or hoofed mammals, according to GWC. They are shy and solitary, appear to walk on the tips of their hooves and have two tiny fangs.

Just because this creature has been re-discovered...

Doesn't at all mean that it still isn't under threat. Experts are doing all they can to protect the little mammal, alongside hundreds of other species, and the importance of protecting the animal kingdom cannot be stressed enough.