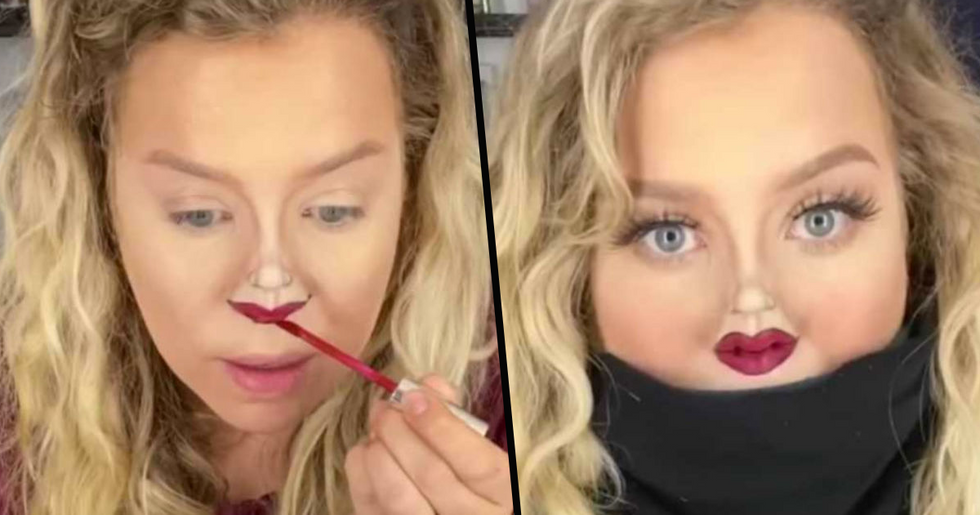 This Tiny Face Challenge Is the New Quarantine Make-Up Trend

Ah, another day another viral trend doing the rounds online. It truly seems like not a day goes by without some strange beauty trend making its way into our lives. Although this one is particularly horrifying.

One talented makeup artist is creating a "tiny face" on herself - and it's as creepy as it is impressive.

Kickstarted by the one and only Kylie Jenner, Instagram became obsessed with the shade of MAC lipstick so they could recreate the star's signature look.

Although we have to say it shows some skill.

It's called the "tiny face challenge."

And it's been created by makeup artist, Jaime French.

First, you draw a nose on your nose.

Around halfway down the bridge, to be precise.

It takes some serious shading.

Next, turn the tip of your nose into a mouth.

An upper lip on the end of your nose, and a lower directly below.

You'll want to color these "lips" in.

Red makes for a bold choice.

It starts to look pretty freaky.

But to get the full effect ...

You need to cover up your actual mouth.

This makes for an incredible optical illusion.

Will you be trying it at home?

Want more of the most mindbending looks? Scroll on...