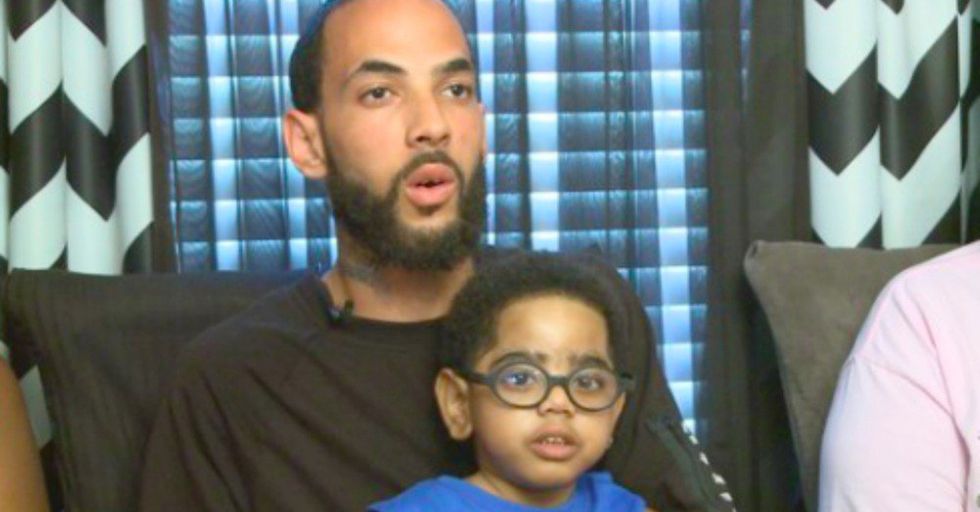 A.J. Burgess was born a month too early and desperately needed a new kidney. At two years old, he weighs only 25 pounds after spending ten months in a neonatal intensive care unit. Doctors found that A.J.'s dad, Anthony Dickerson, was a perfect donor match. But the hospital wouldn't let him help his son.

Dickerson was serving time in jail, and was planning on giving his son his kidney as soon as he could when he got out.

A.J.'s mom, Carmella, said, "He made it his business to say, 'Once I get out, I'm gonna promise to my son that he can get a kidney.'" The family was so excited to finally have a solution to their son's health issues.

But then, Dickerson was charged with violating his parole.

A letter from the hospital to the county jail said, "If Mr. Dickerson could be escorted to Emory for blood work and a pre-operative appointment tomorrow, September 29, we will be able to continue with the scheduled surgery."

But when Dickerson left the county jail, the hospital suddenly didn't want to let him go through with the surgery. They wanted to wait three months and see if Mr. Dickerson complied during his parole period before they would perform the transplant. The next note from the hospital said, "The Living Donor Transplant Team at Emory has asked Mr. Dickerson for evidence of compliance from his parole officer for the next three months. We will re-evaluate Mr. Dickerson in January 2018 after receipt of his completed documentation."

But A.J. didn't have time to waste. The family said that it shouldn't matter that Dickerson had to go back to jail. All that should matter is that he is healthy and drug-free.

Really, what it comes down to is the health of their child. "It's about my son... he's been through a lot," Carmella said, "...We've been waiting on this. And Dad making a mistake shouldn't affect what he wants to do with our son." Dickerson added, "What do he got to do with the mistakes I made? Nothing." He just wants his son to have a chance at living a normal life. "All I ever wanted was... a son," A.J.'s dad said,"...and now he's in this situation."

CBS asked the hospital, Emory Healthcare, for comment, but the hospital said that it could not share specific information about the case because of doctor-patient confidentiality.

"Guidelines for organ transplantation are designed to maximize the chance of success for organ recipients and minimize risk for living donors," they wrote. Carmella argued that this red tape could be costing her toddler his life. If they wait until the hospital lets Dickerson donate his kidney, A.J. might not have surgery until January, which could be too late. Their best bet until then is a kidney transplant waitlist. They've started a GoFundMe page to build awareness of their issue and help themselves support A.J. People were not happy with the hospital's decision...

When the story was posted to Twitter, people responded with anger that the hospital didn't allow Dickerson to donate his kidney for vague reasons.

@travilingirl68 wrote, "This is unethical, immoral, and absolutely horrible."

Others questioned the morality of keeping Dickerson from helping his son, whether or not he had violated his parole.

People thought that it didn't make sense for A.J. to be punished for his dad's parole violation.

But mostly, people were saying, what the heck?!

Most people were incredulous that the toddler was getting denied a transplant. They were heartbroken for A.J. and hope that he can get the help he needs soon.
20%

$9.85 $7.88
Buy Now
See More Deals
We hope you find these deals as awesome as we do! Just an FYI: we may receive a share of sales from links on this page