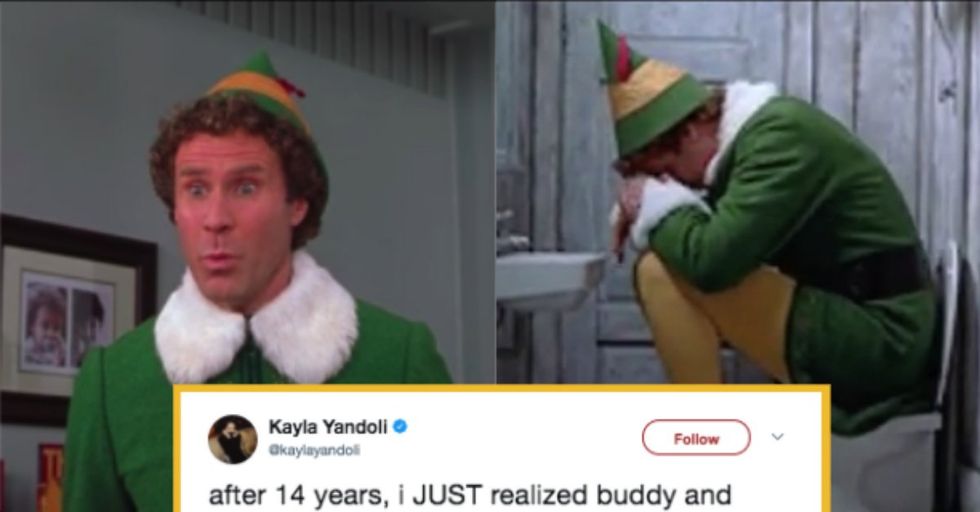 It's happening, people! It's time to light a candle, snuggle into your PJs, and get ready for the holidays.

Part of that ritual is watching the movie Elf, starring Will Ferrell. You might think you know everything about the movie, but there's one detail we're willing to bet you might have missed. And it's going to break your heart.

It's officially December! You know what that means? It's time to watch the movie Elf.

(Unless you're like us and you watch it year-round. Then it's time to watch the movie Elf AGAIN!)

Sorry, but it's just true. Elf is delightful and wonderful and it perfectly encapsulates everything that's so wonderful about the holidays.

In case you've never seen it (GASP!), here's a quick recap of the film. Will Ferrell plays Buddy the Elf, who doesn't exactly fit in with the other elves at the North Pole.

That's because he's actually a human child who was put up for adoption by his parents Susan Wells and Walter Hobbs. As a baby, he snuck into Santa's bag one Christmas and Papa Elf decided to raise him at the North Pole. Papa Elf tells Buddy that his mom Susan has passed away and his Dad is on the Naughty List.

Buddy decides to go to New York to meet his dad and change his ways. While he's there, he also meets Jovie (played by Zooey Deschanel).

Buddy and Jovie don't hit it off right away. Buddy's intense love for all things Christmas is a bit difficult for Jovie to take in. (We feel your pain, Buddy. Some people just don't get it.)

But eventually, Jovie and Buddy fall in love.

Hooray for love! So yeah, Elf is the perfect movie that will make even the Scroogiest individual smile. But there's one detail about the movie you might not have noticed, and it's going to make you cry happy tears as soon as you learn it.

Ready for it? Here we go:

Yep. Apparently, Jovie and Buddy have a daughter and name her Susie. You can see her name on her adorable little elf hat. In case you don't get why that fact should be making you cry, we'll remind you that Buddy's late biological mother was named Susan. They named their daughter after Buddy's mom!

If you'll just excuse us, we're gonna need a minute.

That is so sweet! And so sad! Uggggghhhhhhh this movie!

We're not the only ones completely shook up by the revelation:

It's such a small detail that most people wouldn't even notice, but it's also proof that the film has a lot more going on than just a bunch of Christmas antics and syrupy spaghetti.

Petition to name Jovie and Buddy one of the best Christmas movie couples of all time?

Now, dry your tears, boil some spaghetti, and grab the Mrs. Butterworth's.

'Cause it's December. And it's time to watch Elf. Again.