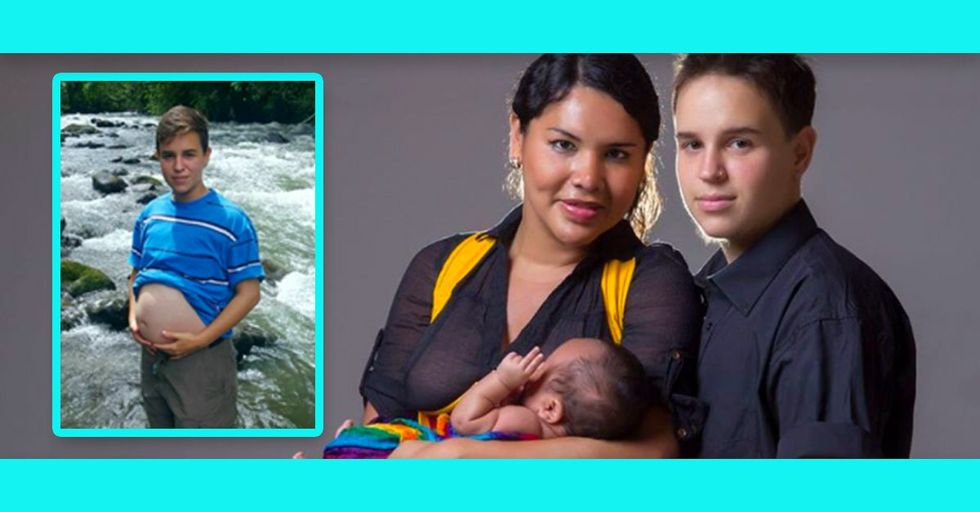 Families come in all shapes, sizes, and gender identities! Diane Rodriguez, one of Ecuador's preeminent transgender activists, and her partner Fernando Machado, who is also transgender, welcomed an adorable little baby in June 2016.

They expanded their family and made history in one fell swoop, since Fernando, a transgender man, was the one who became pregnant and gave birth.

According to the BBC, "For many, they are a symbol of growing tolerance in the region." Diane was born as a man named Luis, and Fernando was born in Venezuela as a woman named Maria.

The story of their romance is the definition of a whirlwind!

They met on Facebook, and things escalated quickly. Machado told the BBC, "I was on a bus to Ecuador [where Diane lives] days after we started chatting online. After three weeks of living together, I was pregnant."

Neither Diane nor Fernando has had gender reassignment surgery, so the couple was able to conceive without any medical intervention.

The moment Fernando found out he was pregnant? "I started crying with happiness, fear, and dread, all at once," he said. "It was the most beautiful moment. I had never felt like that before. Wow, at last, I am completely happy."

Being transgender is not an easy life to lead in South America, and Diane has been a true fighter for her rights.

When she came out to her family, she was initially cast out and forced to live on the streets, where she was actually abducted several times. But she never gave up, and in 2013, she became the first transgender candidate for Congress in Ecuador.

The couple has a legion of loyal fans whom they kept updated throughout the entire pregnancy journey.

It's incredible that these two people who've been through so much hardship are so intent on fighting for their human rights that they choose to share the most intimate details of their lives in order to show how beautiful and deserving of happiness they are.

Because of their outspokenness, the couple has received backlash from even the most unexpected sources.

They've garnered some backlash from the LGBTQ+ community in Ecuador — some believe that the relationship Rodriguez has fostered with President Rafael Correa (who's made transphobic and homophobic comments in the past) is only to help her get ahead in the political world.

But regardless of the challenges they face, Rodriguez and Machado are hard at work promoting acceptance and love for all.

Especially for their young child! They remain pretty private about their kid, which is understandable considering their high profiles.

For weeks after their baby was born, they referred to them as Caraote, an affectionate nickname that means "the snail."

And it's true — pretty much all newborn babies look like little snails! Machado told the BBC, "We are the same as other families. Even though we might not have the same rights, we're the same."

By publicizing their pregnancy journey, Rodriguez and Machado are showing that all people are capable of forming loving, beautiful families and deserving of that opportunity.

Rodriguez has spoken about how she never thought she'd get the opportunity to be a mother and have a family because she is transgender.

But now, she's proving her past self and everyone else wrong!

While Machado isn't the first ever transgender man to get pregnant, he is the first high-profile man in South America to give birth, and that's huge. This adorable family is making huge strides for human rights and ensuring that their child will grow up in a world full of more love in it than there was before. And that is a beautiful thing.