This one, on the other hand isn't quite as relatable. | 22 Words 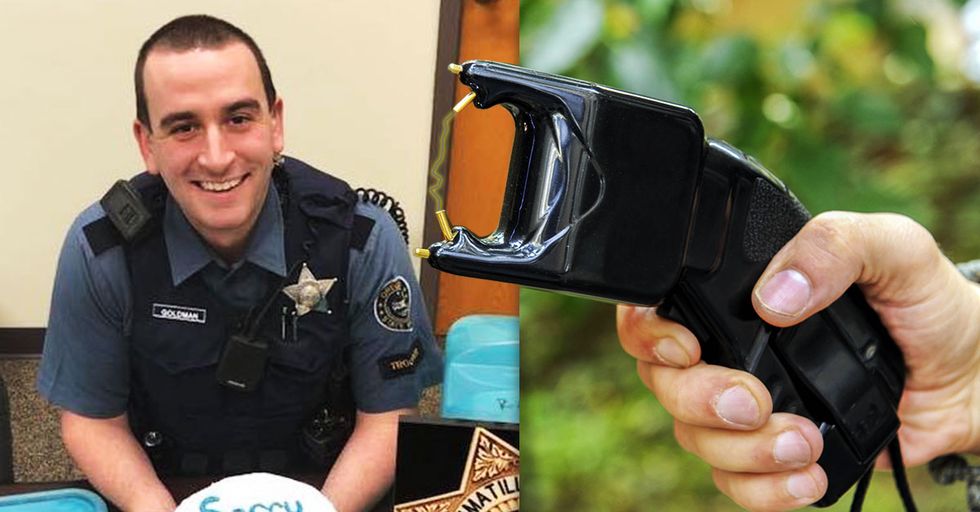 But if you're lucky, your mistakes are more along the lines of "Oops, I accidentally poured too much milk into my cereal bowl" rather than "Oops! I just tased the wrong person!"

If you ever do accidentally tase the wrong person, though... First of all, what is your life? Secondly, there's only one correct way to respond to the situation. With cake!

Pretty standard stuff. But before long, things took quite a turn.
The male subject the police were responding to soon become belligerent. A scuffle ensued when a Trooper started to pat him down. There was only one thing the cops could do.

The Deputy arrived on the scene and made the decision to tase the subject.

Again, nothing too out of the ordinary here. Unfortunately, the Trooper who had been performing the pat down was still in contact with the subject.
In case you're not aware of how tasers work, two prongs are deployed from the taser "gun." A circuit is created between the two prongs and the gun itself, and the person the prongs hit gets an electric shock.

One of the prongs hit the subject...but the other one hit the Trooper. And since the Trooper was touching the subject, the circuit was completed and—

ZAP! The Trooper was tased along with the subject. The Deputy felt bad at this turn of events, but he had the perfect response...

The Deputy bought the Trooper a cake!

And the cake read "Sorry you got tased." (Kind of passive language if you ask us. He didn't just get tased.)

Getting tased is a thing that happens (apparently). The least you can do if you accidentally tase someone is get them a cake. Here are a few more cake apologies that are sure to gain forgiveness:

You may suck at drinking, but you're great at buying cakes. And that's what's really important. If you're good at buying cakes, you can get away with almost anything.

If you ever throw someone through a window, this is the only acceptable response:

We're not really sure what the motorcycle has to do with the apology. There's clearly quite a bit to this story. Maybe we could discuss it over several slices of cake!

We're guessing this cake wasn't ordered from a grocery store...

Hey, we've all been there. And before you ask: No, buying this doesn't give you permission to be grumpy in advance. That's not how apology cakes work.

This student got her professor an apology cake after showing up late to his class every day:

We can only assume it was English class she was missing so much of due to the misspelling of "every day." Still, cake is cake. We're not here to nitpick over something like grammar when frosting flowers are involved.

This might be the most relatable apology cake we've ever seen:

Everyone knows that whatever you say during a game of MarioKart cannot be used against you in any court of law. That being said, it's probably good practice to bribe your fellow players with snacks. Maybe it'll even keep them from using the red shell on you.

This one, on the other hand isn't quite as relatable.

The sprinkles are what really sell this one. And the pink icing. This cake has a lot going for it.

This cake has us a bit confused.

Either it's a rather misguided attempt at making someone feel better about their recent diabetes diagnosis, or it's apologizing for the diabetes whoever eats it is sure to contract after consuming such a sugary beast. Either way, it's certainly...interesting.

And this one is totally beyond comprehension:

We could point out that they could have just written "Happy Birthday!" and no one would be the wiser. But we're too busy drooling over this giant cookie. So never mind.