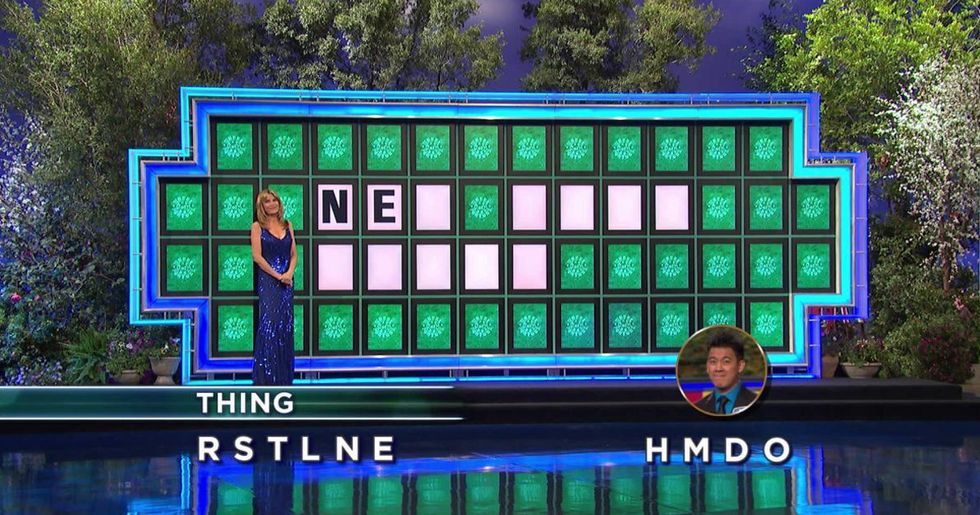 Sure, Wheel of Fortune is the game show grandparents watch while they're eating their early bird dinners.

But it's also a staple of game show television, and you have to admit there's a soft spot in all our hearts for the old-fashioned spectacle.

Wheel of Fortune word puzzles are often strange phrases or collections of words that we don't use in everyday life.

One Twitter account, Wheel of Fortune Answers, has decided to take screenshots of unfinished puzzles and finish them with entirely plausible answers. They're ridiculous and hilarious and will make you giggle a lot.

Obviously, this is "potato cannon." What else could it be?

Yes, of course, this is the known phrase "enthusiastic shortstops." It simply cannot be anything else.

Raise your hand if you know at least one of these. If you live in Brooklyn, you definitely do. The next one makes me laugh the hardest.

Just the word "slick" next to the word "poops" is hilariously gross and genius. Ew!

I really want to know what the real answer to this is because I cannot imagine it being anything else now that "dollhouse purgatory" is in my mind.

Someone in the comments wrote that the actual answer is "lawn furniture" which makes sense but I don't like it nearly as much as "lawn carnivore."

Isn't...isn't every parade a shame parade? Sorry, I just don't really like parades. They make me feel weird.

The real answer to this one is "new baby buggy," and the account posted the video of the guy actually answering it and it's incredible. The next one might make some people mad.

This might come to a shock to the people who live in the middle of the country, but a good portion of people from the coasts refer to your states as "flyovers." Sorry.

A War of Teens

I think it's actually called The Hunger Games, but what do I know?

This sounds like a lot of nightmares all rolled into one very unpleasant evening. No thank you!

The Meaty Canal of Desire

Wheel of Fortune getting frisky! "The Meaty Canal of Desire" either sounds like it's describing a vagina or a tunnel to a really good BBQ joint.

You've Got to Be F*cking Kidding Me

What! Else! Could! It! Be! The next one is just simply hilarious.

People in the comments are like, "This couldn't be right because the 'e' is already on the board." Which like, yeah, fine, but it's also an absurd phrase, and the whole point of this account is that it's wrong, so shush.

Someone in the comments suggested "Vintage Tinkler" and honestly, I don't know which one I like more.

This one is so lazy and so funny, and I love it so much. Who is in charge of this account? They should get a medal.

This makes sense, and it's also something that people would actually say! I think they got it right.

I love this. I love this so much. Share this with the biggest Wheel of Fortune fan in your life (your grandma).