Allen also posted a photo of the "roads" (or lack thereof). | 22 Words 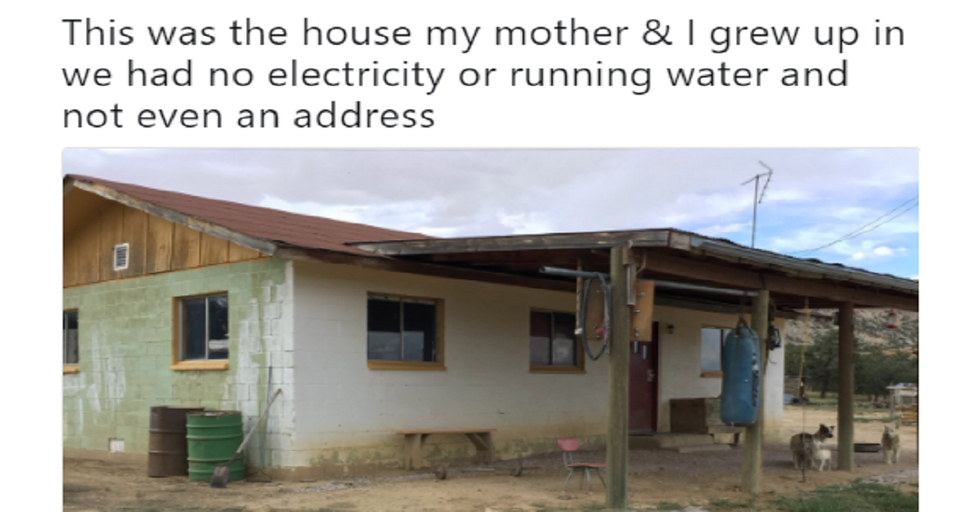 When people think of Indian reservations, they mostly think of big, wealthy casinos, but this is a misconception that needs to die out.

In an effort to spread awareness, Twitter user @lilnativeboy (whose real name is Allen) shared his experiences to shed some light on what it's actually like to live on an Indian Reservation — and the pictures are eye-opening to say the least.

Allen started off by showing us his childhood home.

Allen grew up on the Navajo reservation in New Mexico. His house, like most of the others there, had no electricity or running water. He didn't even have an address.

One of the many consequences of not having an address is not being able to register to vote.

Which means you won't be represented in government, which means your situation won't get any better. It's a vicious cycle.

Since Allen's family had no water in their house, they had to go and get it twice a week.

If they ran out, they had to drive two hours to haul back more.

Having no running water turns everyday tasks into real challenges.

Simple things like doing the dishes or taking a shower become incredibly difficult.

Even going to the restroom is a chore.

In that situation, I think I would just hold it. But that's much easier said than done. And it gets much worse.

As scarce as water is, food is even harder to come by.

Just think about that for a second.

There might be thirteen grocery stores within 25 square miles of you. And same goes for hospitals.

Even if you had access to a grocery store, the quality of food was bad.

And the people there are even charged a "junk food tax."

No electricity in homes also means no lights at night.

So every evening is lit by either candles or (if you're lucky and can get some batteries) a flashlight.

There are also no dumpsters or garbage trucks.

Meaning they just have to burn all their discarded items in a fire pit. Brace yourselves. It gets worse.

There is no 911 or emergency services either.

Hopefully you live near one of those three hospitals. Otherwise, you're screwed in the event of a medical emergency.

Allen also posted a photo of the "roads" (or lack thereof).

You basically need a truck to get around, as any smaller car would get wrecked or stuck.

The problem isn't just limited to the United States, though.

Apparently, the situation in Canada is just as bad.

These photos aren't old relics either. They're brand new.

Meaning the majority of people there still live in these horrible circumstances today.

Allen has kindly provided us with a few links if you would like to help out their cause.

If you can't donate, you can at least spread awareness. The first part of addressing a situation like this is making sure people know what's going on. Tell your friends and family, and be sure to share this travesty on social media.