This UberEats Driver Had the Funniest, Saltiest Response To a Customer's Question | 22 Words 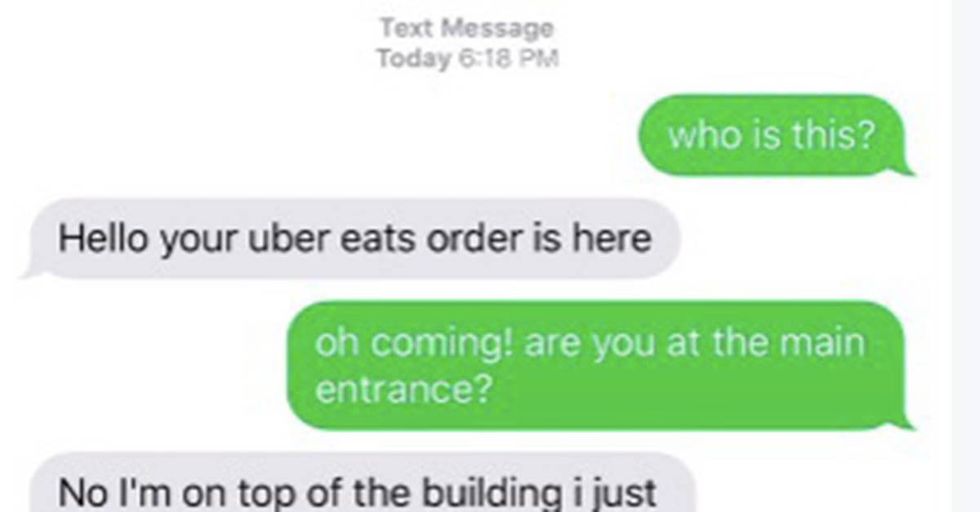 This UberEats Driver Had the Funniest, Saltiest Response To a Customer's Question

One thing about the new "gig economy" that has regular people driving and doing tasks for others: They're not really professionals. That's not to say that they can't be good, but you're basically just asking another dude to do something for money.

So don't be surprised if they don't always shoot back buttoned-down responses to your questions.

This girl was certainly taken aback, though!

Let's be honest: You might not love Uber, but the concept and UberEats are modern marvels.

They might not be pro drivers running the show, but they certainly are getting the job done.

As long as the food arrives warm, do we REALLY care what journey it took?

They have a point, you know. It's a weird concept until you're used to it.

Because, at the end of the day, we don't know who's doing what until we're face to face.

Or, in the case of one girl who was a little flustered, a DIScourteous text. (Albeit, the text WAS pretty damn funny regardless.)

This guy ordered some food on UberEats and had an honest (if not a little dumb) question for his driver.

His driver let him know what's up real quick.

While it might not have been "professional," this response seems to have everyone applauding and laughing.

I mean, what's the harm in some unexpected sarcasm? (Also, the question was a little silly.)

Also, it seems that she sorta put the driver through the ringer, not answering his call, then texting him to ask who it was that had called.

I mean, if you ordered food, just answer your phone, lady!

We might never learn the identity of this driver (because he could get kicked off UberEats if they found out), but people are still guessing as to what TYPE of person he is.

That sounds...about right. He's a busy guy. Just pick up your food and let him get on with his life!

It may not be "the customer is always right," but people are finding his humor to be pretty worthwhile.

Would you tip extra for this? I'm pretty sure I would. Assuming the guy was being more funny than mean. I'd make the judgment when I saw him.

It's only human nature to wish she had fired back with some clever response.

She was too stunned to come up with anything, though. We can all relate to that.

The tweeter has found a modicum of "Internet fame," but insists she's not famous.

I'm...inclined to agree. She's got a great story, though! And, we can only assume that she got her food, even if she had to wade through a little bit of snarkiness to get there.

So that said, maybe the waiting ISN'T the hardest part.

Maybe it's digging deep for a snappy comeback that you know will never come.

I mean, as far as Uber Eats trespasses go, that one's pretty mild.

Watching your food circle you for minutes and minutes, that's troubling!

Still, let's give our gratitude to this quippy Uber Eats driver and all the others who bring us food so we don't have to leave the house.

You're doing God's work. Thank you from the bottom of our hearts.