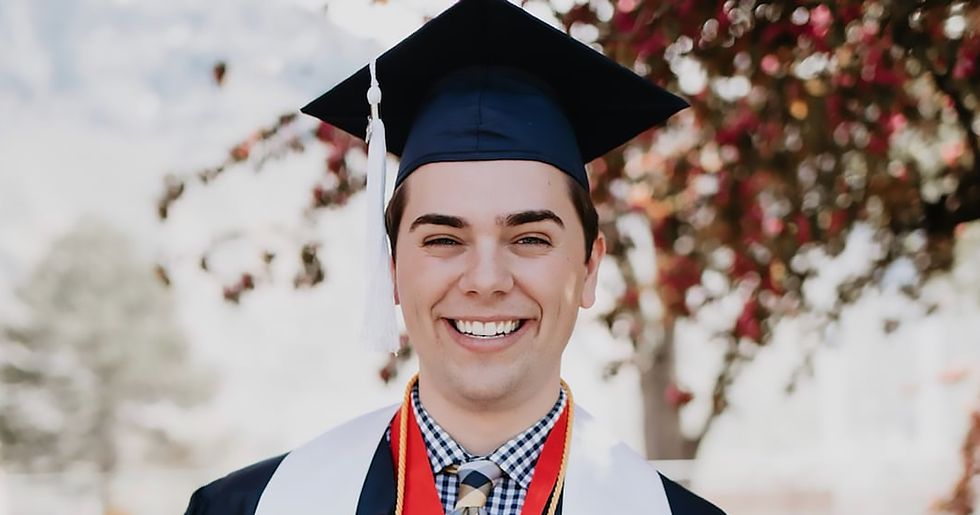 Coming out is challenging for just about anyone. It's vulnerable: you're sharing personal information that not everyone accepts. You're staking out part of your identity and saying "this is who I am". Even if you think that people will be supportive, it can still be scary.

So imagine coming out when you're Mormon and your faith does not support you. When you tell people about your sexuality, you're unlikely to get hugs and love, and you risk judgment. Coming out in a faith community that is anti-LGBTQIA ups the ante quite significantly.

So NOW imagine doing all of that: coming out, coming out to Mormon friends and family, coming out when you think you'll get a bad response...and add in all of your college classmates and professors.

If that sounds terrifying, then you'll be impressed by the bravery of Matt Easton who did just that at his graduation from Brigham Young University. Don't worry, we have video, and you will cry.

Congrats to @BYU Poli Sci Valedictorian @easton_matty! It was terrific working with you on @byupas activities. We… https://t.co/rkse9Aqlua
— Michael Mower (@Michael Mower)1556337411.0

In and of itself that's not too exciting.

But Matt's graduation had a few elements that made it stand out from the crowd.

He's not just any college graduate.

Matt graduated with a 4.0 GPA in Political Science.

Impressive! But he's not the only one who has good grades.

Ok ok, how about this?

Matt was also the valedictorian of his class, and gave a speech to the full graduating class at the ceremony.

That's all well and good.

But wait until you hear what was contained in his speech.

Yeah, this kid came out in front of everyone during his college graduation.

Excuse me I have some secondhand anxiety right now, that sounds terrifying.

Wait for it, it gets even more impressive.

Matt attended Brigham Young University. You know, the Mormon university that has an Honor Code guiding students' ethics and behavior.

And while the Honor Code doesn't EXACTLY condemn homosexuality...

So you're telling me that this baby 20 something stood up against his whole university for LGBTQIA visibility?

Matt himself even says it.

During my time at BYU, I have slowly come out to my closest family members and friends. However, this is the first… https://t.co/srPXuKoVkE
— Matty Easton (@Matty Easton)1556337554.0

"I felt it was important to share both for myself and for the LGBTQ+ community at BYU".  I'm not crying, you're crying.

If you're getting chills, you're not alone.

This was an amazingly powerful choice from a young person who wants acceptance for himself and his community.

Historically, the Mormon church has not been open to LGBTQ+ members.

But they seem to be softening...somewhat.

Just recently the church made some changes that are more LGBT friendly.

Children of LGBT+ couples can now be baptized at 8, rather than having to wait until they're 18.

Young people like Matt have been a major part of the shift.

“My generation, and even more so the generation after me, we’re changing the way we talk about our identity and who we are," Easton said.

Movement is still slow though.

“It’s okay to be different, or not fit the norm. When I started at BYU, I didn’t think that. I thought that I had to be what everyone before me was. I do feel from my own experience that this is changing, or maybe I’m changing. I hope that our country, my faith, my community will follow in a similar fashion," he shared.

In fact it's only a recent occurrence that allows students to identify as gay.

In 2007, the honor code was changed so that students would not face "official recrimination" if they identified as gay.

So how did Matt Easton decide to put himself in a very vulnerable, public position?

It took time and support.

He originally came out to his parents two years ago as he was trying to understand himself.

Their support, combined with the support of faculty, gave him confidence.

He wasn't originally sure if he would speak about sexuality.

But after talking with his parents and letting the dean look over his speech, it was decided.

And the response was so much more than he could have hoped for.

“I was preparing for awkward silence," he said. “So when people started clapping, it was a little overwhelming. To have a group that I had for so long thought would hate me or ostracize me actually celebrate and accept me, it was awesome."

Quickly, the response grew beyond the people at the speech.

Students and faculty began tweeting and the response was enormous.

His teachers applauded him.

Which shows just how far the school has come.

Even KRISTIN CHENOWETH got in on it.

You've truly made it as a gay man when Kristin loves you.

a valedictorian at this BYU commencement just came out to the entire marriott center and I have never felt more sec… https://t.co/rkIRELV3GR
— t-bone (@t-bone)1556301432.0

BDE for the win.

Oh, and if Kristin Chenoweth isn't enough for you, what about Chasten Buttigieg?

Yeah, married to THAT Pete Buttigieg.

You can even watch the whole speech online.

Our favorite bit? “I am not broken. I am loved and important to the plan of our great creator. Each of us are."

As if we didn't love this guy enough already...

I am feeling overwhelmed by the reaction to my words today (in the best way possible!) Thank you to all those who h… https://t.co/WCMoOjTwgE
— Matty Easton (@Matty Easton)1556337553.0

His response to the sudden attention has been humble and grateful. What a guy.

AND he shares his day with the people around him.

He thanks his friends, his department, everyone!

If this moment doesn't have you tearing up, you have no soul.

Thank you Matt for being a part of history!

And to everyone reading...

You're welcome. Your day is just a little more gay now.