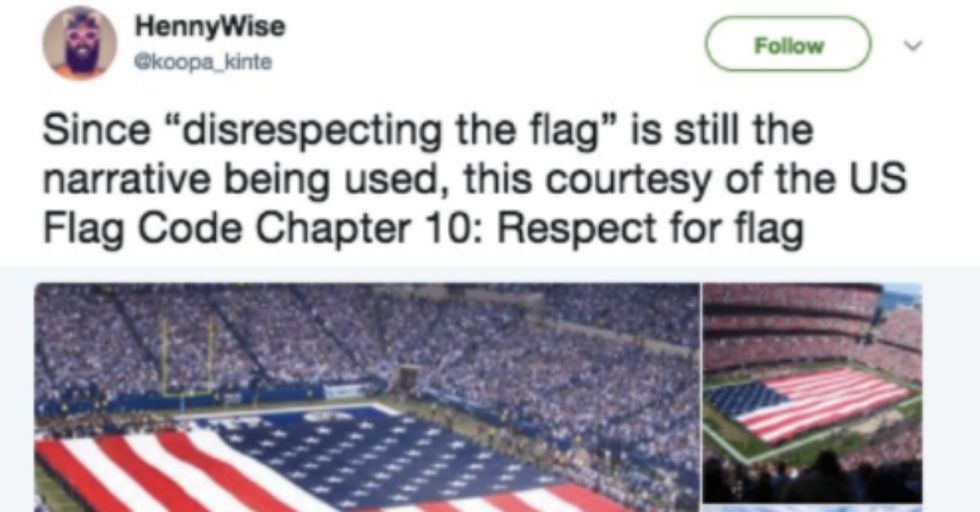 This Veteran Schooled Trump on What ‘Disrespecting the Flag’ Really Means

If you were watching football this weekend, you may have noticed many people kneeling during the national anthem. Kneeling in protest during the anthem is nothing completely new — Colin Kaepernick began kneeling in protest against police brutality and racial injustice last August. However, many people started kneeling this weekend in response to Trump's comments saying that those who kneel during the anthem are "disrespecting the flag."

One veteran decided to teach us all what "disrespecting the flag" actually means. It might surprise you to know that kneeling has nothing to do with it...

Back in 2016, former 49ers quarterback Colin Kaepernick elected to sit rather than stand when the national anthem was played before a preseason game in order to protest police brutality.

During a post-game interview, he said, "I am not going to stand up to show pride in a flag for a country that oppresses black people and people of color. To me, this is bigger than football and it would be selfish on my part to look the other way. There are bodies in the street and people getting paid leave and getting away with murder." Kaepernick continued his silent protest for the rest of the season, typically opting to take a knee rather than stand for the national anthem. His actions were, and continue to be, highly polarizing. Some people believe that Kaepernick's actions are disrespectful, while others see it as an acceptable form of protest. Moving into the 2017, more and more people — athletes and non-athletes alike — have begun to show both their support for Kaepernick and their own anger over police brutality and racial injustice.

On Friday, Trump shared his own views on those who kneel during the national anthem.

Trump was giving a speech in Virginia when he went off-script and said, "Wouldn’t you love to see one of these NFL owners, when somebody disrespects our flag, to say, ‘Get that son of a b***h off the field right now. Out! He’s fired. He’s fired!’" He went on to say, "You know, some owner is going to do that. He's going to say, 'That guy that disrespects our flag, he's fired.' And that owner — they don't know it, they're friends of mine — they'll be most popular person for a week."

Over the weekend, players and fans throughout the league started kneeling during the pregame national anthem. Some players even refused to come onto the field for the anthem, electing instead to remain in the locker room. The #TakeAKnee movement began picking up speed.

Trump continued to share his disapproval of those who chose to protest.

Once again, he implied that kneeling during the national anthem — a form of peaceful protest — is "disrespecting the flag."

One Twitter user decided to call out this harmful and inaccurate rhetoric.

As Twitter user @koopa_kinte  (who is also a third-generation veteran) saw people speak about kneeling during the anthem as "disrespecting the flag," he decided to clarify what that actually means. He turned to the U.S. Flag Code for reference. Here are the things that are actually disrespectful to the flag...

Chapter 10 of the US Flag Code is called "Respect for flag."

First of all, "the flag should never be carried horizontally, but always aloft and free." So every time it's carried onto a game field like this, it's disrespectful to the flag.

According to the Flag Code, it's also disrespectful to use the flag for apparel, bedding, or drapery.

This one isn't even difficult to understand. The act of cutting and sewing something with the flag on it seems inherently disrespectful of the flag. And yet, how many people do you see wearing the flag on the Fourth of July? And nobody calls them out for "disrespecting the flag." Interesting...

According to the US Flag Code, the flag should never be used to advertise.

And yet... We're beginning to see a pattern, here.

The flag should also not be embroidered on cushions or handkerchiefs.

But so many people have articles like those pictured above in their homes. They probably think it shows their patriotism, but shouldn't patriotism require following official Flag Code?

Here's another rule: The flag should not be used on anything that is designed for temporary use.

This one makes a lot of sense, too. The optics of throwing a U.S. flag into a garbage can are problematic at best. This next flag rule is one that many NFL teams have broken... (And wouldn't you know it? It has nothing to do with standing during the anthem.)

It's against Flag Code to use the flag on a costume or athletic uniform.

In fact, every single NFL player is required to wear a helmet with the American flag on it. Where are the people offended by that?

Interestingly enough, the Flag Code says nothing about standing, kneeling, or sitting during the national anthem.

So to all those saying the people kneeling during the national anthem are disrespecting the flag...it's time to check your facts.

So before anyone accuses people of disrespecting the flag by kneeling, they should probably educate themselves.

As it turns out, those who are protesting police brutality and racial injustice by kneeling during the national anthem are not disrespecting the flag. They're simply exercising their right as Americans to protest something they don't agree with. And that's exactly how progress is made in America.