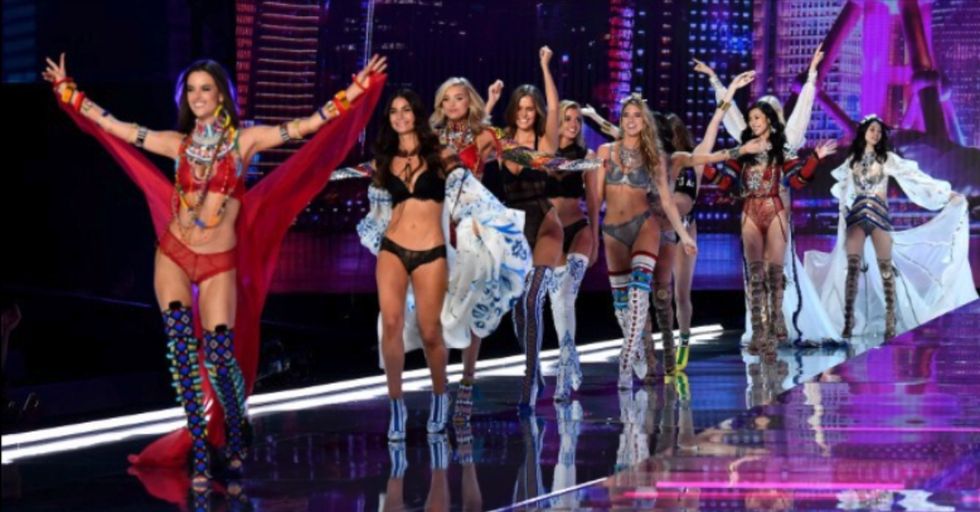 Last week, the Victoria's Secret Fashion Show was held in Shanghai. The models looked beautiful, the fashions were spectacular, and the whole show went off without a hitch — almost.

Unfortunately, one of the models fell while she was walking the runway. It was a moment of extreme embarrassment, but she handled it like a total champ. Still, we can't help feeling for her!

This year's Victoria's Secret Fashion Show may have been the most spectacular one yet.

The show always causes jaws to drop, and this year's was no different. However, people's jaws weren't just dropping because of the exquisite looks traveling down the runway.

One of the models at this year's show was Ming Xi.

Ming Xi was actually born in Shanghai, so this show in her hometown was a particularly special one for her to participate in. Unfortunately, things didn't go very smoothly for her.

Ming Xi was wearing a beautiful, flowy outfit for the show.

In addition to the super flowy skirt, Ming was also wearing an intricate backpiece made of silver and white flowers. Hamilton star Leslie Odom Jr. was singing live as she walked down to the end of the runway. It was then that things took a turn.

Ming's flowy skirt got caught underneath the heel of her shoe, and she tumbled to the ground.

It happened in a split second, but of course, everyone noticed. How embarrassing!

Ming took a few moments to gather herself and adjust her floral wings before once again rising to her feet.

Luckily, another Victoria's Secret Angel came to Ming's rescue. Gizele Oliveira walked up and helped Ming to her feet. Once Ming was ready, Gizele stepped back and applauded while Ming finished her walk. The video of the fall is hard to watch...

If you look closely, you can see Ming's shoe get caught in her skirt right before she falls.

It's already so hard to walk in gigantic heels like the one Ming was wearing. Imagine adding a gigantic skirt and huge metal backpiece to the mix! It's a wonder more of the models didn't fall.

Even while Ming was falling, she managed to keep a smile on her face.

She's clearly a true professional. Things couldn't have gone much worse for poor Ming, but she muddled through like a real champ.

But Ming was certainly heartbroken by the turn of events. As soon as she got backstage, she broke down in tears:

It's not hard to imagine why. Of course, she still looked absolutely beautiful, and the crowd gave her a raucous round of applause as soon as she stood back up.

The show took place last week but was just broadcast on CBS last night. Many people thought CBS should have left Ming's fall out of the TV broadcast.

It's not like they had to leave it in. It makes you wonder: Did they just include Ming's embarrassing moment for the views? It certainly stole the show and has made numerous headlines.

Regardless of CBS' intentions, everyone can agree: Ming is a superstar.

If anything, now more people know just how amazing Ming was at persevering through challenges. There's an important lesson here for all of us: When you fall down, try to keep smiling and get right back up! Also, maybe don't pair gigantic heels with flowy skirts.