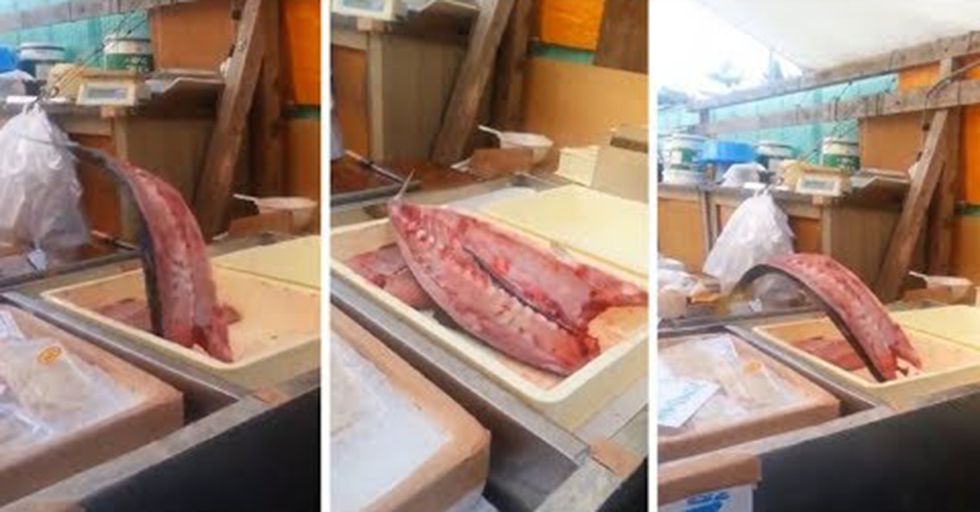 We don't need to be reminded that our meat comes from actual animals, but sometimes we get a twisted tap on the shoulder nonetheless.

This time, a weird occurrence in a Japanese restaurant showed us that sometimes our food can move even long after it's an animal.

It's weird and possibly disturbing, but it isn't too gross. That said, just be glad this happened before it found its way to your plate!

Here's the original video, complete with the tweet "The vitality of the fish is amazing."

Uh, that's an understatement. It's not only amazing, but it will haunt your dreams and compel you to eat a salad, too.

As freaky as this is, know that the animal IS dead.

It's also not feeling any pain. It's just reacting to the sodium that's put on it and convulsing involuntarily. That might only make you feel a little better, but...it's something.

They were just so freaked out by the visual that they were thanking their lucky stars they weren't in attendance of this display.

Naturally, this sparked some pretty interesting conversations (like this one).

The truth is, fish can feel pain, but this one didn't. At least, not at this point.

Though much of the thread under the original video is in Japanese, the point was made so that someone in any language could get it.

"No. No thank you!" This isn't something people needed, but it's fascinating anyway.

People weren't about to apologize for finding the clip interesting...

...but that doesn't mean that they didn't feel a little guilty or weird about it!

By sharing it with the world, one person may have just created some vegans in the process.

That will, in turn, save some fish, and those fish owe this wriggling monstrosity their lives. It's almost poetic, isn't it?

Feel bad for the fish or don't, but marvel at what goes on inside the kitchens where REALLY fresh food is served.

All of a sudden, "fresh" doesn't sound so appetizing, does it?