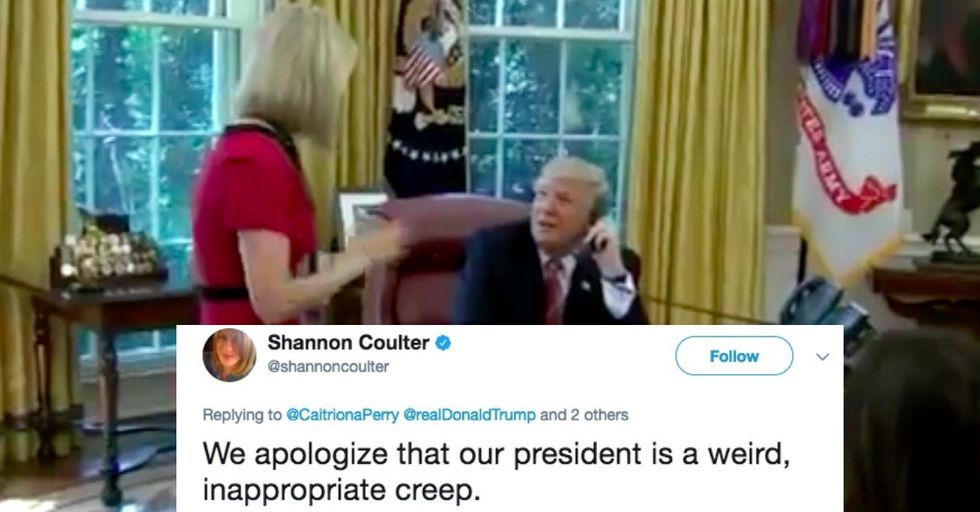 Call me crazy, but if you were the leader of the free world who has been under more fire than a five-alarm blaze for inappropriate sexual behavior, I would think the last thing you would want to do is add kindling to that fire.

President Trump apparently didn't the memo, or if he did, he was too busy flirting with journalists to give it a read.

Trump was on a phone call with Ireland's newly elected Taoiseach Leo Varadkar to congratulate him on his recent election win when he remarked, "Well, we have a lot of your Irish press watching us. They're just now leaving the room."

He then proceeded to flirt with reporter Caitriona Perry. "And where are you from? Go ahead. Come here, come here," said Trump, pointing to Perry. "We have all of this beautiful Irish press. Where are you from? RTE news? Caitriona Perry! She has a nice smile on her face, so I bet she treats you well," remarked Trump, while everyone else just kind of looked at each and politely chuckled. AWKWARD.

Perry shared a video of their encounter on Twitter afterwards, describing it as "bizarre," and Twitter agreed.

"Trump,"She has a nice smile on her face so I bet she treats you well."?Ms.Perry, please accept the apology of at least 1 female American.?"
"Here's a second apology. I couldn't understand what he said. He's on the level of a 14 yr old boy. Gross."
"And a third. He's truly deplorable."
"We apologize that our president is a weird, inappropriate creep." Of course, some defended him...

"So any man that says you're beautiful & you have a nice smile is a creep?I normally take that as a compliment.I see your minds in the gutter."

But the woman was just trying to do her job. It's not like they were at a cocktail party, not that that would make it okay either, but you get the point.

"1) it was utterly inappropriate in the work-place...they weren't on a date! 2) you could see she was uncomfortable, he relishes this power."
"there are simply no words to describe how violated I feel for her" Was it the worst thing ever? Of course not. But given his track record and continued pattern of behavior, you have to expect a reaction. And that reaction is a collective sigh and shaking of the head from the rest of the country.