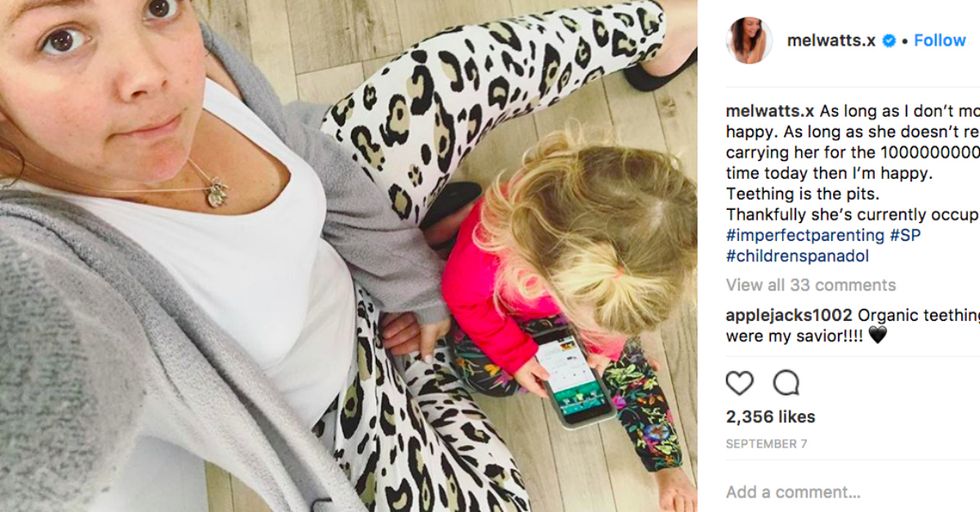 Marriage is hard. Add four kids into the mix and you've got a downright daily challenge to keep the spark alive. Australian mom and blogger Mel Watts shares her struggle. Her relationship is different than she imagined it would be, and something's got to give.

Sorry — any opportunity to quote the The Princess Bride should be taken. Marriage may be a blessed arrangement, but it's not without its challenges. Any couple worth their rings knows this.

We start with passion.

Oh yeah! Spend the rest of my life with this guy? You bet! Sign me up! But things change. We change.

Soon enough any moans from the bedroom are just as likely to be from the two of you individually releasing the day's aches and pains and finding sweet relief in simply being horizontal.

Years + kids = so so tired. Adding little ones into the mix really changes things. What was once a private island for two is suddenly a smelly, crowded chore pile.

Blogger Mel Watts is known for getting real about her life as a mom.

Watts's fans appreciate her honesty and candor where so many others paint rosy pictures of familial bliss. She doesn't hold back from posting about the mundane, the ugly, the struggle.

She'll literally show the underbelly of motherhood that others work hard to conceal.

Her social media accounts are full of this kind of raw honesty. Watts shares the sweet moments too, but she doesn't shy away from the hard stuff. So, when she posted about the changes she's noticed in her marriage, her readers were there to support her. And when she got a little TMI, they didn't mind at all.

Watts is married to Nolan, and together they are raising four kiddos in Australia.

That post was relatable to many, many people. What parents can't relate to pretending to be asleep so the other one will get up for the baby? But none of us really pictured that particular bedtime "action" early on in our relationships.

OK, so most people don't discuss their, uh, personal grooming on Facebook.

But in her signature style, Watts puts it all out there. Surprising, salacious, funny ... whatever you think of her "beaver" status, it's simply Watts being frank and honest about what's going on for her right now.

She wonders, is the passion gone forever?

Over a lifetime a relationship is bound to change. Does it change one time and for the worse? No. It's an evolution, just as the two people involved are.

Watts acknowledges that this moment in her marriage is about parenthood of young children. This moment may not be sexy or exciting. But this moment will not last forever. Her fans responded to her candor with support, commiseration, and gratitude.

Some shared that their marriages didn't make it through the rockier patches.

Every marriage changes, but not every marriage makes it. Sadly, many people were able to relate to Watts's post, but were coming from the perspective of things falling apart.

Most people responded with a resounding "ME TOO!"

People don't often share their most vulnerable thoughts and fears. But when they do, others always relate. All of us waver; all of us let things slide; all of us mourn the loss of something from earlier, simpler times.

Still more responded with wisdom from the other side of early parenthood.

Is marriage tough when you're in the trenches with little kids? Yes. Absolutely. But, for the couples who make it through, there's a light on the other side. It changes again, into something entirely new.