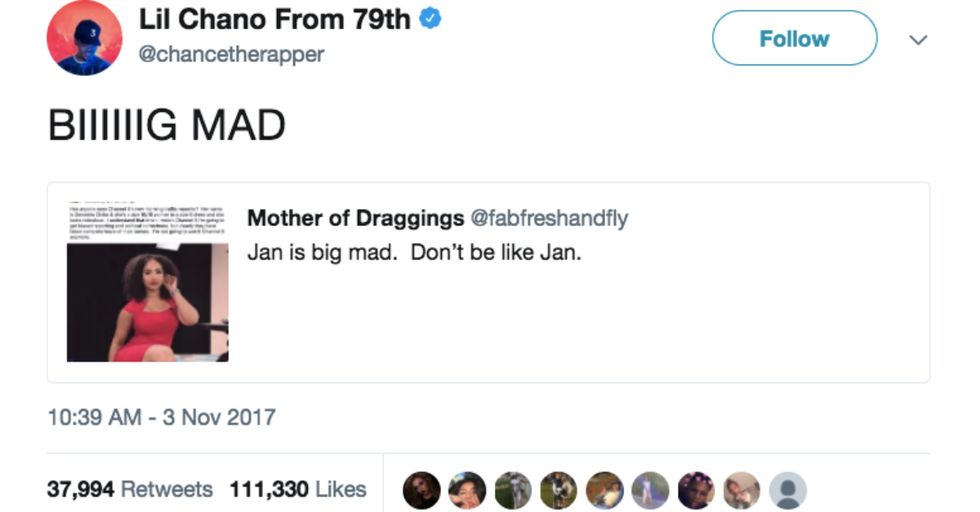 Here's a little tip that'll take you far in this era of social media draggings and internet dust-ups. Don't come for just anyone on social media, because you never know when they'll clapback... or all the people who will support them once they do. Just ask Jan Shedd, a Texas woman who posted a negative comment about Dallas' new Channel 8 traffic reporter Demetria Obilor last week.

Shedd took to social media to critique Obilor's figure in a now-deleted post.

"Has anyone seen Channel 8’s new morning traffic reporter?" Shedd asked. "Her name is Demetria Obilor & she’s a size 16/18 woman in a size six dress and she looks ridiculous." For the record, Obilor, who is mixed-race, looks amazing in ALL her dresses.

The internet outrage-mill would never have discovered this post had it not been for Twitter user Mother of Draggings.

Things took a turn for the outrageous when Chance the Rapper got involved.

"BIIIIIIG MAD," the Grammy-award winning rapper of "No Problem" and "May I Have This Dance" fame tweeted. Thousands of Twitter users quickly agreed with him, calling out Shedd for her racist remarks. Shedd refuted the claims via social media, writing, "Frankly, I didn’t even notice that she was black. I was shocked that Channel 8 would put someone on the air that dressed so provocatively."

The problem is, even if racism was not her intention, Shedd is just the latest in a long history of denigrating black women's bodies.

Take, for instance, the case of Saartjie Baartman, a native South African known as the "Hottentot Venus," who was paraded across Europe as a circus freak in the 19th-century because of her large posterior. From time immemorial, women of color, particularly black women, have been consistently scrutinized and body-policed, even as their physical attributes are seen as desirable on women of other ethnicities. What is "hot" on the Kim Kardashians and Iggy Azaleas of this world is often seen as "ghetto" on women of color.

Still, Obilor isn't mad though. She recently shared a graceful reply to both her haters and her fans

Then again, this isn't the first time Obilor has had to face the trolls. In May, Obilor shared a racist email that she had received from one of her viewers. “I want people to understand what it’s like simply being who you are when you’re black," Obilor told Yahoo. “Some people have the audacity to say things like ‘racism doesn’t exist anymore,’ but that email was a prime example [that it does]." Don't let the haters keep you down, girl.