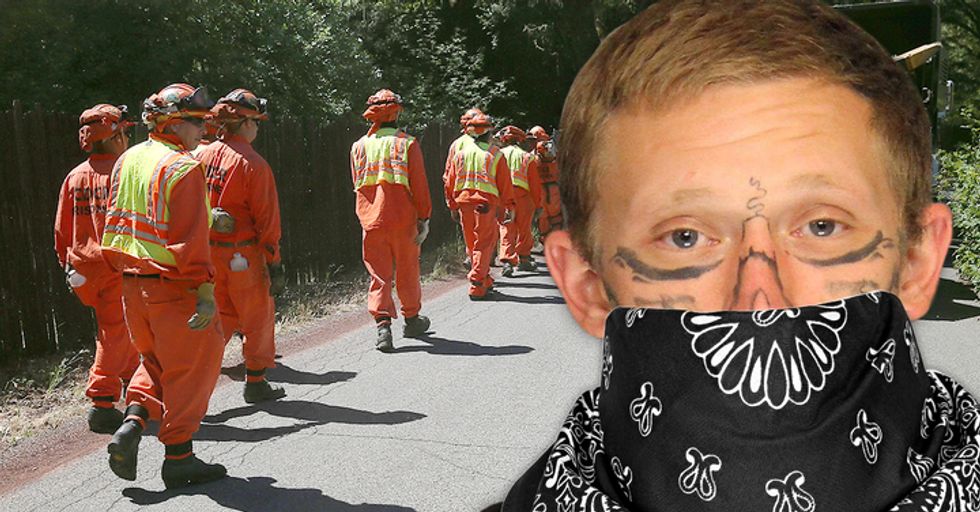 27-year-old Corey Hughes was serving time on a weapons charge when he escaped from prison. KTVU2 News posted an alert on their Facebook page that said that the man was wanted and last seen in a work crew in Stockon, California.

The post now has over 20,000 shares and 5,000 comments, but not because of the crimes the man committed.

This is the photo that KTVU posted on Monday.

Could his tattoo idea have stemmed from a love of Halloween?

Jesse Littlejohn thought so. They commented, "Tattoo artist: What do you want? Corey: Halloween Fo LIFE!!!

Mike Thompson sent out a warning.

He said, "Could be wearing a disguise so watch out." It's totally possible. You've gotta stay alert, folks.

People threw some major shade at the way Corey's mugshot came out.

Sal Mariscal wrote, "Hi my name is Corey. I’m a 27 year old single guy. I just left my job to pursue a different career. My hobbies include tattoos, running and I especially love the outdoors. I’m sorry for the quality of the photo attached I had a friend take it for me. CHEERS!" Corey Tole didn't even want to be associated with this fellow Corey. He said, "As a representative of the collective Coreys or Corys, we hereby revoke this particular Corey's status and claim no affiliation within our ranks. Thank you."

Where is Corey now?

"If he only had some distinguishing characteristics like a scar, a birthmark or a mole... could help to catch him," Johnathan Lucero pondered. Jay Walther editorialized on what he thought was going on over the police radio: "Dispatch: "Be on the lookout for a white male, 6 foot...Umm you know what...the guy has frickin' skull tattoo over his entire face, find him." People seriously could not stop commenting on this post.

We feel a little bad about it, but we still can't stop laughing.

Claire Morgan-Denger felt the same way. She said, "I'm just here reading through the comments and laughing. Maybe I shouldn't be laughing but I just can't help it!" "I myself am drawn to the “squiggle" he has between the brow....almost as if he was attempting to shade a new Skeltor nose and just said F-it....squiggle wiggle and called it a day," Stacey Frost decided.

"Breaking news.... He's believed to have an accomplice in the escape.... a one Mr. Jack Skellington. Be on the lookout for the pair. Possibly headed to Christmastown!

?" he said. "Tattoo Artist: what do you like? Him: I like skeletons but if you just want to smear a wet piece of coal on my face that’d be cool too. Tattoo Artist: Say no more," Alex Sadie commented. Hey, if the man likes skeletons, let him look like a skeleton.

Some nice people out there on the Internet felt empathy for Corey and his situation and thought that we shouldn't be judging him.

Carla Swartz showed some sympathy. She said,"What if this was done to him, and not a choice? Look again. I don't know anything about him, but I still feel bad for him. That face is full of sadness either way." But Stephanie Spinola thought we should get off his back for another reason. She wrote, "Let him go, he's a hot mess. Arrest the tattoo artist, that face tat is criminal."

Some other silly Internet folks thought that we shouldn't be rude towards him, but for different reasons.

Radolph  Scott said, "I refuse to say anything derogatory for fear he could come after me. Afterall, he still is out there loose!

?" Andrea Sjosten mused, "I kind of feel compassion towards this guy because of what he went through in his life to end up like this. But I am also a lil stoned."

Heather and Jose's comments might take the cake for really being out of the box.

Jose Delacruz teased, "All of you are going to feel pretty silly when he finds a sharpie and paint a beard and sunglasses on his face. No one will ever recognize him." Heather Mendoza suggested that maybe Corey has been meticulously planning to fool us all in a mind-blowing hoax. She speculated,  "Maybe he's spent the entire length of his criminal career waking up early to draw this on and the jokes on all us when everyone is looking for skeletor [sic] but in reality he's totally tattoo free."