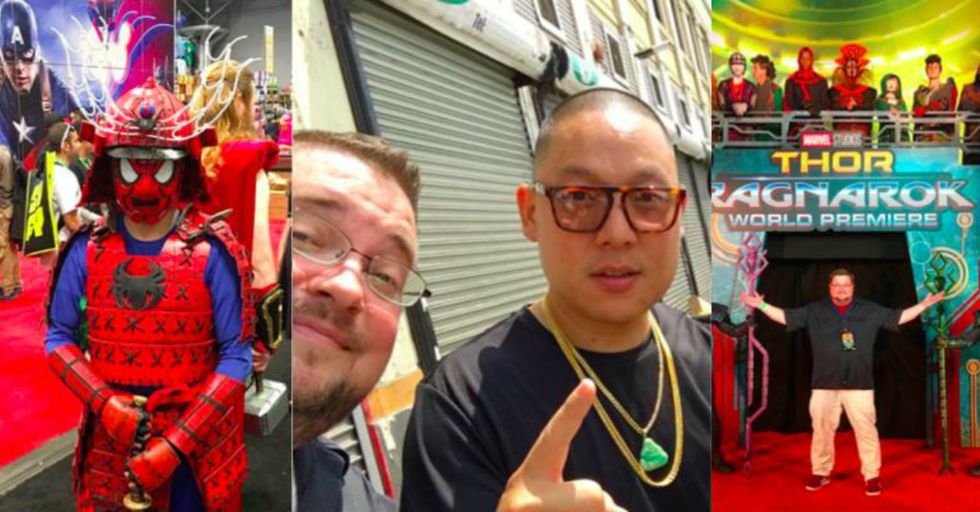 Marvel is, without a doubt, more than just a comic book company. They're a titan of pop culture, churning out hit movie after movie, along with the top-selling comic books in the entire world. It doesn't even matter if you're into comic books. Everybody knows Marvel.

Well, our beloved company just hired a white dude as their Editor-in-Chief. Which, no surprises there. One major thing though: for years, this guy wrote under a Japanese pseudonym.

Cebulski is known for bringing to light unique and diverse voices. He's a writer and editor and pretty well known in the Marvel-sphere.

When news dropped that Cebulski had been promoted, it was really exciting.

But it also brought along with it a rumor that'd been circulating for quite some time: that Cebulski spent time writing under a Japanese pseudonym.

Ummm, it's pretty obvious that Cebulski is not Japanese.

Like, at all. And this week he finally decided to address the rumors that he wrote as "Akira Yoshida". Turns out that yes, this white man had a Japanese pen-name.

Cebulski explained his reasoning for adopting the name Akira Yoshida when writing.

So a white Marvel writer was a fake Japanese writer named Akira Yoshida? That's the name of the most popular Anime… https://t.co/FwbxRQczCH
— Seanbaby (@Seanbaby)1511796559.0

He told Bleeding Cool that the reason he decided to write under this name was so he could pivot away from his editing job. He wanted to transition into a full time writing position within the company, pursuing his true passion.

Which, yeah, we all have dreams we hope to achieve but most of us don't pretend to be another race while going after them?

“I stopped writing under the pseudonym Akira Yoshida after about a year. It wasn’t transparent, but it taught me a lot about writing, communication and pressure. I was young and naïve and had a lot to learn back then," he said in a statement. One has to wonder that if "it wasn't transparent" means that it simply wasn't...true. It doesn't stop there...

He went on to talk about how this is all "old news" now.

"But this is all old news that has been dealt with, and now as Marvel’s new Editor-in-Chief, I’m turning a new page and am excited to start sharing all my Marvel experiences with up and coming talent around the globe," he explained.  The odd thing about all of this is that there have been multiple people who claimed that Yoshida was a real person.

Cebulski himself has even said that he's seen Yoshida around the offices.

Ummm, did he pass a mirror? At no point did Cebulski ever allude to the fact that he was just talking about himself. He completely made it seem like there was an actual, other person.

Here's the thing; since 2004, "Akira Yoshida" has been listed on Marvel's website as a writer.

His credits include Thor: Son of Asgard and X-Men: Kitty Pride-Shadow & Flame. "Yoshida" also gave interviews, talking about how he grew up in Japan and discussing his work and life.

"Yoshida" also explained that he learned English through the American comic books his father would bring home from business trips.

Except none of that is true, since Cebulski is... once again... a white man. He explained that he created the idea for a pen-name because at the time, if you were in a different department you could not submit to write for Marvel. So, as an editor, he technically couldn't be a writer.

The only way one could do so was to get approval.

And the request would only be approved if the employee's pay wouldn't be exceeded. Cebulski explains that he told Marvel the truth earlier in the year. He had plans to pitch ideas to other companies under Yoshida's name. Because Cebulski decided to come clean, Marvel kept the decision to make him Editor-in-Chief, despite the fact that he broke the rules in order to get his writing published. He also, you know, assumed the identity of someone who was Japanese, and that's pretty disturbing. Marvel editor and head of character development Sana Amanat came to Cebulski's defense, saying that, "That man has lived in Japan, speaks Japanese, and has lived all over the world. He very much associates with Japanese culture. And I think that him writing, for whatever time it was, was him trying to be a writer more than anything else." Let's hope so.