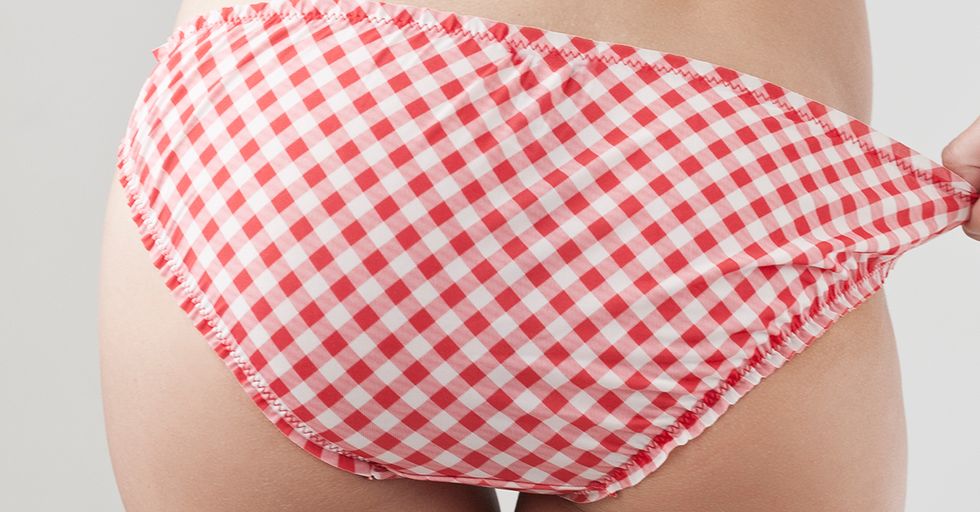 Gather 'round, everyone. I'm going to share a story that will make you laugh, and cringe, and be so, so thankful that it didn't happen to you.

When you're in a relationship, it's pretty normal to exchange gifts with your significant other. For most people, that might mean getting them a copy of your favorite book, or maybe buying a random object you came across that made you think of them.

But some people take things to another level and choose to get their significant other a novelty item that toes the line between "silly" and "sexy." You know, like fuzzy handcuffs. Or, as in the case of today's story, a pair of singing underwear. Now, you might be thinking: "Who would buy someone singing underwear? There are so many ways that could go wrong!"

And, well, my friend, you're exactly right about that.

You may want to put down your coffee before reading ahead.

I now present to you the tragically hilarious tale of The Surprise Singing Underwear. (Read at your own risk.)

Our story comes from a woman who received singing underwear from a boyfriend.

The two eventually broke up, but for whatever reason (which I'm sure she's regretting now), she kept the underwear. And she wore them to work one day.

What happened, you ask? Well...you'll see.

As it turns out, the "Wild Thing" emblazoned across the crotch wasn't just for decoration. It was essentially a track listing.

Just take a second to picture this scenario.

I've experienced a lot of things that the dentist, but I can say with 100 percent confidence that I've never experienced anything quite as...erm, wild as the dulcet tones of The Troggs' No. 1 hit blaring from my dental hygienist's crotch.

She tried her best to play it off.

She said it was a ringtone. Is anyone else blushing uncontrollably? My heart is racing while imagining this whole situation.

I admire her quick thinking. However, I highly doubt either the patient or the dentist believed the explanation.

She ran into the bathroom and ripped the offending underwear off.

I like to imagine that the underwear continued their performance from inside the dentist office trashcan, serenading anyone else who visited the facilities throughout the day.

But for real, this story is wrecking me.

I've been embarrassed plenty of times! But somehow, none of those stories are quite as bad as this one.

And that was the end of that pair of underwear.

Imagine the most embarrassing thing that could happen involving underwear. There are so many things! But none of them are quite as bad as your unmentionables breaking out into song.

This story makes me want to curl up in a corner.

Imagine having to walk back into the room with the patient and the dentist and just be like, "Oh yeah, that ringtone won't be bothering us again. Also, it was definitely a ringtone and definitely not a pair of underwear that randomly started singing. Because that would be so weird, right?"

At least she can laugh at it now, though.

And I suppose that in the grand scheme of things, it could have been way worse. I'm not exactly sure how, though.

Kudos to this woman for sharing her story!

I love that she can look back and laugh. And that she's willing to share it with others to make them laugh, too!

She closed her story with a message for the ex-boyfriend.

If you're reading this story and thinking, "Wow! I should buy my significant other some singing underwear!" you have received the wrong message. Do not do that.

Because this is the Internet, there were plenty of people who doubted the story.

But the woman at the center of it couldn't care less. She knows what happened. She heard it with her own ears!

Plenty of people asked why she didn't realize the underwear sang.

Come on, people. Think about it for a sec. Out of all the many pairs of underwear you have in your drawer, how many of them sing? Why would you assume they would start singing?

Also, it's not like the underwear had gigantic speakers attached to them.

There, uh, wasn't a lot of material involved in the production of these particular undies.

Although they did have oddly thick seams, apparently.

But even that didn't stand out to her as she put the underwear on. Because why would it?! As far as she knew, she was putting on a pair of regular (if somewhat wildly decorated) underwear!

This person had a pretty good point:

Are you supposed to wash this underwear that contains, like, electronics?! Or are they more a one-time-only sort of deal?

Regardless, you'll never be able to hear the song the same way again.

I'm pretty sure I will start laughing every time I hear "Wild Thing" for the rest of my life now. People will ask why I'm laughing and I'll have to explain I'm just thinking about singing underwear. This person also wanted to offer kudos on the ringtone explanation.

Luckily, this whole thing went down when cell phones were around.

Can you imagine how awful it would have been in the time before cell phones, though?! Just thinking about it kind of giving me heart palpitations.

People started sharing their own stories of unfortunately musical clothing.

And honestly? This one may be worse! I can't decide. Both are very, very bad.

And this woman had her own embarrassing underwear story:

She was staying in the hospital for a while due to issues after having a c-section.

She asked her husband to pack her a bag.

She even requested her black pregnancy underwear that wouldn't irritate her wound. Well, things didn't go according to plan.

The underwear were black...

But they also happened to have the words "I'm sexy and you know it!" on them. Nice work, husband. Great job.

Overall, Twitter was thrilled with the thread of embarassing underwear stories.

And how could you not be? At the very least, you can be glad these things didn't happen to you!

We also all learned a very valuable lesson, today.

Some people also wanted the original patient to show up and tell his side of the story.

For all we know, he probably regales his friends with the time his dental hygienist's crotch started serenading him in the middle of a cleaning!

The woman in the story was game to hear from him, too.

Alas, he has not shown up to the thread yet. But we'll keep ya posted! Share this with someone who could use a laugh today!