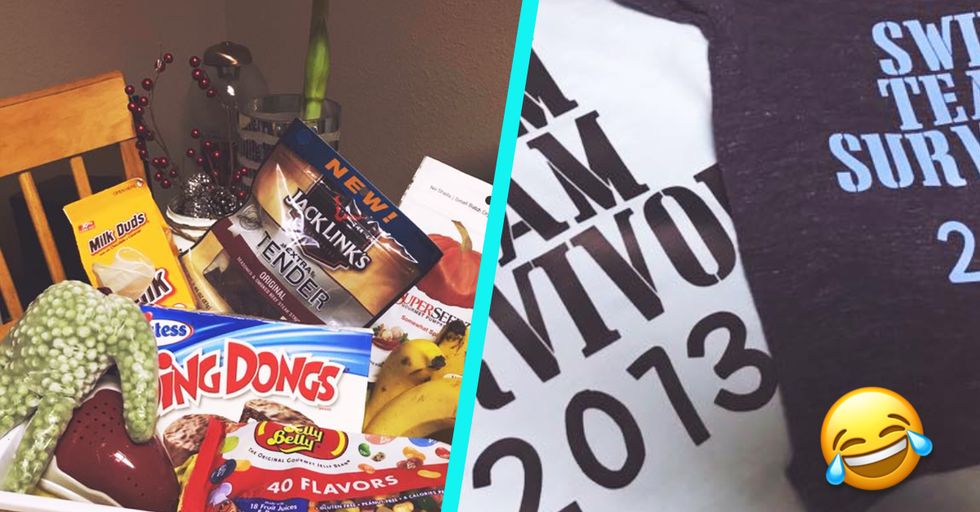 There's a party for every occasion. Birthdays, graduations, anniversaries — you name it, we can celebrate it.

But this might be the very first vasectomy party we've ever seen. And we're not mad about it. In fact, it's the opposite. We love it! It's hysterical. This wife had a perfect sense of humor about her husband's particularly tender surgical procedure and threw him the world's greatest (and maybe first) vasectomy party ever.

This is Kimberly and Jason Hemperly, along with their adorable little daughter.

The happy couple has been building their perfect little family for the past few years, and they basically hit the jackpot.

They now have two little kids.

And what adorable little kids they are! With one son and one daughter, the Hemperly family decided they had reached their perfect size. And that meant one thing...

It was time for dad to get snipped.

In order to make sure their family stayed as perfect and planned as possible, dad Jason decided to undergo a vasectomy.

Kimberly was so appreciative of her husband's...sacrifice...that she threw him a vasectomy party.

And oh my goodness the pictures are hilarious. They called it "Balls Voyage," and we bet you can guess the theme. (It's genitals.)

The Hemperlys' "Balls Voyage" party had everything...

There were on-theme snacks, family t-shirts, and an appropriately somber cake mourning the loss of, well, you know. Let's take a closer look at this incredible spread...

All the snacks were hilariously on point.

The sperm cake came complete with a tombstone.

That cake is extra impressive because even though it's covered in sperm, we somehow still want to eat it. What does that say about us?

This party snack is kind of hard to see, but once you figure it out, you'll definitely let out a little giggle.

It's meatballs and tiny hot dogs! Hey, when life snips off a couple of balls, might as well just bake a few more in the oven.

Jason even posed with their two adorable kids in matching t-shirts.

His says "Time to Retire the Swim Team" and while he's got a sad look on his face right now, we bet that he won't be upset about this for long.

Let's take a closer look at the kids' adorable tees:

These two are quite special! They're the only ones who survived the "swim teams" of 2013 and 2017. Obviously, the Hemperlys' party went totally viral! The Internet had some very strong reactions...

Many tagged their own partners in an attempt to persuade...

This is a mighty tempting offer. Perhaps your vasectomy party would also go viral and catch you more than 45,000 shares and 10,000 likes.

Others skipped the suggestion and went right for the threats:

While we don't condone forcing anyone to undergo a procedure like this, we can't deny that a party of this caliber might sweeten the deal a little bit.

Pretty much every person in the comments tagged someone who they wanted to share it with...

Or they expressed just how awesome and hilarious they thought this party was. Top notch food- and t-shirt-based jokes... Who could ask for anything more?

If you think about it, a vasectomy is really a time to send condolences...

It is a loss, after all. But the newest best way to laugh off a tough procedure is with a pun-filled party! And we know this thanks to the Hemperly family.

Our personal favorite comment is the sincere congratulations this Leeds woman sent to the Hemperlys:

"Really happy for you all." Sounds like this person is maybe a little bit jealous...or feels a sort of longing...or regret. We want to know more! Here's to parties for every occasion and Milk Duds puns (because come on, that's awesome).