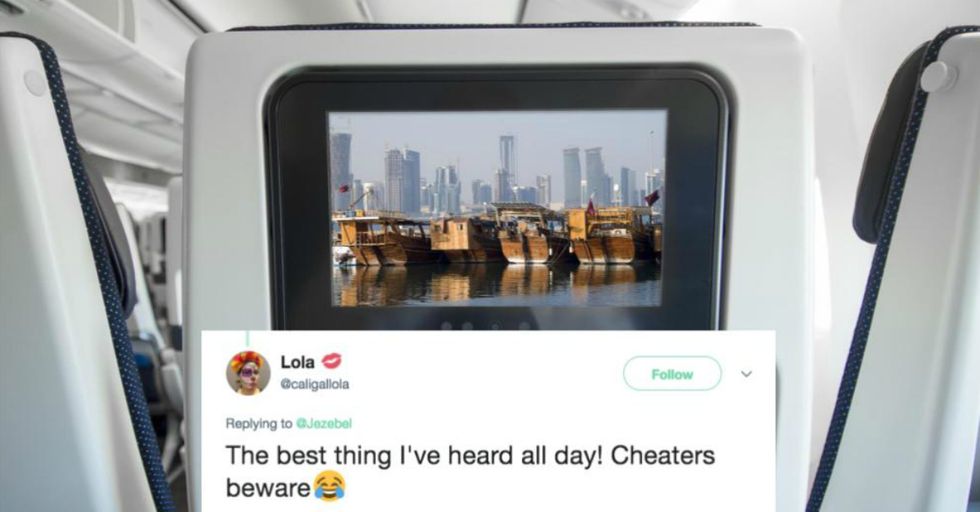 There are a lot things to worry about when you step onto a plane. Will you get a window seat or be stuck in the middle seat between two complete strangers, both of whom laid early claim to the armrest? Will the plane take off on time or will an unexplained delay keep you parked on the tarmac, playing Candy Crush and praying to whichever aviation gods are in charge of air traffic control? Will they run out of coffee by the time the cart gets to your seat in the very last row? But one thing you rarely have to worry about after the cabin door has been closed is whether your plane will have to make an unscheduled landing mid-flight because a woman attacked her husband after she found out he was having an affair. That is, unless you happened to be on this recent Qatar Airways flight.

A couple was headed to Bali when their vacation took an unexpected turn.

They boarded a plane in Doha, Qatar, to Bali, Indonesia. Soon after takeoff the husband fell asleep, in what would turn out to be his second mistake. His wife, presumably seeing her opportunity, used his unconscious state to her advantage. She took his phone and then, undeterred by the need for a passcode, used his finger to unlock the screen.

After unlocking the phone, the wife scrolled through her husband’s messages, where she discovered he’d been having an affair.

After the cat was out of the bag, things escalated quickly. The woman, who was described by the Times of India as “a few drinks in" but was also, let’s face it, rightfully enraged, began hitting her still-sleeping husband.

The husband woke up, and the shouting began.

The couple started shouting and when the crew couldn’t calm them down, the pilot took matters into their own hands. The flight made an emergency landing in Chennai, India, still a good five and a half hours from Bali, and the couple was kicked off.

After the couple was removed from the flight, the plane took off once again, leaving the couple behind in India.

The rest of the passengers continued on to Bali and the couple was sent back to Doha, on what likely rivaled Southwest’s new flights that feature live music for the most uncomfortable flight ever. Clearly the husband was the one in the wrong here, but maybe for everyone's benefit it's time to add iPhone sleuthing, along with having bare feet and eating tuna fish sandwiches, to the list of things that are better done on the ground.

Honestly where to even begin with this?

We're both appalled and kind of.... proud? This woman went full Harriet the Spy on her husband. And we weren't the only ones you had feelings about it.