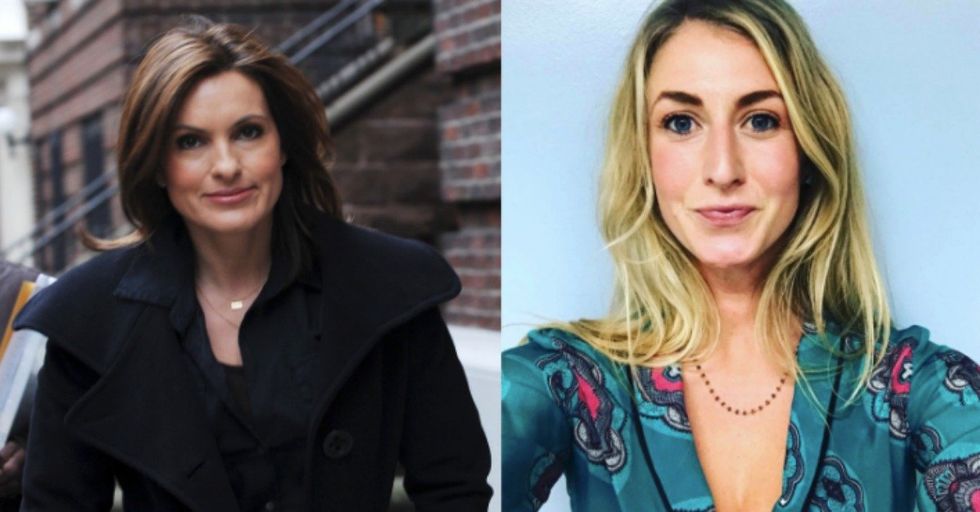 We all have that one friend who suckers us into watching hours on hours of Law and Order reruns. You get drawn in watching detective Olivia Benson kick the patriarchy's butt or lawyer Jack McCoy deliver pointed and snappy arguments against criminals, but suddenly, hours have passed and you're coming out of your crime-fighting marathon blurry-eyed, crime-aware, longing for pizza rolls (is that just us?), and feeling as knowledgeable as QWEEN Ruth Bader Ginsburg about the fickle, crime-infested world we live in...

...all the while having no actual training on police or legal procedures.

Haters will tell you that your newfound knowledge isn't legit. And to that, you can serve them the cold hard FACT that watching Law & Order saved a woman's life.

This is how we feel after a Law and Order marathon.

We used to think the show only gave us a false sense of confidence in our crime-fighting skills, but apparently watching the show can have some real, tangible benefits.

At least, it did for one California woman.

In the criminal justice system, the people are represented by two separate yet equally important groups: The police, who investigate crime, and the district attorneys, who prosecute the offenders.  Here is one story. **Dun-Dun**

Julie is a 32-year-old Oakland resident who works in public relations for a video game company. Last week, she was riding the BART train alone, going north from Daly City.

Suddenly, someone dropped a threatening note in her lap.

She didn't see who gave her the note, but according to its message, the assailant was standing right behind her. The sinister note said that there were two guns pointed at her...

...and demanded that she give her wallet to the person behind her without turning around.

The note said, "There are 2 guns pointed at you now. If you want to live, hand back your wallet and phone NOW and do not turn around and be descreet (sic). Do not turn around until after you have left civic center and you will live." The note called for her to hand over her wallet and get off of the train at the Civic Center station if she wanted to survive. According to the SF Chronicle, Julie said it was the most scared she had ever been in her life. But suddenly, she had a brilliant idea...

She wanted to get help without tipping off the attacker, since he had just threatened to kill her if she turned around.

Julie told SF Chronicle, "I did not want to give up my stuff, but I had no idea who was behind me." She tried getting the attention of the people around her by mouthing "help me", but no one noticed. At a loss for what to do, she suddenly remembered a pivotal episode of Law and Order...

Julie said that her rule is to give up her belongings in the case of a mugging in order to remain safe, but she thought she had a good chance of getting help since she was surrounded by people.

So she bravely tried a tactic that she had seen once on an episode of Law and Order. She said she fell on her side, closed her eyes, and thrashed wildly, attempting to fake a seizure.

Thankfully, this attempt to get attention from other passengers worked better than the last and passengers started flocking to her side to see if she was okay.

That's when she passed them the threatening note, all the while keeping up her fake display.

The passengers quickly found out that she wasn't in physical distress but instead was caught in a tense, life-or-death situation.

In the confusion caused by Julie's quick-thinking move, the attacker slipped away and out of sight.

Police searched the Civic Center station, where the attacker had told Julie to exit the train, but they didn't find anyone that fit the description of the man...

Officials are reviewing the security footage for the train that Julie was on, but have not yet found a suspect.

Julie thought the burglar may have been an older woman carrying a suitcase. According to SF Chronicle, she decided that she will not to press charges if the person is found. She would rather put the whole thing behind her and move on.

Girl, you do you.

You got out of a dangerous situation intact, without giving up your belongings or getting hurt. It's impressive that she was able to think and act quickly under a lot of stress.

Because we have proof that it could save our lives. Sitting on the couch and watching Olivia Benson is more than just a hobby. Just let us have this, mkay?