This Woman Just Gave Birth to Three Babies, All Within One Month | 22 Words 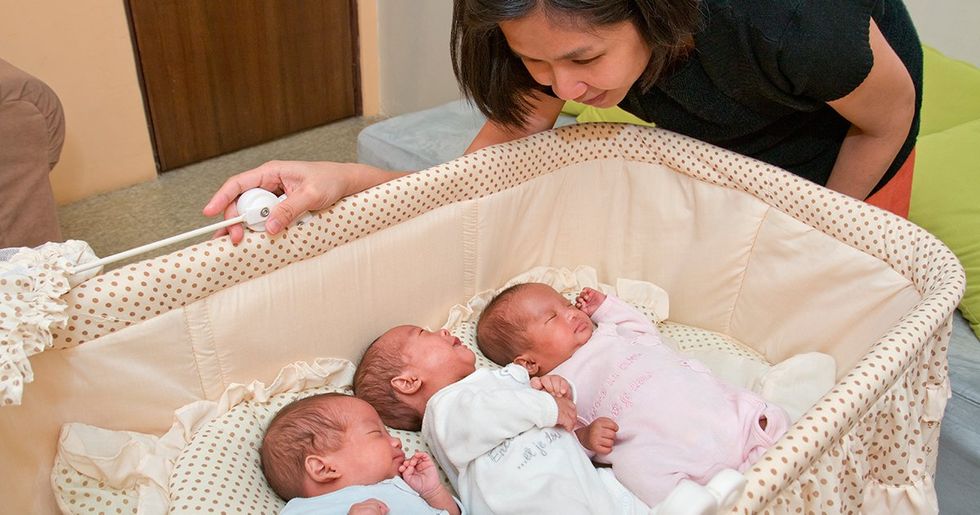 This Woman Just Gave Birth to Three Babies, All Within One Month

No, they weren't triplets.

File this one into "news that sounds so painful it actually physically hurts to read." I'm pretty sure my future children will feel this story... that is if I decide to even have kids after learning about this as a possibility. I imagine reading this story for women is akin to a man watching another guy get hit in the balls. It's just like a lot of auxiliary pain.

But women, fear not, because it's a bit of a one in a million story -- and if those numbers still seem kind of high, you're absolutely right. Next time your partner calls you one in a million, just start yelling at them and don't explain why. That solves all my problems.

So if you're thinking to yourself, "could this ever happen to me?" the answer is yes. And I'll tell you exactly how. In every terrifying detail.

Let's start at the very beginning.

Our hero's name is Arifa Sultana, a 20-year-old(!) Bangladeshi woman.

She's 20 years old and she has three children.

I remember when I was in my teens I thought I would maybe have kids by the time I was 24 and people still thought that was way too early. (I'm 25 now, and boy aren't kids stupid?)

She gave birth to twins only 26 days after delivering her first child.

I've heard of Irish twins, but this is a whole new ballgame, folks.

First of all, it's bad enough that she had two deliveries within like four weeks, but she ALSO was carrying twins.

Three babies. Four weeks. What's next? A dog and a couple of cats to really round out the family? She just really wanted to get it all out of the way so she never had to do it again?

I'd imagine having children this way is akin to shopping at Costco.

You go through excruciating pain for way too long, get all your shopping out of the way early, so you never have to go shopping for toilet paper ever again, and you buy in bulk to get it at a discount. That's all this is. Just a nightmarish Costco hellscape.

Arifa started out with a pretty chill pregnancy.

Everything was going smoothly, and she gave birth to a beautiful baby boy in lFebruaryuary.

She had a chill gynecologist, a super normal birth, and she and her son were released from the hospital after a successful delivery.

Sounds like a modern-day success story if I've ever heard one.

But you're not here to hear about normal births.

And to be honest, I'm not here to write about normal births. That would be super boring.

Less than four weeks later, she was readmitted to the hospital.

You might be thinking to yourself... how on earth did this woman have triplets where one of the babies was born super early?

And that's a perfectly logical line of thinking.

But oh, you sweet summer child, are you so, so wrong.

Arifa checked back into the hospital complaining of lower abdominal pain.

Maybe some complications from birth? Maybe a ruptured appendix? Maybe she just hit ab day a little too hard. We've all been there.

Are we still allowed to make that reference, or is it super dated at this point?

The doctors decided it was best to take an ultrasound to find out what was really going on.

And of course, unbeknownst to everyone, they saw she was pregnant with twins.

Now I'm about ready to say that the Virgin Mary has come back to earth, but really the explanation is much simpler than that.

My boss is telling me that it's not some awesome X-Men mutation like I had originally thought.

Sultana was born with two uteruses.

Uteruses? Uteri? Someone help me, this is uncharted territory.

She had her first child, and then from a separate conception, she grew twins in a second uterus.

That's freaking nuts. Can you imagine going home with your new child and being like, "hold on a minute, something's not quite right here, I'm still craving pickle juice and also I'm still huge".

You might be thinking to yourself, "self, how the heck did no one notice this????"

You're nailing the questions today, by the way. Kudos.

And you're right to be curious. I wondered the same thing.

Aren't there like... checkups and tests and doctors visits and weird mommy and me classes with yogis that are supposed to prevent these kinds of surprises?

Well, sadly she never had an ultrasound before her first delivery.

So no one noticed that she had three kids in the oven.

She must have thought she was growing a full on adult in there.

And to be fair, with a trenchcoat, The Little Rascals have taught us that she might as well have been.

"It is not very common to have two uteruses. When the uterus develops, it comes from two tubes, and those tubes fuse together. For some women, the fusion does not occur, and the dividing wall does not dissolve."

So each of her fallopian tubes were attached to their own separate uteruses.

They don't teach you that one in 6th-grade health class!

At least we can all rest easy knowing there's no possibility of people walking about with three uteruses.

Because three births in two months would be way too much. That's like world-ending-we-need-to-repopulate stuff.

The twins were delivered via C-section.

Because seriously fuck having two deliveries in a month. That would be... a mess.

"All three children are safe and healthy," Poddar said. "The mother is also fine."

Except for the absolute trauma of having to go into labor twice in a month, but you know, other than that she's fine.

And just in case you're worried this could happen to you...

Because, even though I'm a man, now I'm kind of worried too.

According to the National Institutes of Health, "a uterus didelphys is a rare congenital abnormality, and the occurrence of twin gestation has an overall incidence rate of 1 in a million."

One in a million is way too small of odds. That means there's like 10 women in New York walking around with Uterus Didelphys. No thank you.

At least if you do find out you have uterus didelphys, you'll find out well before your second delivery in a month.

This was only down to the consequence of Arifa Sultana not having an ultrasound before giving birth which would just be some real back-country shit to do in the US.

At first, I was like, "that seems kind of rude to people from Bangladesh," but now I'm not sure what to think because I'm just all around terrified.