This Woman Got a Very Surprising Uber Driver, and the Internet Is Obsessed With Their Story | 22 Words 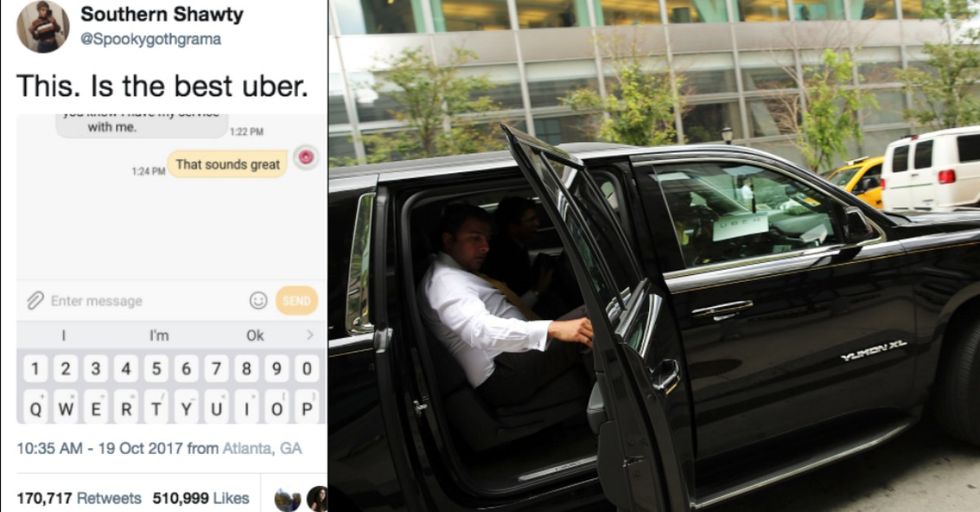 This Woman Got a Very Surprising Uber Driver, and the Internet Is Obsessed With Their Story

If you've used ride-share services regularly, you've probably met a plethora of different driver personalities. There's the chatty driver who tells you too much personal information, the inquisitive one who wants to know your whole life story, the wise driver who gives you great life advice at 2am, the talkative driver who gives you unwarranted life advice at 2pm, the promoter who tells you which clubs and restaurants you should check out, and the silent driver who only exchanges only strictly necessary information.

Twitter user @spookygothgrama got an Uber driver unlike any she had ever received — and she was extremely pleasantly surprised.

It all started when she received an unexpected text from her Uber driver.

The text said, "Hello! this is your Uber driver. I just wanted to let you know I have my service dog with me." @spookygothgrama replied, "That sounds great."

Lo and behold, the car pulled up with a sweet, fluffy, little pup peeking over the passenger-side seat.

The results were cuter than we could have imagined. The little guy looks like he's asking the passenger if she's doing okay. Does she need any water or snacks? Do they need to charge their phone?

The original tweet has over 170,000 retweets and over 500,000 likes. She didn't expect the tweet to be so popular, but Twitter was just head over heels for the little dog! Even this response to the tweet has over 4,000 likes. People were very enthusiastic about the little dog companion and jealous that they didn't get a similar one during their ride-sharing adventures.

Many commenters said they would have given the driver five stars for the companion dog alone.

The now-famous pooch's name is Bullet and he is apparently a Pomsky, which is a mix between a Pomeranian and a husky. It looks like he is also instant BFFs with anyone he meets.

Bullet is a service dog, so he's on the job while he's riding with his owner.

The only great tragedy of this situation is that no one can pet the cute dog because it is on the job. It's awesome that he can spread joy just by existing, though. We're crossing our fingers that we get to meet a dog like Bullet on our next ride-share trip. Do you have any crazy ride-sharing stories? Let us know in the comments!