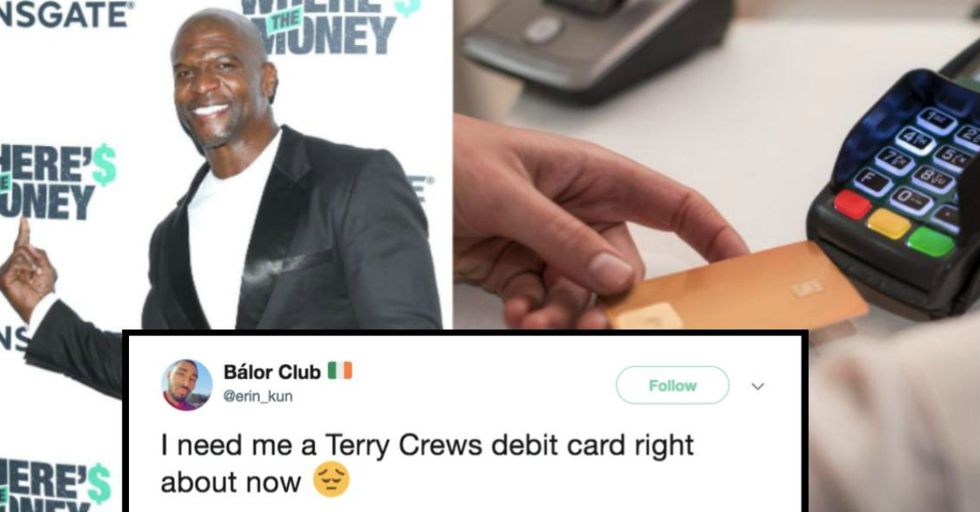 Terry Crews is swiftly becoming a Twitter hero... and a feminist one. He made headlines last month when he revealed that he had been groped by a Hollywood executive, but had not retaliated for fear of the repercussions. "Who’s going 2 believe you?" Crews wrote, answering, "(few) What r the repercussions? (many) Do u want 2 work again? (Yes) R you prepared 2b ostracized?(No)."

Crews also noted that if he had retaliated, "240 lbs. Black Man stomps out Hollywood Honcho’ would be the headline the next day." Now Crews is back in the social media spotlight again, this time for a much more delightful reason.

Twitter user Darrel Kennedy @DarrelKennedy was trying to save more money with her new debit card, so she came up with a novel solution.

She would customize her Wells Fargo debit card with a picture of Terry Crews as his Everybody Hates Chris character, Julius Rock, the extremely frugal patriarch of the Rock family.

Julius is a legend among TV cheapskates.

He always knew the price of everything, and could calculate the most obscure things down to the penny. For example, in the pilot episode, he tells Chris, "Unplug that clock boy. You can't tell time while you sleep! It's 2 cents an hour!"

Which was why Kennedy thought a picture of Julius would be the perfect reminder to keep her from spending too much money.

Unfortunately, Wells Fargo was not so easily convinced. They told her she would need written permission from Crews in order to use his image.

Kennedy wasn't deterred. Instead, she did what every responsible Twitter user does.

She tweeted out a plea, asking for help with reaching the penny-pinching godfather himself. Within moments, Twitter went to work.

The very same day, Crews reached out to her via Twitter.

He'd given her penny-saving efforts the Julius Rock stamp of approval. Kennedy was thrilled, and so was the rest of Twitter, which quickly got on board with the money-saving scheme. Of course, Kennedy isn't the first person to use Julius Rock as money-saving inspiration. Last year, another Twitter user Daniel Cabral put a picture of Julius in his wallet to remind him not to waste money on useless expenditures.