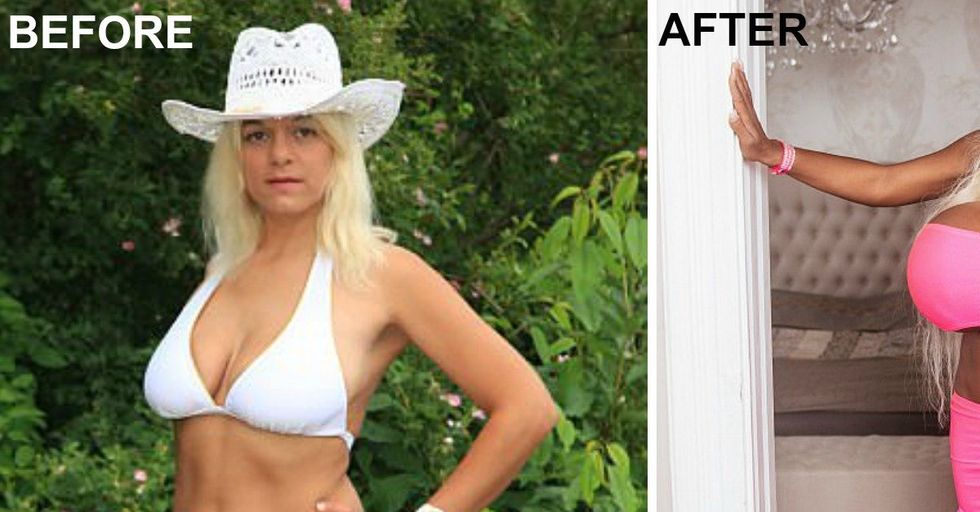 Meet Martina Big, the German woman who has more than $50,000 on surgeries to transform herself into "Exotic Barbie."

“At first, I wanted to look like Pamela Anderson or Katie Price," she told The Daily Mail. "But now, I realize that is not for me. These women are not curvy enough!"

"And so now, I am more inspired by Barbie or Jessica Rabbit but I go my own way and am creating my own extreme look," she added.

That's putting it mildly, because as her surname suggests, there’s one part of Martina’s body that’s slightly, well, bigger than your average human. Are you ready for this?

Martina’s 32 S breasts are so huge, she claims they’re the "biggest in Europe."

She has a special kind of breast implants that can be "pumped up" more and more by injecting saline into them — and she says she plans to spend even more money on elective surgeries, despite her already VERY extreme body modifications.

"I was not expecting to go so dark but it worked so well," she said. "I love it and I really want to push it to the extreme. Now I just want to get darker and darker and see what the limits are."

She previously said she loves the contrast of her bright blonde hair and her "dark, crispy brown skin," as well as the surprised reactions she gets from people on the street.

"Yes, I have the skin of an African girl,' she said. "But I am not pretending to be a black girl. I'm going to create a unique and exotic Barbie with dark tan, bright blonde hair and exaggerated curves. I like this look."

At first, it was just breast augmentation and lip injections, but before long Martina was truly addicted to modifying her body in extreme ways. She became singularly focused on tanning, eventually saying that she wanted to become an African woman. She now plans to get butt implants as well.

"At first, my fans were irritated saying, 'Why did you do this?!' but that is because they have never seen a white girl change her skin to African dark before," she said.

Per Martina, "But now, they have got used to it, they are excited like me. They say, 'Oh, I like your style! Go darker! Go darker!'''

Martina now claims she has actually changed her race.

You can see her for yourself on the UK talk show This Morning.

Boyfriend Michael, who has had tanning injections himself, said, "It is a great feeling for me to have Martina by my side. I am the boyfriend of the woman with the largest breasts in Europe." Ahh... true love and body dysmorphia.
20%