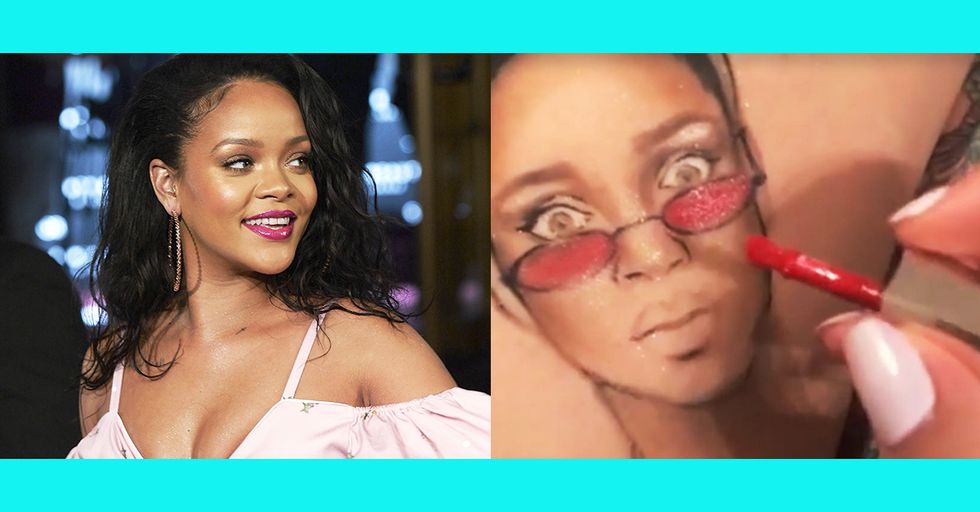 Our Lady of Fenty launched the year by having the most smashing time at carnival in Barbados, an event she duly dressed for in the most amazing carnival costume ever, launching a thousand gifs, and one of the sultriest, thirst-trappiest pictures of 2017.

Then, in the summer, she made walking around with wine a thing, after which, to top it all off, she blessed the world with Fenty Beauty.

You remember Fenty Beauty, the inclusive makeup brand that toppled Kylie Jenner's lip kits from their throne and had retailers scrambling to create makeup in all shades of the rainbow because they realized, for the first time in centuries, that women of color not only enjoyed makeup, they bought it.

Fenty Beauty minted Rihanna a very pretty penny. It made her $75 million... in a month. Yes, you read that right. One month, $75 million, which begs the question, how much will it mint her eventually?
In any event, women of color have long stanned for Rihanna, and Fenty Beauty was proof that she loved them back... or, at least, she was smart enough to realize the untapped potential of a commonly overlooked market.
In any event, between all her endorsement deals, albums, concerts and general social standing, Rihanna is now solidly the most marketable celebrity on the planet – leagues behind her next competitor, Beyonce.

Take a bow! Rihanna is crowned the most powerful celebrity influencer https://t.co/qXTzNbpFUO via @Femail #Riri
— A M Grundy (@A M Grundy)1513363884.0

Now, one Prague-based tattoo artist is celebrating Rihanna in the most original way ever. With her own makeup.
23-year-old tattoo artist Alena Wedderburn is a Rihanna superfan. The former competitive skier began taking architecture and design classes at 17,  and attended art school in the Czech Republic. Rihanna, Wedderburn says, has always been her inspiration.
She first met the superstar backstage in Amsterdam, during her 2013 world tour. "It was an experience of a lifetime for me," Wedderburn said. "She is so unbelievably humble and down to earth."
The star even started following her on instagram, and for good reason. Wedderburn is supremely talented. And, she's pretty much able to draw Rihanna in any medium – pencils, paints, watercolor, you name it.
When the popstar launched Fenty beauty, Wedderburn saw another way to express her love for her idol. She began drawing Rihanna on her body, using Fenty products.
Thus far, she's used most of Rihanna's products, but there's one thing she hasn't been able to get her hands on yet – Fenty's latest Mattemoiselle lipsticks.
"They seem to be so fun to paint with!" Wedderburn said, and we're going to take her word for it. The girl seriously knows her way around some makeup.
Even more striking, Wedderburn is new to drawing. As she explains, "I started drawing with makeup two years ago. I was pretty much playing around with makeup and started drawing on my leg, and it came out pretty good."
Despite her late start, she's already way better than most people out there. We can't wait to see what she comes up next. Oh, and Rihanna? Please send this girl some makeup.