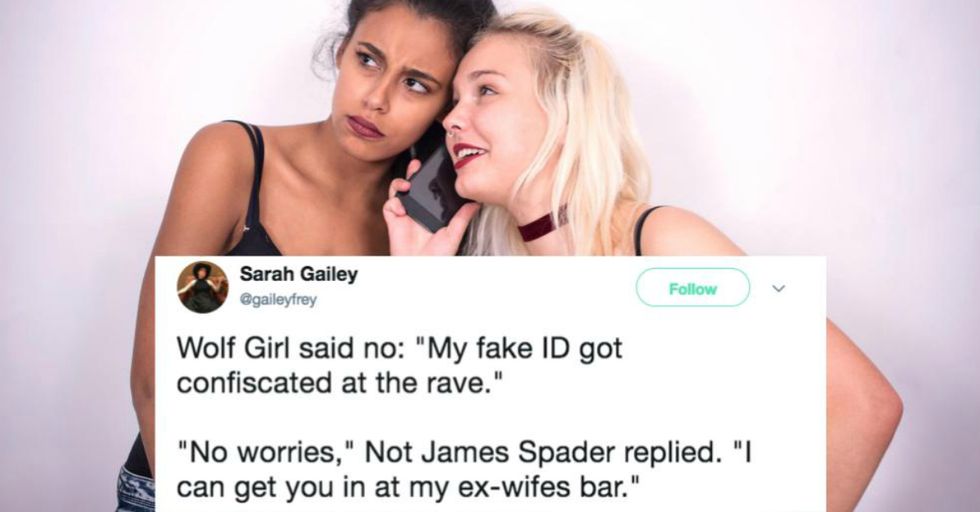 This Woman Live Tweeted an Overheard Love Story About 'Wolf Girl' and 'Fake James Spader,' and It's Weirdest Thing We've Ever Heard

Have you ever heard the legendary tale of Wolf Girl and Fake James Spader? It's a tale as old as time: Boy looks like James Spader. Boy meets Wolf Girl. Boy and Wolf Girl live happily ever after... maybe?

Strap yourself in for a wild ride, because this story contains as many plot twists as an M. Night Shyamalan film.

On October 25, a Twitter user by the name of Sarah Gailey made the Internet an offer it couldn't refuse.

Who wants to hear the story of the date I witnessed between Wolf Girl and James Spader's Lonely Doppleganger? I HOPE IT'S YOU
— Sarah Gailey (@Sarah Gailey)1508978652.0

You're probably thinking to yourself, what could possibly be so interesting about a so-called "Wolf Girl" and a man who looks like actor James Spader? Let's find out, shall we?

The story starts off somewhat innocuously.

Gailey settles in for a "Fancy Alone Dinner", which, to be honest, sounds pretty amazing. Who's a better dinner date than yourself? There's no boring chit chat, no loud eaters (except for maybe you) and you're left to listen in on other, more interesting people's conversations. And Gailey hit the eavesdropping MOTHER LOAD.

Shortly after being seated, she looks up from her menu to see a man who looks oddly familiar.

It turns out, he happens to look EXACTLY like Hollywood's James Spader, who's starred in such hits as The Practice, The Blacklist and Secretary.  Gailey clarifies that it "ain't him", though.

He then proceeds to stare at Gailey strangely for what feels like a very long time.

She gives him the universal expression of "what're you looking at?" while she eats her delicious-sounding duck. Finally, it happens.

The fake Spader's date for the evening appears.

Gailey describes her as looking somewhat unkempt, which is explained when she gives her reasoning for being late: She was at a RAVE and lost track of time. To be fair, hasn't that happened to everyone? It's hard to look at your watch whilst raving.

It's here where we find out how Wolf Girl got her rather strange moniker. She's wearing a WOLF. ONESIE. Take a minute to imagine this whole scene playing out.

Wolf Girl then proceeds to "raarr" at the poor man who got all dressed up in a suit for the occasion. Although we're wondering how he didn't see this coming if he knows this girl even a LITTLE bit.

Then, in yet ANOTHER mind-blowing twist, this happens.

Fake Spader drops a bomb that makes us think that maybe these two people are actually perfect for each other after all.

We were not aware of this fact, and are pretty sure it is complete crap. But fake Spader seems pretty adamant about it.

Gailey and the waitress share a moment of disbelief at the sheer insanity of the couple beside them.

How do these people really exist? And why don't we ever get to experience them in real life and then have an amazing story to tell afterwards?

But it gets even better, somehow.

Spader goes on to explain to his ridiculously gullible date that pigs in fact dine on an almost exclusively cat-based diet. Who knew? Not Wolf Girl! And it seems to have changed her whole outlook on life.

And finally, the pièce de résistance:

There's almost too much craziness going on here to fully process. It leaves us with so many questions. Her fake ID? How old is she?! His ex-wife? How old is HE?! Why does he regularly patronize his ex-wife's bar? Why are they still spending time together after both revealing that they're complete nutjobs? ...and do pigs really eat cats? If you know the answers to any of these questions, please let us know ASAP.