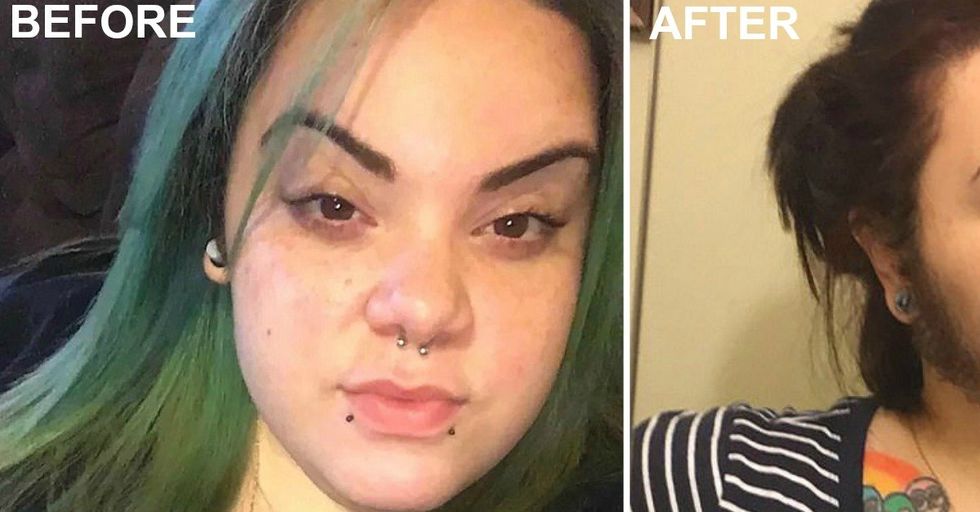 Woman With PCOS Refuses to Shave Her Beard, to the Outrage of Keyboard Warriors Everywhere

When you're born different, there's an obvious and understandable desire to want to blend in.

Sure, individuality is praised, but sometimes, being an individual, constantly explaining yourself, takes energy that some people would just rather not expend.

One of the most basic reasons for this is that those who blend in don't tend to get singled out by bullies.

In this age when you can get harassed online even more easily than one could in person, the path of least resistance is certainly an attractive one.

That's especially true if you're different in a way that would likely draw criticism or mockery.

People can't help the way they're born, or who they truly are inside, but that doesn't stop bullying from occurring over those very aspects of their life.

It's the people who take their differences and celebrate them, rather than hide them, that make a big difference.

Not only do they inspire others to be proud, but they take the limited ammo bullies have and strip them of it. It's not always easy, but it's almost always effective.

Alma Torres is a twenty-four-year-old photographer from the Bronx, New York, who is using what could be a very negative situation to empower women who are going through the same thing.

At 16 years old, Torres was diagnosed with polycystic ovary syndrome (PCOS), a hormonal disorder which causes enlarged ovaries with small cysts on the outer edges. Among the symptoms of the condition are weight gain and facial hair growth, side effects that have made her go viral. Read more about Alma's story and PCOS on the next page.

PCOS is a common disorder, affecting up to 10% of the female population.

#PCOS is a hormone imbalance that can cause irregular periods, infertility, obesity, and hirsutisum in up to 17 mil… https://t.co/8SwXowAaxh
— PCOSGurl (Ashley) (@PCOSGurl (Ashley))1506771007.0

But it manifests itself in different ways from person to person. Underlying the symptoms is a hormonal imbalance, which is what gives Alma her facial hair.

For years, Torres shaved her face in an attempt to try and hide her rare condition, but now, she's decided to embrace the symptoms, despite the fact she's received a lot of criticism for proudly sporting a beard.

"I have been called 'ugly', others have said I should 'kill myself,'" she told The Daily Mail. "People have told me 'go wax your ugly a**' and have called me 'cancer'." "People usually don't make comments in front of me. Most are over the internet but I will get stares," she continued. "I've noticed people trying to take pictures of me but I just laugh and smile. I know it's not a big deal so I'm okay with it."

Again, this approach isn't the easiest way to live, but it allows Alma to lift her head up high.

Torres also suffers from other PCOS symptoms, such as ovary and abdominal pain, fatigue, irregular periods, anxiety and depression.

Despite the debilitating symptoms, Torres isn't letting the condition bring her spirits down.

"When I was first told, I started crying and I thought it was a really bad thing," she admitted. "They (doctors) said the word 'disease' and I thought it was really bad until I did my own research." "About two or three years ago, I was starting to feel more confident and positive about myself," she added. "I look up to women who are body confident." Alma's not the only one rocking the beard look for both personal and social reasons. Many are flying their flags high saying, "This is who I am."

And now she's hoping to help other women who are also suffering from the condition, by reassuring them that they shouldn't let the negative side effects of PCOS define them.

"Having the beard has made me a better person," she said. "I feel more confident and I want to encourage other women with PCOS to feel the same." "I know how other women feel and I just want them to know that I'm there for them and that you can be who you are and you can be beautiful. "I want to tell other PCOS sufferers that this is who you are but if you want to change it then its fine but if you feel comfortable then don't change," she added. "I don't want to change... I'm happy with the way I am."

Alma's bravery and pride help others in a number of ways.

First of all, she's bringing awareness to the struggle of those with PCOS. Though symptoms like hers aren't the norm, they're not too rare. Many try to hide them, but that's not Alma's style.

She celebrates her condition and herself every chance she gets.

As she mentioned, haters, critics, and Internet trolls all have something to say about that, but she's developed the enviable ability to turn down the volume on those folks and just live her life happily.

Others are doing the same thing, and they all deserve to be recognized for their bravery.

It's not easy, but the right thing isn't always a walk in the park. That's what integrity is: standing up for what's right regardless of the circumstances or difficulty. These women exemplify that to a wonderful degree.

It may not be bravery in the way we were taught to think of it.

But it's bravery nonetheless, and these women deserve to be applauded for what they're doing. THey're standing up for all of us, in every way that we're different. Thanks, Alma! Thanks, others, for showing us we can ALWAYS be proud of who we are.